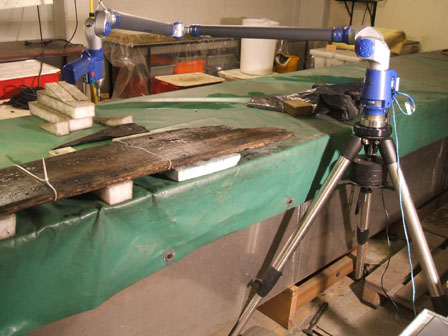 ‘Don’t make fun of the Arm!’ Tori warned, as I departed from the museum.
But I have no intention of doing so. I’m a great admirer of the Arm, in all its blue, grey and silver majesty.

The Arm (pictured) is the, eh, colleague of Tori, a friend of mine who is an archaeologist – an underwater archaeologist, no less – working at Norsk SjÃ¸fartsmuseum, the Norwegian Maritime Museum, which sits at the water on the edge of the Oslo Fjord.
Many’s the time she has been off duty, drinking at my bar, telling me about the Arm, who she felt was probably lonely there in the museum on his own. What fascinated me about the Arm, and the reason I went to see him, was that Tori told me he had many more joints than the human arm, thus can claim to be… superior. You can see his shoulder in the picture, and his elbow, but his ‘wrist’ is where it’s at: it can turn 360 degrees.
What is the purpose of the Arm?
Tori took me away from the public entrance to the museum and took me down a long corridor and then into a darkened room where she revealed to me a big tank full of recently discovered bits of sunken boats from past centuries. Then she took me down to where she worked, a kind of workshop, where the Arm stood pointing at a plank of wood. She explained that the wood came from a boat from 1665. What Toris is doing is using the Arm to measure the contours of the piece of wood, and by measuring many such pieces, she will gain an accurate measurement of the complete boat. The beauty of the Arm is that its measurement is more accurate than some human hand measuring with pencil and paper. Its ‘single point accuracy’ is 0.146mm. Its other beauty is that it can measure in three dimensions. Each plank, once measured, appears on the computer screen in 3D. Here you can see a whole part of the boat reconstructed on the screen. The complete boat will be used to create a model for the museum: 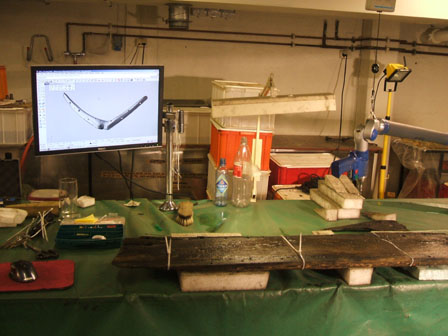 I asked Tori if she and the archaeological community look back on past reconstuctions and models, based on hand-drawings rather than the Arm, and laugh at the primitive work. Tori laughed at my question, but then she answered yes, but I don’t know if that’s the truth – she may have been indulging my imagination.
The Arm was made by Faro, who seem to make an abundance of interesting technology.
Anyway, I hope that in these few words and pictures I have made the Arm, who is never seen by the public, more appreciated and well-known, and that in doing so I have not made fun of him. But, publish and be damned, as they say.