On first glance, *Japanese Movie Posters: Yakuza, Monster, Pink
and Horror* appears to be little more than a catalogue for
DH Publishing’s movie poster business. The last page even provides
details on how to order the posters.

However, *Yakuza, Monster, Pink and Horror* is a delight in itself,
with 96 pages of katana waving gangsters, bald lesbian nuns, giant
pterodactyls, lizards and moths, hardy samurai made up like drag-queens,
and several scantily clad actresses in questionable fetish scenarios.

At the beginning of each section, commentators Tetsuya Masuda and
Kairakutei Black explain the background to the genres, and chart
the rise and fall of the movie stars, the characters and the genres
themselves. Godzilla, Mothra and Radon lead the monsters, Beat Takeshi
and Princess Lum all make appearances. And there’s some wonderful
kitsch, like the ‘pink’ movie *Molester’s Train* – ‘Riding the subway
in just sunglasses and handbag is asking for trouble!’

The ultimate in coffee-table eye-candy. 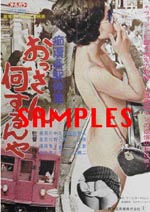 Chief Bottle Washer at Blather
Writer, photographer, environmental campaigner and "known troublemaker" Dave Walsh is the founder of Blather.net, described both as "possibly the most arrogant and depraved website to be found either side of the majestic Shannon River", and "the nicest website circulating in Ireland". Half Irishman, half-bicycle. He lives in southern Irish city of Barcelona.
previous article
2 Seminal books by Aldous Huxley
next article
Druid Shaman Priest by Leslie Ellen Jones