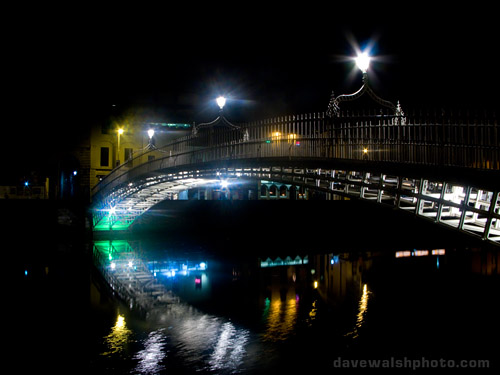 I took this as a long exposure on the railing of the boardwalk, praying the hordes of soccer louts beating seven shades of shite out of each other would fail to notice me. My prayers were answered.

The Ha’penny Bridge, known later for a time as the Penny Ha’penny Bridge, is a pedestrian bridge built in 1816 over the River Liffey in Dublin, Ireland. Originally called the Wellington Bridge (after the Duke of Wellington), the name of the bridge changed to Liffey Bridge, its official name to this day. It is still commonly known as the Ha’penny Bridge. The toll itself was dropped in 1919; before this there were turnstiles either end of it.
Irish Architecture »

Chief Bottle Washer at Blather
Writer, photographer, environmental campaigner and "known troublemaker" Dave Walsh is the founder of Blather.net, described both as "possibly the most arrogant and depraved website to be found either side of the majestic Shannon River", and "the nicest website circulating in Ireland". Half Irishman, half-bicycle. He lives in southern Irish city of Barcelona.
Tags:halfpenny
previous article
Waving for the camera – Busy Pedestrian Crossing at Shibuya, Tokyo
next article
Sydney Opera House, Australia