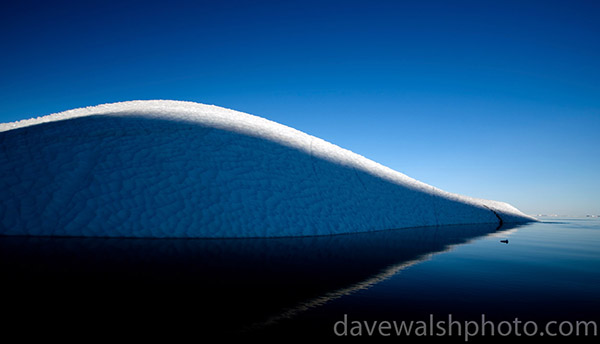 Shadows from the Tailenguak Cliffs fall on an Iceberg calved from the 110km wide Humboldt Glacier, Kane Basin, Nares Straight, Greenland, 16th July 2009. Kane Basin forms a graveyard of stunning icebergs, mostly kept in the basin by weather and current. The photograph was made by Dave Walsh from an inflatable from the Greenpeace ship Arctic Sunrise, which spent much from June until August working in this remarkably remote region, studying the effects of climate change in the Arctic, and enabling a team of independent scientists to carry out research work on two of Greenland’s largest glaciers, Peterman and Humboldt, each thought to be responsible for 10% of Greenland’s ice output. So far, glaciers at this latitude have not reacted to the effects of climate change like their counterparts in southern Greenland – but it’s only a matter of time.

When explorer Elisha Kane crossed this area in 1854 this area would have been covered in sea ice, even in summer. In fact, while Kane’s expedition reached the Humboldt Glacier by sled, The Arctic Sunrise was able to sail right to the Glacier edge without any real difficulty. The Nares Strait itself – only navigated by a small amount of ships in the last half-century, was ice free in June 2009 – the first time in recorded history.

Chief Bottle Washer at Blather
Writer, photographer, environmental campaigner and "known troublemaker" Dave Walsh is the founder of Blather.net, described both as "possibly the most arrogant and depraved website to be found either side of the majestic Shannon River", and "the nicest website circulating in Ireland". Half Irishman, half-bicycle. He lives in southern Irish city of Barcelona.
Tags:iceberg
previous article
Svalbard Global Seed Vault
next article
Twist and turn: Petermann Glacier