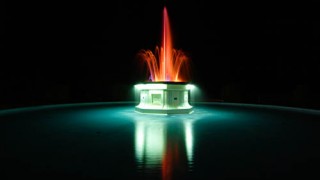 .flickr-photo { border: solid 2px #000000; } .flickr-yourcomment { } .flickr-frame { text-align: left; padding: 3px; } .flickr-caption { font-size: 0.8em; margin-top: 0px; } Tom Park Fountain, Napier, New Zealand, originally uploaded by blather. Download the high resolution version » Tom Park Fountain, Napier, New Zealand. Napier is New Zealand's Art Deco town - completely rebuilt in 1931 after an earthquake. Tom Parker owned a men's outfitters shop in Hastings Street and was a colourful town character who made many gifts to worthy causes and to the city. On one of his regular visits to Britain he was impressed by a modern, illuminated fountain at Bournemouth. On returning to Napier he donated Â£1,000 for a similar fountain which was built on an area previously occupied by a children's playground.

More Art Deco - Napier was levelled by an earthquake in 1931 - so all the buildings that sprung up were in the then fashionable Deco style. (this photograph is available via davewalshphoto.com)

This is where I'm staying last night and tonight. With the masons! Get high resolution version »