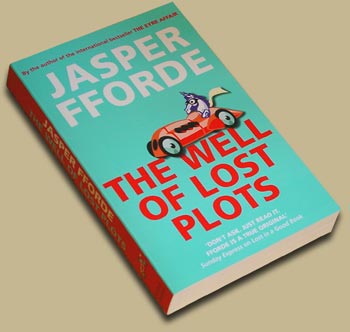 Fforde himself is appearing in my local Waterstones book store in Brighton for a reading/signing/me grovelling abjectly on the ground beneath his feet like the mangy cur that I am, in about two weeks time. And yesiree bob I have a ticket. I shall endeavour to get myself an introduction if I can and will, I have no doubt, be forcibly ejected into the street. But for our Blather readers I am willing to risk all.

For those of you wondering who the hell and what the hell I am talking about, check out this review of ?Lost in a good book? which I wrote last year. It’s probably just going to confuse you, but you?ll get the general idea. Think Douglas Adams on speed in an alternative universe, meets Flann O?Brien doing Mad Max with genetic engineering and you?re heading in the right direction. Sort of.

Buy this book. Laugh your ass off. Realise you will never write anything close to as good as this. Wail bitterly into the kitchen sink. Sense that it’s all going to be ok. Smile and have a cup of tea. Because the world ain?t all that bad a place when books like this are being written.

Read more here at Ffordes’s website, which is almost as amusing and labyrinthine as one of his novels. Fabulous stuff and worth spending some time poking around.

Purchase The Well of Lost Plots from Amazon.co.uk

Damien DeBarra was born in the late 20th century and grew up in Dublin, Ireland. He now lives in London, England where he shares a house with four laptops, three bikes and a large collection of chairs.
previous article
The last Irish Wolf
next article
The adventures of Jasper the Time Travelling Cat (Volume 1. Episode 5)