Giant bunny rabbits, chocolate eggs and the story of some guy called Jesus. As the season arrives, Sue gives you the low-down…

When I was a small(er) girl, Easter was a time of great mystery. The statues in the church covered up, the gory story of Jesus’ death and the excitement of egg hunting on Easter Sunday all added to the strange atmosphere on Easter week.
It was perplexing, this mixture of crucifixions and chocolate. And what about having to kiss the statue of Jesus? That gave rise to a few strange nightmares I can tell you…
I have since been interested in the symbolism of that week, the death and rebirth themes which mirror nature’s cycles, and how religion tries to express and explain them. These themes predate Christianity; in fact the word Easter comes from the Spring Goddess Eostre, who gives her name to the female hormone oestrogen.
**A certain Friday**
The Easter bunny, originally a hare, is linked with the Spring Goddess and the moon, along with eggs which symbolize fertility. There are stranger and sinister Easter traditions from the past centuries, which make ours seem mild in comparison.
Traditionally, Good Friday was, meant to be a day of mourning, a day for fasting and prayer. However, because of the ban on working that day, it was far from gloomy for some individuals. Confusion also sprang from the name ‘Good Friday’; this originally came from ‘God’s Friday’.
This confusion leads to conflicting statements such as; “bread baked on Good Friday is lucky and cures all ills”, (Northamptonshire 1851). But “he who bakes or brews on Good Friday will have his house burnt down before the end of the year”. (Northhamptonshire 1851).
Alternating views arise about being born on Good Friday. Therefore – ‘The birth of a child on that day is very unlucky – indeed a birth on any Friday of the whole year is to be deprecated as a most unfortunate circumstance’ (Wales 1880)
While on a more positive note: ‘Unlucky to be born on a Friday, unless it is a Good Friday’, (Lancashire 1870). This was compounded by the belief in Ireland and England that Friday was the unluckiest day of the week.
Shedding blood on Good Friday is to be avoided – “A story told me years ago by a former servant, which I recollect made a deep impression on me at thetime… She told me how her father one Good Friday tried to kill a pig, notwithstanding the traditional unluckiness of the day; but in vain, as the pig would not die, and he was at length compelled to abandon the attempt for that day”, (Devon 1883).
Washing on Good Friday was also frowned on, explained by this Birmingham story from 1925 – “ my mother always told me not to pour anything down the sink till after three o’clock on Good Friday, because the gutters of Jerusalem was running with our Lord’s blood up till three o’clock”.
**A lot of blood**
Washing clothes was especially prohibited, calamities could occur if this was not observed; clothes hung out to dry splattered with blood, soapsuds turning red. There seemed a lot of Jesus’ blood to go around. There was a danger that a member of the family could die from their clothes being washed on this day – because they were ‘washed away’.
Easter traditions were perhaps more cheery than Good Friday. The widespread belief in England and Ireland concerning ‘sun dances’ has connotations of a U.F.O. sighting:
‘To this pool the people used to come on Easter morning to se the sun dance and play in the water and the angels who were at the Resurrection playing backward and forwards before the sun’. (Radnorshire)
When the sun rises on Easter Sunday, it ‘dances for joy’. This could be viewed either directly by gazing at the sky or through a pool or bucket of water. If the eager observer cannot see it, this is put down (conveniently) to a lack of faith, or the fact that the Devil always attempts to obscure the sight.
Even animals celebrate this day, as this Irish belief from 1951 notes: ‘most of the beliefs in this country are traceable to Christian origins, the belief that donkeys kneel at the moment of sunrise on Easter morning, for instance, that they bray three times at sunrise on Good Friday’.

**Odds and sods**
Other Irish Easter week customs include:
‘Obtain new clothes for Easter Sunday’ – in case any had been washed on Good Friday?
‘Clean your house for Easter Sunday’, to remove any bloodstains, I
presume…
‘Maintain quiet on Good Friday from noon to 3pm’, useful while sleeping off a hangover from the night before.
‘Cut your hair on Good Friday to prevent headaches in the year to come’, but if working is prohibited, where can a hairdresser be found?
And finally – make sure to ‘die on Good Friday’, as your rapid entry in to heaven is assured.
**Easter in Eire**
The most interesting, bizarre, and perhaps disturbing Easter custom in Ireland was ‘The Procession of the Herring’. This was carried out in numerous Irish towns, symbolizing the end of Lenten abstinence. The procession was organized, and usually led by the town butcher, who was probably glad to be back in business after Lent.
In Dundalk, a herring was hung on a long stick and paraded through the town. This was followed by anyone who had suffered economically in the previous year. Carrying sticks, they would beat the herring into little pieces, before hurling what was left, along with insults, into the Castleton River. Decorating the stick with flowers and ribbons, the crowd would then make their cheery way home.
In Drogheda it was called ’whipping the herring’. Here boys would tie dozens of herrings to a rope and drag them through the town, pursued by more boys armed with whips and sticks.
In Cork a single herring would be paraded through the city on a stick, while crowds shouted and jeered at the poor fish. Most people were delighted to see the end of fish dinners after Lent and glad to be eating meat once more.
Easter Monday was the day that Dublin people had their ‘Funeral for a Fish’, usually dressed in outlandish garments. What makes this violent and strange tradition even stranger is that nowadays the fish is a symbol for Jesus and Christianity. It was an odd reaction on a day that was meant to symbolize Jesus’ rebirth.
This week, I will be tempting fate by trying out some of these superstitions; washing my clothes on Friday, cutting my hair, getting up early on Sunday to see the sun dance. And if you happen to see a girl running through the streets with a fish on a stick, it could be me… 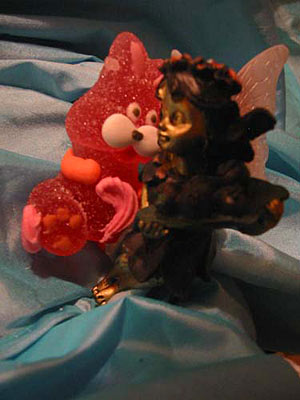 Easter Bunny gets it on with fairy… 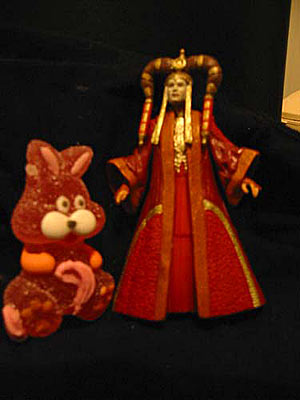 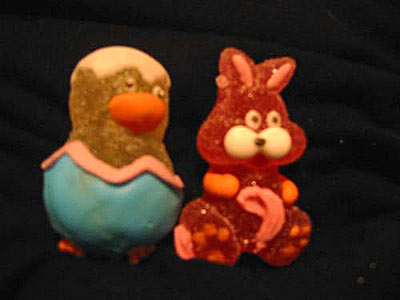 Easter Bunny goes out with a chick 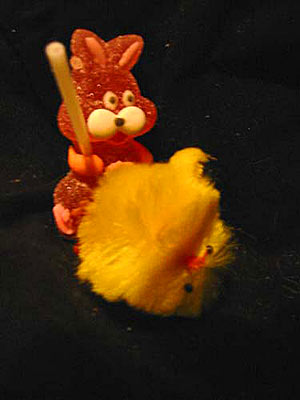 Sue Walsh was partly brought up by cats in her native Wexford, where along with her brother, she scoured the river for junk. At the age of three her mother caught her carrying kittens in her mouth. She lived in the woods for a while, then the lure of the stage was too much, and she ran away with a theatre company. This enabled her to keep her multiple personalities happy, and so she is continuing to act whenever the opportunity arises. When not on stage or the silver screen, Sue can be found scribbling away and conducting séances. She is still scouring the river, hoping to find treasure in amongst the junk, just like Suzanne in the song...
previous article
The Haunting (part 3)
next article
Twin Peaks: Motif Watch