Dave escapes the gravitational pull of London, stopping off for a mid-winter visit to Britain’s best-known megalithic site…

I should have had these photographs online a week ago, but a series of events – some unfortunate – conspired to prevent me from doing so. I had to endure moving back London to Dublin (utilising a car ferry), a broken exhaust, a bad cold, moving house in Dublin, Christmas, and hell knows what else.
After having spent the last quarter of a year in England, it’s early on the night of the 20th that I finally escape the gravitational pull of London. Once beyond the M25, and plugging along the M4, I achieve escape velocity, make for Devizes.
The next morning, 7am, I’m riding shotgun in Neil Mortimer’s car. Neil’s a resident of this neck of the woods, and an expert on the surrounding antiquities. Salisbury Plain was enveloped in fog. It’s long before sunrise, but there’s light in the sky. As we approach our destination, cars loom out of the greyness, and hooded figures huddle towards the car park. People are parked miles from Stonehenge, making their way by foot. Odd this, as the car park is empty. We actually manage to park right beside the car park. This is inexplicable.
We join the sleepy crowds that pass under the road tunnel and towards the great megalith. On the way, a burly security guard hands us flyers detailing everything that we can’t do at Stonehenge – climb the rocks, damage things, invoke the god pan, have crazed open-air ritual sex, or cannibalistic rites. I assume that’s what it said, I didn’t read it.
The huge stones are barely visible in the fog, even from 50m away. There’s a slightly unreal quality about the setting – bearded druids running around with staffs, and witchy types running their hands over the stones. I resist the urge to run up and tap the stones with my knuckles, just to be sure that I’m not at some alternative Stonehenge, as a movie set.
Hundreds of people are collected in the centre, and others mill around the outside. Photographers, security men, picnickers, hare-brained hippy types with flowers in their hair. As we walk around the east side of the circle, a procession arrives behind us, after walking the perimeter, carrying small lights on sticks. A woman in the group shouts out “Happy Solstice everyone!” in a very Terry Jones voice. They proceed into the circle, and some kind of ritual begins. It’s too crowded, we elect to stand on bank to the west of the henge, and watch the sun come up.
I’ve got the camera up on the tripod. Before us, a young hippy chap with a feather in his hair and a beatific smile upon his face is concentrating on building a small pagan shrine of incense, feathers and other things upon one of the small ‘station’ stones that surround Stonehenge. Next to us, a druidic-looking chap is posing for some news photographers – apparently he’s known as King Arthur Pendragon, and is head chieftain of the British Council of Druids.
The sun breaks the horizon around 8:10. However, with the fog, it’s hard to see any more than a dim brightness towards the southeast. Finally a glimmer – a wan light breaks through, provoking a small cheer from inside the circle. The sun vanishes behind the fog, and visibility decreases again. Some people leave, now that the sun is ‘up’. Others wait – a good idea, as at about 8:40, the sun finally burns through, sitting right above one of the Trilithons. It’s beautiful.
Minutes later though, the Terry Jones lady is shouting ‘goodbye’ in a ‘please leave now’ sort of way. The security guards are herding people away from the stones. We drive back to Devizes, with one stop-off, for me to photograph the ‘tank crossing’ signs that litter the Salisbury Plain military area.
Within a couple of hours I’m back on the motorway, making for North Wales. The trip is uneventful until I pull into a car park at Holyhead, two hours early for the ferry. As I put on the handbrake there’s a clang. My exhaust has fallen off. Thanks to the AA, I manage to limp onto the ferry to Dublin, the little red blathermobile sounding like a chain-smoking Massey Ferguson.
Stonehenge on Wikipedia »
Stonehenge on the Modern Antiquarian »
Andy Worthington – author of the books Stonehenge: Celebration & Subversion and The Battle of the Beanfield &raquo
amazon.co.uk: Stukeley’s ‘Stonehenge’: An Unpublished Manuscript, 1721-1724 » – Aubrey Burl (Editor), Neil Mortimer (Editor)
amazon.com: Stukeley’s ‘Stonehenge’: An Unpublished Manuscript, 1721-1724 »
amazon.co.uk: Stukeley Illustrated: William Stukeley’s Rediscovery of Britain’s Ancient Sites » – Neil Mortimer
amazon.com: Stukeley Illustrated: William Stukeley’s Rediscovery of Britain’s Ancient Sites »
High resolution versions of these photographs from topfoto.co.uk » 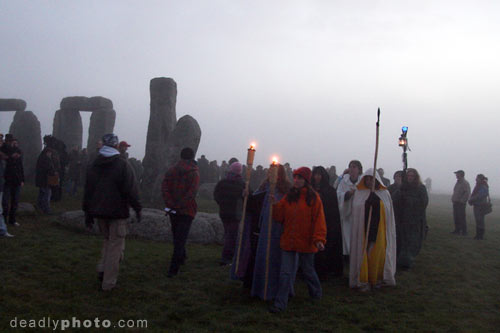 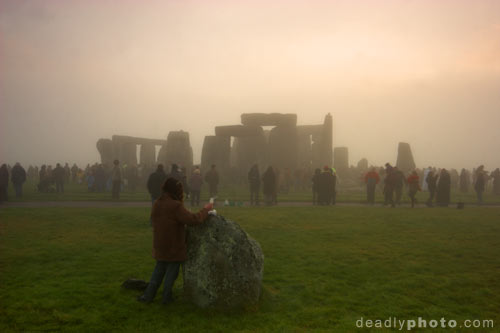 Making a shrine on a station stone 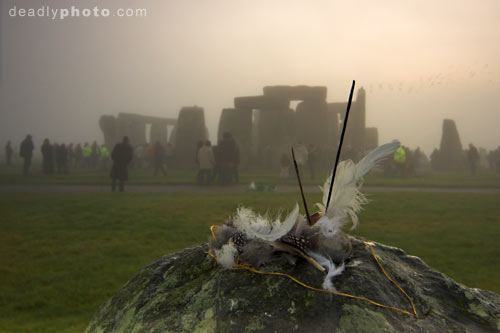 The shrine. Not the plume of smoke from the incense… 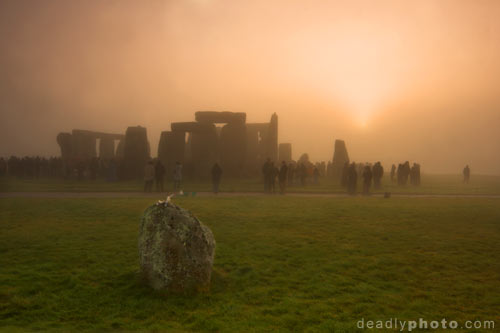 The sun makes a brief appearance 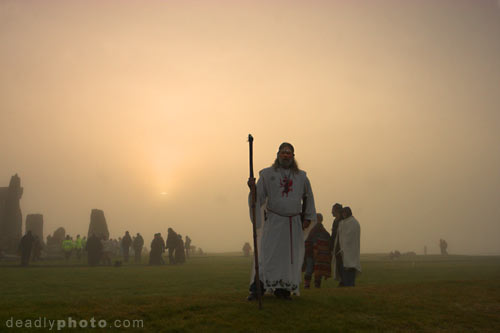 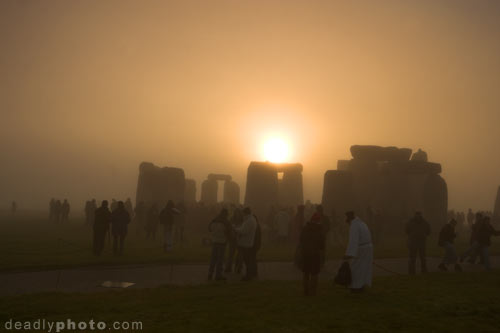 The sun returns, rises above Stonehenge 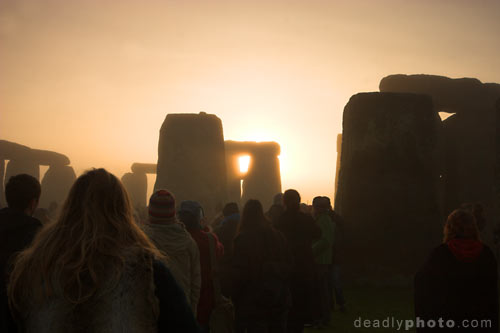 The sun, captured by Stonehenge 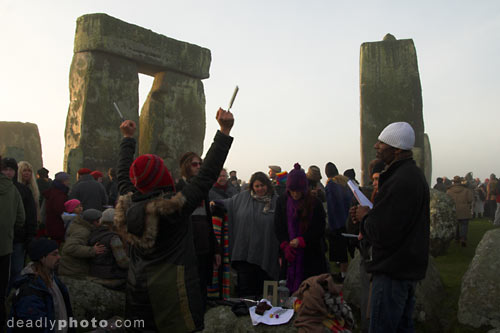 Rituals taking place inside the circles 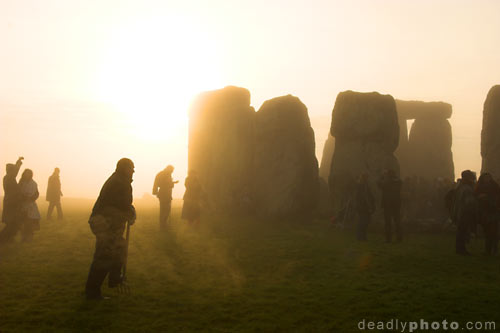 The sun through the fog – very atomospheric

High resolution versions of these photographs from topfoto.co.uk » 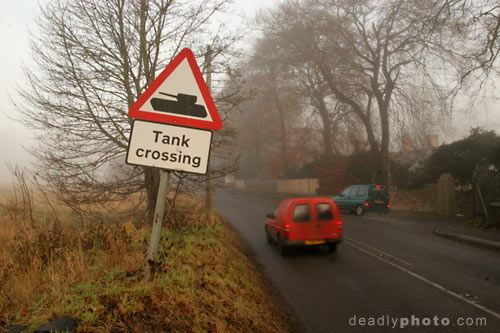 Chief Bottle Washer at Blather
Writer, photographer, environmental campaigner and "known troublemaker" Dave Walsh is the founder of Blather.net, described both as "possibly the most arrogant and depraved website to be found either side of the majestic Shannon River", and "the nicest website circulating in Ireland". Half Irishman, half-bicycle. He lives in southern Irish city of Barcelona.
previous article
Christmas in America
next article
Waking the Dead: the Crossbones Graveyard