Diggin’ in the Dirt: I, Patrick. (Puke the First) 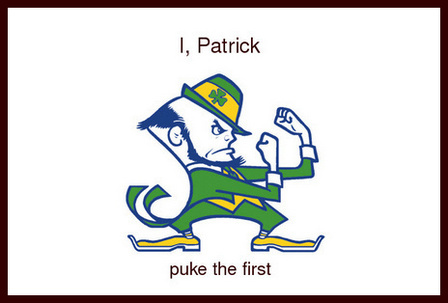 With March 17th fast approaching and Dublin City Council already making preparations for cleaning up the deluge of white foamy piss and green/orangey puke overflowing the gutters in the streets, Blather.Net’s Archaeologist of the Damned and Resident Graverobber, Ender Wiggan, unearths the truth behind the blow-in from Britain; in whose honour the annual national stereotype perpetuation festival is held. The first of a six-part series, “I Patrick” is a vast, sprawling epic tale of war, slavery, religious fundamentalism, rape, murder and dying empires. Or, it could just be a load of begorra, begob, musha man divil alive paddywhackery.

Next
Read “I, Patrick”. Puke the Second
+More+
See the full Diggin’ in the Dirt category of articles

previous article
Happy Humpback Whale Christmas from the Southern Ocean
next article
Diggin’ in the Dirt: I, Patrick. (Puke the Second)