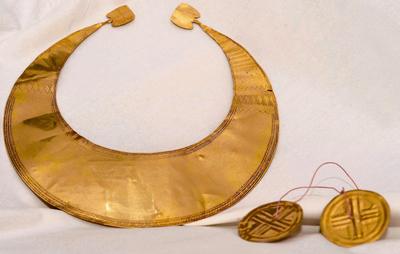 Hats and Fedoras off to the Gardai in Roscommon and Dublin, who (obviously having had their morning Weetabix last week) noticed something fishy about a haul of stolen goods they had recovered from a Dublin house.

In amongst some items recently stolen from a Strokestown chemists safe, was a wonderful Bronze Age gold Lunula and two gold Sun Discs. It appears the (deceased) owner”s daughter had NO idea of the value or the age of the artefacts. No idea. At all. I suppose that’s why she had them locked in a safe for 40 years. Because she had no idea. At all, at all. Ha. Fancy that. Um. Yeah.
This is the sad reality of treasure seeking, gold digging, metal detecting, MONGS in Ireland today and in recent decades. Open landscape archaeological sites are consistently targeted and raped by such people. Unknown sites sometimes remain unreported for years, as the original pillaging bastards, I mean, chance finders (who happened to be WALKING over a piece of land WITH a metal detector, which just HAPPENED to turn itself on at that exact moment) keep schtumm while they make sure that anything detectable is yanked out of the ground first.
It illegal to use one of these machines without a license, but that doesn’t stop some people. Objects such as these are ‘removed’ from their original archaeological contexts and priceless archaeological information is lost forever. The beautiful Lunula and two gold Sun Discs can tell us Sweet Fuck All now, about the Bronze Age people who buried these items in a hoard, over 4000 years ago.
Following the Derrynaflan Hoard court case in the 1980’s current Irish law states that any and all artefacts found, belong to the state and must be reported. The National Museum doesn’t have to reward anyone for doing so, but does operate such a scheme to ‘encourage’ reporting. Such priceless artefacts belong to ALL the people of Ireland who share the right to have such national treasures safeguarded and presented to the public. Along with the right NOT to have to pay inordinate prices to get their own heritage back from other thieving Irish cunts, I mean, people, who plundered it from its find spot in the first place.
Ireland has one of the most progressive legislation in Europe when it comes to this type of thing. Spare a thought for our neighbours in England, where metal detecting on private land IS legal. Known battlefields and archaeological sites which have not been scheduled by the government are sometimes used to hold metal detecting ‘rallies’, with the landowners permission. The Portable Antiquities Scheme is sometimes forced to set up a stand just outside the entrance to the land, in the hope that ‘participants’ voluntarily bring over their finds for examination. It is a rare case where Ireland leads the way on certain issues and legislation.
Now, of course the Strokestown find was probably nothing of the sort. At all. The said items will be formally presented to the National Museum sometime this week. No doubt through gritted teeth. But all’s well that ends well. Thanks to several thieving bastards, separated by four decades, we can now take solace in the fact that as it went unreported to the Museum, there’s no need for a ‘finders fee’ to be paid.
What a stroke of luck.

Ever quick on the draw, Paul Barford beat me to it on the news of today’s report in the Irish Times concerning the suspended sentencing of individuals involved in the above case.
Would it be a little smug if I pointed out the irony (beep beep) to metal detecting enthusiasts across the water that even a couple of drug addicted thieves, when confronted and informed of what they had inadvertently thrown away, were civic minded and willing enough to show the police where the priceless items had been dumped? Even later, to visit the said items in the museum, where they are held in trust on behalf of all the people of Ireland?
Yes, I rather think it would.

The gold objects are now on display in the National Museum, Kildare Street, Dublin.
More here