I want to write about Norwegian art, so of course I must start with the best-known Scandinavian artist of all, Edvard Munch (1863-1944). Pictured here is a version (from 1893) of his most famous work The Scream, behind bullet proof glass (see the shine?) at the Munch Museum in Oslo. The security features didn’t exist until recently.
Last year, armed robbers grabbed a more famous version of the painting (Munch made five), along with his Madonna, and now the Munch Museum has airport-like security. It’s a very different place to the one I first visited three years ago, when movement through the galleries was not so restricted. However, this museum will always be an exciting place to visit, as it is the largest collection of Munch’s works to be seen, because he left his estate to the city of Oslo. Recently I have also seen the Munchs in the Rasmus Meyer collection in Bergen, and those in the National Museum in Oslo.

Something I can’t avoid noticing about the symbolism in his work is that it’s very of-its-time. The epoch of Freud and Jung was very much concerned with sex, death, and archetypes of human existence, and Munch expressed these things in his art. For example, a recurring motif in Munch is the concept of the three stages of woman: the virgin in white, the sexually active woman in red (or naked), and the old woman in black.
Munch expolored symbolism, but what I find interesting about his motifs, taken as a whole, is that they are individualistic. When his Frieze of life paintings are displayed together, they are far more idiosyncratic than an established set of Jungian archetypes or “major arcana”. Munch’s symbols are free, in that sense.
The way he represented his own life in his work has an emotional impact and an intimacy that still affects people today. But although his personal life was inextricably linked with his art, and although he used a recurring series of motifs that came from incidents in his life, we should not forget that his work is art not autobiography. Many people have had experiences akin to his, yet never created artistic masterpieces. His work has many interesting formal qualities, and it should be noted that these qualities were always changing and developing, as international art itself changed. He had a great knowledge of art history, and his work reflected this, as it also looked forward to the future of art.
A good example of the personal experience of the artist mixed with both an awareness of art history and a vision of the future is The Death of Marat II, 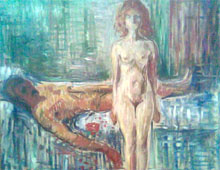 pictured here, the second of two versions from 1907. The painting refers to an incident from the French Revolution. The radical writer Marat was assassinated in his room by a woman, Charlotte Corday. Munch cast himself in the role of Marat, and his ex-lover Tulla Larsen in the role of Corday. The scene of his break-up with Larsen in 1902 was dramatic to say the least: he was shot in the hand during an argument with her. So, five years later, he was referring to the incident in this painting. But this is nothing like a diary, or therapy. Obviously it’s true that he was giving much of himself, but this was a means to an end. Munch’s painting is a re-imagining of Marat Assassinated by Jacques-Louis David from 1793, so it resonates with art history. It’s also very forward-looking: the grid-like patterns in the painting show that Munch was pushing the boundaries of representation. There are abstract shapes like these in many later Munch paintings, and they point to the abstract expressionists who were to emerge later. Munch also, in a way, pre-empted postmodernism with his disregard for the concept of the “original” painting or the “original” expression. He painted multiple versions of many images, or recreated them as lithographs, etchings or woodcuts. For example, each of his five versions of The Scream are equally valid expressions of the image.