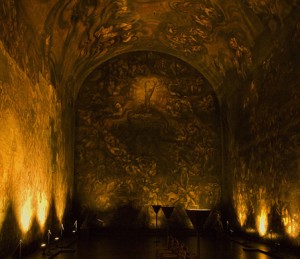 This image of the mausoleum is the main one from the Emanuel Vigeland Museum.

This has already been written about in this blog, back in 2006, but it happens that last year I wrote a piece about it for a magazine that declined to publish it. Also around the same time I reviewed a Charlemagne Palestine concert that took place in the mausoleum, which another magazine declined to publish. It seems that <em>North</em> is as good a place as any to merge and publish the two unpublished articles from June and August 2012.

For travellers: the Emanuel Vigeland Mausoleum

In the midst of the large wooden houses that make up a typical suburb on the west side of Oslo, possibly the most secret of all Norwegian tourist attractions can be found. In this suburb of Slemdal stands a strange brick building – a mausoleum, the final resting place for the ashes of the Norwegian artist Emanuel Vigeland (1875-1948). When it opens to the public, which it does for only a few hours each Sunday, visitors file into a vault so dimly-lit that they cannot perceive the limits of the space; as their eyes gradually adjust to the darkness, they see striking frescoes painted onto the plaster of the walls and ceiling, depicting multifarious images of birth, sex and death, floating out from a smoky background that evokes timelessness or a dream. It’s an unmissable experience if you happen to be in Oslo on a Sunday afternoon.

Emanuel Vigeland began his career as a painter in a German art nouveau-influenced style, and later became known for less secular works – frescoes in churches and in Oslo’s Vestre crematorium. He was the younger brother of the much more celebrated artist Gustav Vigeland (1869-1948), landscaper and sculptor of Oslo’s famous sculpture park in Frogner. In the early 1920s, the city built a studio and home for Gustav there, to work on this vast project, with the idea that the building would become a museum for Gustav’s work upon his death. Emanuel, not to be outdone, also wanted to have his own museum, so in 1926, when he was fifty years of age, he set about constructing a brick building next to his house. He shaped it like a chapel, and it chiefly consisted of one barrel-shaped vault, entered through a very low door. The vault is 22 metres long, 10m wide and 12.5 high and is connected to a 6 x 6m entrance room. A side room was added in the early 1940s as an exhibition space, but in the autumn of 1942 he sealed off the opening to this room from the vault, and bricked up all the vault’s windows. The large room was now to be more than a museum for his work, it was to be his tomb as well.

Over the entrance door is a phrase in Latin, quicquid Deus creavit purum est – whatever God created is pure. The frescoes, eight hundred square metres of them, which he painted from 1927 to 1947, he collectively entitled Vita (life). They depict people, all naked, in one great writhing mass of humanity.

When first entering the room one becomes immediately aware of the sound, with over 40 seconds of natural reverb. This necessitates the issuing of covers for shoes for all visitors (you can also walk around the cold floor in your socks if you wish), to stop excessive clip-clopping ruining the experience. The magnificent echo makes this chamber an occasional concert and recording venue. The most notable recording is the album Vita (2005) by Norwegian folk singer Unni Løvlid, recorded entirely in the space.

The most recent concert at the time of writing was a performance by shamanic composer Charlemagne Palestine, who seemed overwhelmed by the frescoes. The brightly-clad Palestine made use of the whole space, circling the seated audience, playing his cognac glass with his finger and letting loose his cantorial chant, in due course stamping his feet. There was some phenomenon unfolding in his upward glances and head movements; at the end of the performance, his arms directed the applause towards the frescoes and he pronounced, ʻIt’s a great stage you have here!’ Rather than transforming the environment through his shamanic presence and customary ritual, it seemed rather that he was quite affected by the surroundings. His soft toys were arranged against one of the room’s corner sculptures, looking snug and content there, as if there was no extramundane work for them to do. This contrasts with one of his rarely-seen films, Ritual in the Emptiness (2001), which he had screened earlier in the day at Ny Musikk’s office and performance space, along with Island Song (1976). In both films he carried the camera so that the viewer would experience the ritual from his point of view. In Ritual, he tramped around an abandoned factory, chanting at the top of his voice, occasionally stopping for a close-up of his soft toys, which allowed them to effortlessly exude the kind of power they have for children, that is as living entities (Palestine himself calls them ʻbeings’). The effect of the film is that it completely transforms the bleak, empty space with an assertion of subjective energy. Speaking at the screening, he expressed his abhorrence of the former factory and his feeling of wanting to get out of it, a feeling also voiced in Island Song. In the mausoleum, perhaps due to the thrill of being there, his outer life did not require so much inner power.

The frescoes and sculptures

On the end wall, facing the entrance door, a man kneels, offering small babies up to the sunlight, while at his knees is a woman in labour, and arranged around them, like a wheel or wreath, are other such women. There is an ever-present ambivalence here to the abovementioned purity of creation and life. A man hugs himself, trying to ignore his erect penis and a woman’s spread legs, as if he is as horrified by life as he would be of death. Against the blue-black background of the right-hand wall, a man and woman have sex above a pile of skulls; above them is a skeleton holding aloft a screaming infant. Umbilically attached to the woman is a baby boy who is positioned among the skulls as if they are biting him. On the left-hand wall, a woman lifts a newborn baby up into the sunlight. She stands on the back of a grey woman who is sinking into the ground and whose breasts hang like udders. She is surrounded by newborns – another wheel or wreath. The rest of the wall is dedicated to other mother-and-child images, including two beautiful children comforting each other from sadness.

Turning around now to face the entrance wall, we see that in one corner, the artist himself is depicted, twice: an image of him painting with his palette and brushes, and an image of him lying dead with these objects scattered on the ground. An egg-shaped urn, honed from natural stone, placed in a niche above the entrance door, contains the ashes of the artist. The image painted directly above the niche is of two skeletons copulating. From them, smoke swirls up to form a column of babies. This column is immediately reminiscent of the monolith of twisting and turning naked bodies that is the main feature of Emanuel’s brother’s sculpture park. It is possible that he was inspired by this, although the monolith in the park was not unveiled to the public until 1944 and both brothers were working on their legacy projects contemporaneously. It could be an ironic coincidence: the reason the brothers had not been friendly for many years was because Emanuel had been angered by Gustav’s claim that the younger brother used his themes and ideas.

In each of the four corners of the room stands a bronze sculpture, depicting Vita themes in life-size human figures, such as lovers merging together in a sexual act, and a newborn child umbilically attached to the mother who has just given birth.

Obviously birth, sex and death are the basic facts of human existence. Vita, with its naked depiction of the cycle of life and offerings up to the sun, can satisfy various belief systems, whether the Christian notion of God’s creation, the pagan concept of a life-giving sun, or secular humanist ideas about biological reality and self-created meaning. There is also an exclusively artistic interpretation, with the artist as creator, the artist to whom we bow to as we enter through the low door under his urn.

Contact him here.
previous article
Counting Down to 22 January 2013