The story goes that one evening in 1998 some Norwegian musicians were listening to the 1970s German group Neu! and immediately decided to form a new band. This became Salvatore, and they explored Neu!’s greatest invention, the “motorik” or “endlose gerade” drum beat, a 4/4 beat with no fills continuing in a trance-like fashion for an incredibly long time. But this was only the beginning. While their search for euphoric music may have begun with Neu!, they went on to use other kinds of grooves that also have a great sense of affirmation.

Salvatore play instrumental rock music, but this is something quite distinct from the “post-rock” scene. Post-rock tends to be musically complicated, mathematical and almost a kind of jazz. Salvatore use simplicity and repetition with an optimistic, emotional feel. It’s an underground band, but I detect none of the usual urban angst in this music. Instead there is a wonderful sense of spaciousness, like the very lakes or mountains of Norway. In this way, Salvatore very much transcend their German influence.
Previously, members of the band had been in electronic groups, and with Salvatore they managed to successfully mix electronic sounds with live guitar, bass and drums. They have also explored different styles over the years. Perhaps the shifting band line-up, with musicians joining and leaving and re-joining, may be responsible for their diversification into unexpected musical areas. The most recent album, Luxus, includes variations on African music and Jamaican dancehall.
The albums:
The debut, Clingfilm (2000), was recorded in Oslo, and showcases the band at their most rough and motorik, especially with the opening track, “Halloo!” and the similarly lengthy “Antisuper”, which became their live encore for years. There is also a significant element of ambient music here, particularly with the closing piece, “Sea”, which harks back to the era of German acts like Harmonia, long before ambient music was done on computers.
Jugend – A New Hedonism (2000) was the first of two albums recorded in Morocco. It was the soundtrack to a production of The Picture of Dorian Gray by experimental theatre group De Utvalgte. Here Salvatore are less groove-based, and this music is predominantly ambient, abstract and abstruse.
Fresh (2001) was recorded in Morocco at the same time as Jugend and opens with the joyous “Get The Kids On The Street, It’s A Party”, with a tune so catchy it could be the folk music of a forgotten land. Great tunes follow one after the other, with vocal samples and trumpet in the arrangments.
Tempo (2002) was a technical leap, with the production at a much higher standard. It was recorded in Chicago by John McEntire (of Tortoise and The Sea And Cake fame) and opens with Salvatore’s best-yet tune, “Easy”, a surging rush of beauty, like an aeroplane taking off or landing. Five more tunes with the same pure sheen follow, then the album gets somewhat more challenging with the mysterious rock of “Rockefeller 2” and “3”, then comes to a graceful end with the relaxing “Poor Coal”.
Luxus (2004) was another great production job, and again involved John McEntire, this time in mixing capacity. It was recorded by Ingar Hunskaar in Oslo and is the most eclectic of all the albums. It starts with drum impacts and simple pretty melodies in the manner of Tempo, but by the end of this set the listener has been treated to the strange jazz drumming and spring reverb of “Fluxus”; the dancehall of “Roots and Weather”; and the English-accented female vocals of the title track, which is a ten-and-a-half minute epic flying from a wintry melancholy to the celebratory melodies of West Africa. Luxus certainly leaves one with the question, where next?
I saw Salvatore perform at Feber in Oslo this weekend, and even from a concert of mostly new material, it was very difficult to tell what the next album will sound like. The seven-piece on stage inspired wild crowd enthusiasm with their rhythms, but it is hard for me to imagine how this great party would translate to a studio recording. There are moments of dub, there are hints of fashionable synth, there are unprecedentedly extra-sweet guitar chords, but I still can’t answer the question posed by Luxus.
However, one thing hasn’t changed. Not quite rock/pop, and not quite art/experimental, Salvatore occupy an important mid-point in contemporary Norwegian music. Their exploration of music forms does not compromise on heart, and that great feeling I described as euphoric is still there when they play.
Salvatore albums are released on (and can be bought from) Racing Junior.
See also the official Salvatore website.
Had enough of my telephone photographs? Here’s a painting. 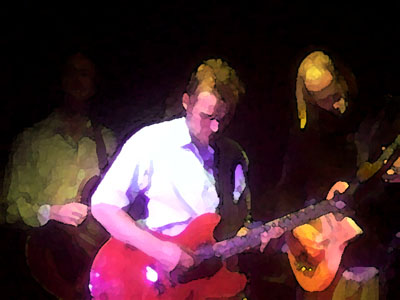