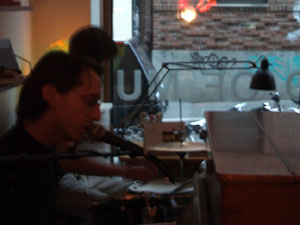 Random picture of me: singing with Dacianos in June 2007. Click for a larger one (a new feature added by popular demand from North readers).
One reader emailed me this list of questions, adding that “What I was thinking was that if you kept a list of some of the more interesting and humorous questions and answers from people (not just me) you could put them on your site for all to read. This would also save people asking you the same questions over and over again.” While I might construct a Frequently Asked Questions page, most of the emails I receive are along the lines of “Am 31 years a Ghanaian based in Italy looking for Norway woman for a serious relationship that i hope to get to marriage” or, occasionally, “Hello, I am a vampire!” So I’ll answer these new questions as a blog entry for now.

How are the people in Norway different from those in the UK? E.G. manners, sense of humour, friendliness etc.
Politeness? Norwegians are generally very blunt, really, and there’s little in the way of politeness. It is not the done thing to say please when buying something in a shop, for instance. Also, a Norwegian can often be seen taking up the whole footpath, completely oblivious to others trying to get past. Bluntness aside, they rarely express their emotions unless they’re screaming drunk. Which brings me to their friendliness. Often foreigners get the impression that Norwegians (and Scandinavians in general) are “aloof”. In fact, they are very shy and introverted, but open up in a very genuine and friendly way once you get to know them. They cannot pretend to be your best friend and tell you their whole life story within 15 minutes of meeting them, as many Americans do. Style of humour? Kind of lighthearted, really. The ones with black humour tend to be fans of British comedy.
Do people tend to be healthier than the UK due to the high cost of foodstuffs?
I don’t see many obese people here. They live close to nature, so get plenty of exercise. They seem healthy enough, but their diet includes far too much lager, coffee and cigarettes. I don’t think food prices affect health. They eat a lot of fish, brown bread and cheese. On the subject of cheese, the other day I was talking to a friend who used to sell Italian cheese to Norwegian restaurants. He said Norwegian cheese has been ruined by hygiene laws: it’s pasteurised until it becomes rubbery and tasteless. The fish is very good here though: it’s still a fishing nation to some extent.
What is the public transport like in Oslo? Do you have to spend ages in the freezing cold waiting, only for two to come along at once and then find that you can’t signal them, as your body has frozen solid?
People complain about rush hour but I have rarely found anything to be late. The trains, buses, trams and ferries all seem excellent to me.
How cold does it get in the winter and what do you do to keep your self from freezing to death when you go outside?
I live in Oslo so it only gets as cold as minus ten. It snows for about three months. You need good boots, wool socks and a coat.
What do you write about and have you had any books published?
I write short philosophical novels, but have also written fiction of varying lengths based on true stories (Han van Meegeren, the Halifax Slasher and Jack Parsons). For the time being, 3 of the 5 novels are available to buy as pdfs on my website. None of them has been published, nor do I expect them ever to be accepted by the publishing “industry”. But I am working with other people on a special project which is likely to see publication soon. I cannot reveal anything about it.
Do you know where your towel is?
Yeah, I have a number of towels in fact. But I don’t have very many possessions.

Contact him here.
previous article
The Psychic Princess (postscript)
next article
Confusion over the Kjeller Incident