Day of the Parasite 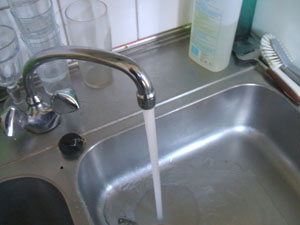 04.30 Wednesday morning. I turn out the light and go to sleep.
06:38am, I’m woken by a text message from my flatmate, who’s away on her farm: “The news tells everybody in oslo to boil the drinking water even to teeth brush.. Fordi det er små parasitter i vannet. Regner med at du ikke hører nyheter.” The Norwegian part of the message means “Because there are small parasites in the water. I figured that you didn’t hear the news.” Yes, of course I wouldn’t be listening to the radio at that time of the morning, I was asleep! Well, well, bad news travels fast, as my father says from time to time. I made a mental note and went back to sleep.

10.25am, I’m woken by another text message, this time from an ex-flatmate, who we’ll call The Elk: “Parasitt oppdaget i drikkevannet i Oslo i natt. Kok i 3 min før du drikker det. Fikk vite av en restaurantkokk nâ nettopp.” This means “Parasite discovered in Oslo’s drinking water this night. Boil for 3 minutes before you drink it. Got to know from a restaurant chef just now.” I made a mental note and went back to sleep.
11.53am, woken again by a text message from an English ex-pat friend, who we’ll call The Lion: “in case u didn’t know> they’ve discovered parasites in the water in oslo, so you’ll have to boil the water for 3 minutes before you drink/clean your teeth.”
11.58am, phone rings, I ignore it.
12.01pm, text message from a Norwegian friend who lives in the building, who we’ll call The Bear: “Det er parasitter i drikkevannet. Ikke server vann i kafé idag. viktig!” This means “There are parasites in the drinking water. Don’t serve water in the bar today. Important!” As I’m the manager of our bar, this is of course an important reminder. [According to the news, ice cubes, filter coffee and machine coffee are also out of the question]. I make a mental note and… ignore another phone call and… get out of bed.
13.32pm, phone rings, I ignore it, but meet codename Golden Child in the bar anyway, to discuss matters parasitic. So what is this all about, really? According to the English-language version of Aftenposten “the Oslo Department of Water and Sanitation discovered the microscopic Giardia lamblia and cryptosporidium parasites at three locations in the Storo district, an area that along with 80 percent of the capital gets its drinking water from the Oset water treatment plant.” Giardia lamblia is a nasty-looking creature, take a peek at the picture accompanying the Aftenposten article.
Alarmingly, the last Giardia epidemic, in Bergen in autumn 2004, “caused at least 6,000 to fall ill and 150 still suffer from nausea, pain and digestive problems.” And we’ve been drinking this water for a while. The company GE Healthcare test water samples every day. They alerted the authorities on October 8th, and have been boiling their own drinking water since Friday 12th. The city’s Water and Sanitation Department did not issue a warning to us citizens until they found more than one sample revealing parasites, and that did not occur until Tuesday night. Read the Aftenposten article, “Parasites found last week“.
Makes you wish you worked for GE Healthcare. Anyway, what next? The parasites come from either human excrement or animal. If it’s human, something has damaged the sewage system and it’s got to be fixed. If it’s animal, that might mean open season on elks in the vicinity of the reservoir. But until the cause is found, we’ve got to live with this problem. Right now I’m going to brush my teeth using a glass of pear-and-ginger-flavoured mineral water. All they had left in the supermarket. I mean, I didn’t get out of bed at 6.38am and rush down there, did I?
Update. 21 October, we’re told we can drink the water again. But who will ever fully trust it again?