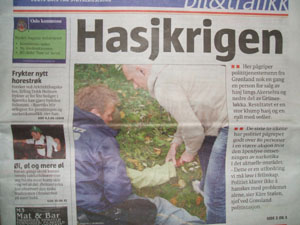 Oslo, 12.45 am. I’ve just done a quick check on the street corner. Nothing.
Usually there would be a bunch of Somali guys selling hash around here, mere feet from the door to my yard. But as you can see from Østkantaivsa of 11 October, Hasjkrigen, “the hash war” is going down. In the picture the cops are arresting someone.

In Oslo, hash is sold quite openly along a route that begins at Grønland T-Bane (tube, subway) station, goes along the river and ends at the street corners of the bottom of Grünerløkka, right where I live. In the first couple of weeks of October the fuzz have arrested over 80 people in their latest clampdown.
Elsewhere in the rag a journalist reports from the front line, accompanying undercover heat along the river. There’s an amusing episode in which two young girl buyers give them the slip, and the officer says “One never knows how they know we’re police. When they suspect that something is strange, they disappear.” But when the rozzers do manage to look inconspicuous, they get to cuff a bunch of other crims. Unfortunately, the dealers are clever enough to hide away most of the gear, so they only have a small amount on them when they’re nabbed. This means they’re back to work on the streets soon afterwards.
As ever it is an issue of supply and demand. I imagine that once this operation is over, it will be business as usual around here again. Even if they put away this bunch of Somalians long-term, they’ll be replaced by another lot. The problem, at the supply end, is sociological: Somalis, who moved here fleeing the war in their homeland, have found it very difficult to integrate in to Norwegian society, and the amount of money one can make selling stuff to smoke is a huge temptation to the jobless. But now the problem is being compounded by people coming from abroad specifically for the purposes of selling here!
At the demand end is the reality that hash is very popular, and the priveleged are always zooming down here in their flash cars to purchase the stuff. They’re all at it, all sorts, grey-haired housewives, the works, all jamming in the name of the Lord. Also, the force recognize that this a situation in which many of the buyers are actually living in the very locality that generates the most complaints about the situation. When will we get to the point in time when the community, or the society in general, will agree on what it actually wants? Why not give the sellers a big café to run and let them sell their wares there legally? Then the smokers could have their smoke and we can have a peaceful riverside too.

Contact him here.
previous article
Oslo Politics
next article
Day of the Parasite