A Farewell to Beamish 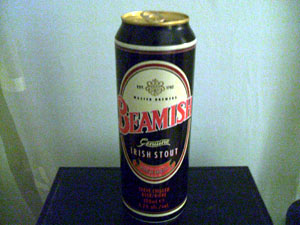 About a year ago, when it became inevitable that I would take a larger role in running our bar business, I decided I might as well make this life liveable by ordering in the drink that I would be drinking at home in Ireland, i.e. stout. As stout on tap wasn’t an option, draught Beamish in can, brewed in Ireland, was a nice and easy alternative (forget Guinness: the stuff you get is brewed here in Norway, like, what’s the point?). But now Beamish is no longer being imported, and we can’t get it.

Obviously the importer wasn’t making a huge economic yield from Beamish. But it seems surprising that in Norway, the second richest country in the world per capita, you can’t get the drink you want! Surely if there’s more spending money, the diversity of available products should increase, and only inferior goods should disappear from the market? But no, it seems that in order to get the desired economic return, firms have to concentrate on mass-consumed products, thus leading us down the road of homogenization and mediocrity. Is there an economic theory that covers this phenomenon? If so, please point me in the right direction because I’d like to read more about it. I’ll have plenty more time for reading now that I can barely drink.
Part two.