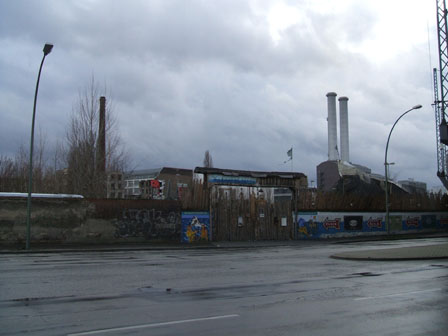 I was in Berlin this week. Yes, this blog has once again crept away from Scandinavia to have a look at the outside world. And I chose to visit a post-apocalyptic wasteland, as you can see from the above picture. 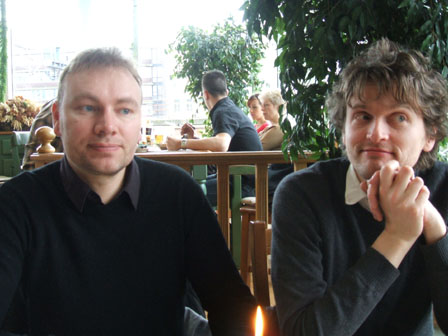 Jon and John (and could those be Germans in the background?)
During the 2+ years of this blog, characters like “Jomba”, “Bjarne” and “Jon” have been casually mentioned. These are in fact the people I met on my first ever trip to Norway back in 2002. The first two live in my apartment building and are involved in the Sound of Mu project, while Jon has recently been recording my band.
Jomba is “involved” in an Oslo-Berlin apartment-swapping project, which means he hangs out there for weeks on end playing in bands and sampling the beer that’s available for purchase morning, noon and night. Jon and I flew over and this overlapped with Bjarne’s visit, so he was there for our first night. We spent our time exploring, and drinking in bars with American singers.
Berlin seems very post-apocalyptic, like an ex-city. The population is decreasing, apartment buildings are being boarded up, and the only influx is from artists, foreigners and escapists. 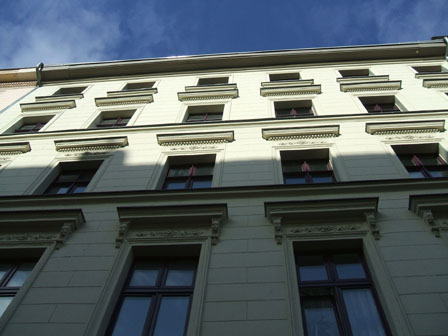 Not everything is falling apart though. I noticed some of that same German architecture as we have at home in Grünerløkka in Oslo. This is the building we stayed in.
Berlin was totally different to Oslo in every other respect. It was more relaxed, there were less RULES, music was played quieter, people enthusiastically partied on Sunday nights etc.
Of course, it was not all about relaxation! We are capable of being serious. For instance Jon, who is supposed to be good at remembering numbers, was subjected to numerical memory testing.

I put all these fridge magnets on a table, shuffled them around randomly, took a photo of it and then took the magnets away. He was then tested at various different levels of alcoholic intoxication to see if he could recall this number. In the not so distant future I’ll also be asking readers of this blog to remember that number. The consequences for not remembering could be very distressing and de-stabilizing, as you will soon understand. 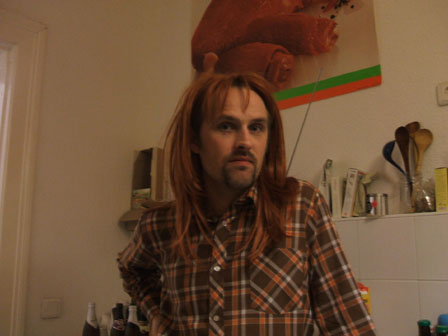 The most important thing to note about Berlin is its extremely high bioresonance. Yes, you read correctly: bioresonance. This can manifest in unexpected bio-growth, often with dramatic colouration, like this “hair” that resonated from the artist formerly known as Bjarne’s head. The antenna you can see protruding behind him only made things worse. 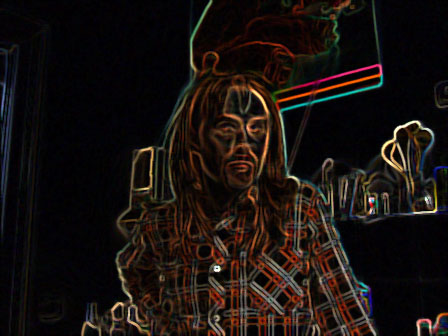 Half an hour later, his bioresonance was oscillating at maximum frequency and we had to de-resonate at 0891255966849 punktows… the correct measurement for bio-resistance. You are advised to remember that if you ever plan to visit Berlin or another highly bioresonant location!!! You don’t want to end looking like the map of the Tokyo subway system.