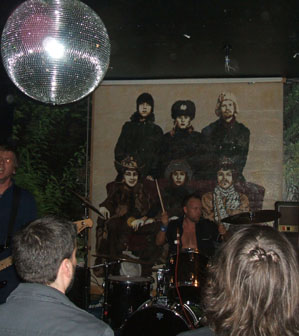 A large bar on the posh side of Oslo, in a building connected to the art academy. Toys, mannequins, porcelain dogs, photographs and junk are everywhere. The staff are wearing robes and wigs. Crazy music is playing. At the back of the stage hangs a mosaic of the eccentric owners, who for some reason are obsessed with Russia, and this is a “Russian themed” bar.
That was Spasibar, which closed down on 30 June.

There’s no need to go into the reasons why: everyone has a different story, and the word on the street contradicts the word in the newspaper. Let’s just say it was no longer a viable business. But it’s bad news for the city’s freaks.
I used to DJ there, and I remember with confusion the scene that greeted me when I came in: the DJ desk upside down in a heap, the dancefloor covered in broken glass that no-one was going to sweep up… Over the years things became a bit more organized. They brought in someone to take care of the sound. We became friends when he built a barrier to keep the audience away from me. And they brought in someone to do the booking. She reached deep into alternative culture and had a booking policy that has been described as everything from “adventurous” to “dreaming”. I became friends with her too.
I took a lot of photos on the last Saturday night of Spasibar, but they have all been mysteriously erased from my camera. I was there to see a DJ friend play a set like we used to do, finishing ecstatically with Neu!’s “Fur immer” (twice), then the Russian national anthem.
There was of course a special closing down party on the last day of the month, Monday 30 June, but I didn’t attend. The arrangement was to pay 500kr in advance and then drink as much as you like for free.
The day after, I discovered from the news that at the end of the night, when there was about 50 people left, a bonfire was lit on stage, the police and fire brigade came, and there ensued some kind of violent altercation between the guests and the police that ended with 6 people getting arrested!
I heard a rumour that they had burned all the 500kr notes that people paid in with!
Well, what did I expect? The freaks had to go out with a bang, and had to somehow top previous acts of madness. Dressing up as a baby, wearing a nappy, and taking a shit on stage wasn’t going to be shocking enough this time.
Anyway, Oslo has now subtly changed, and the West side of the city is more boring than ever.
Update: I found this photo on my camera, mysteriously not erased at all!

Contact him here.
previous article
A Load of Blather in Norway
next article
The Innocence of Sleeping Children