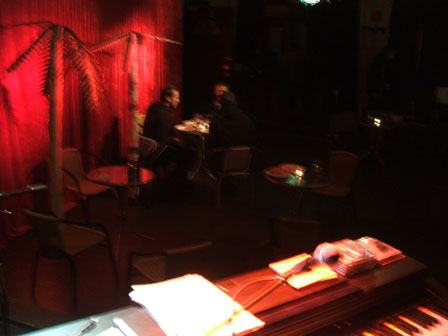 (click for closeup)
On 4 October I took my third trip this year to Skien with the Sound of Mu collective… This time it was the “finisage” of the summer-long Tempo Skien art festival. We converted an extremely commercial-looking venue into a more appealing “cabaret” with fake trees. Two of our bands played: Jae and Dacianos.

Dacianos is of course my own band. The line-up for this show was: Barry Kavanagh (voice, piano, guitar), Håkon Larsen (drums, egg), Marius Kolbensvedt (metallophones, bass, egg), Ilmar Wilbers (cello) and Anne Gunn Fossland (voice). We travelled together with the 3 members of Jae, a driver, our own soundman and two Mu people to set up the exhibition and “do art”. It was also a free food, hotel rooms kind of deal, which I always like!
We (Dacianos) changed our setlist considerably for this show, and seemingly long-term members of our audience were much more happy with it. We started with the regular “Lucette Visits Céline in Prison” which I really enjoyed playing because (a) I was playing Jessica’s electric piano with lovely weighted keys and (b) I could watch the rain fall on the greenhouse-like roof from where I was sitting. Then we played “Polyxo’s Ghosts”, which we hadn’t performed since June 2007. Next I had to negotiate my way across the small stage towards my guitar to perform “Section 20”. By the time that was finished I was bored with myself, so luckily it was time for Anne Gunn to join us to sing. “All You Can Do Is Love”, last performed in December 2006, has now been transformed into a dynamically-arranged duet. Anne Gunn also sang backing vocals on a resurrected “Come Find Me” (last performed March 2005), the synth now replaced by metallophones with an old moog effects unit. We segued then into a “power pop” instrumental, actually two segments of an unfinished song that were re-worked for the occasion.
I’ve blogged about all the Dacianos shows this year, one way or another: