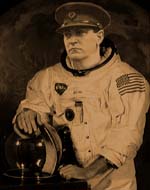 Blather received this week a smattering of emails – actually we exaggerate, it was just the one – which accused us of undue sarcasm and a careless flexibility with ‘the facts’. To assure the readership that we would never stoop to such heights, what follows is perhaps a Real and Factual Account of A Possibly Fictional Hypothesis.

Much ado has been made about the great 120m stainless steel spike which is soon to adorn the central island of Dublin’s O’Connell St., but little has been made of its importance as a monument to the golden (or iron pyrite) age of Irish space travel. In the beginning, there was the 205ft (62.5m) great granite Wellington obelisk in the Phoenix Park – not a monument to rubberised footwear, as some folk are wont to think, but built as transportation for the reluctant Dubliner who favoured that infamous boot, the 1st Duke of Wellington (a.k.a. Arthur Wellesley, 1769-1852), when fears of a post-Napoleonic Interplanetary War were at their peak.

Unfortunately, though building commenced in 1817, the spacecraft (adorned with battle scenes cast from captured cannon) was not completed until 1861, some nine years after the Duke’s demise. It was then thought too heavy to catapult beyond gravity’s reach.

The next notable entry into the Hibernian Space Race was Michael ‘The Big Fella’ Collins (1890-1922), recently hyper-immortalised by actor Liam Neeson in one of those ‘talkie’ moving pictures by esteemed local director Neil Jordan. Collins was one of the military blackguards (as opposed to the Black and Tans) behind the events leading to the formation of the Irish Free State in 1921. He subsequently served as Commander-in-Chief of the Irish army. Thanks to the negotiations between Eamon De Valera, Harry Boland and NASA, Michael Collins was the first Irishman in space, remaining in lunar orbit while his Apollo 11 colleagues Buzz Aldrin and Neil Armstrong went walkabout on the moon. Some commentators reckon that Collins didn’t survive the impact of the command module into the Pacific Ocean on July 24th 1969, while the majority accept that he met his end in Béal na Bláth (The Mouth of Flowers), near Bandon, West Cork, on August 22nd 1922. Discrepancies between many of the reports lead to suggestions from some quarters that the moon-landings were hoaxed by Sinn Féin – subject matter for a forthcoming tribunal in Dublin Castle.

This age of Irish Astronautism came to an end when Nelson’s Pillar (illuminated by a Professor Gluckman in 1849, when men were men and electricians were professors) met a sticky end in 1966, a tragedy comparable to the 1986 Challenger Shuttle incident. The Pillar’s exit from the centre stage of Dublin’s skyward-looking lifestyle is far from a simple matter however, with various factions vying for and denying the notoriety of having done away with it on the 50th anniversary of the 1916 Rising, when Cork seer, astronaut and soldier Michael Collins performed his extraordinary powers of levitation for a waving and cheering populace outside the General Post Office on O’Connell St, then known as Sackville St.

Of course, not many people know that Collins found plenty of time to frequent O’Heffner and Synge’s *Playboy Club of Western Europe*, a late-night wine bar in the basement of Speranza’s house in Lower Leeson St. It was here in the Playboy Club that Lady Hazel Lavery, Collins’ fiance Kitty Kiernan and a Chinese girl called Chango (clad only in myxomatosis-free bunny-hide, she soon left to inhabit the moon) were introduced to intergalactic society by The O’Heffner.

Today Ireland’s contribution to space exploration is more subtle, with technological involvement in various projects, most notably the European Space Agency and the Dublin Institute for Advanced Studies School of Cosmic Physics. The Institute was once lauded by his holiness Myles na gCopaleen for having proved that there were two St. Patricks and no God.

Chief Bottle Washer at Blather
Writer, photographer, environmental campaigner and "known troublemaker" Dave Walsh is the founder of Blather.net, described both as "possibly the most arrogant and depraved website to be found either side of the majestic Shannon River", and "the nicest website circulating in Ireland". Half Irishman, half-bicycle. He lives in southern Irish city of Barcelona.
previous article
Photographs of the Hellfire Club Tunnels, West Wycombe
next article
Belgium? Damn Lies!