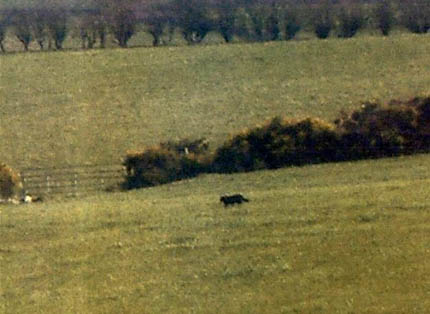 We can’t credit the photo, as the Irish Independent didn’t give one either!
The beast of Letterrkenny! According to today’s Irish Independent, a large black mystery cat has been seen prowling around fields where sheep were recently mauled.
Gardai are currently awaiting tests on droppings found near the animals, to determine what kind of predator is responsible.
The photograph above appeared in the Irish Independent, uncredited, apparently taken by unnamed woman in the Ballylawn area of Manorcunningham, Co Donegal.

It is taken from a distance, so it is impossible to be certain, but the woman who took the picture saw this animal up close in her garden and she knows it wasn’t a dog,” said [Garda/Police] Supt Vincent O’Brien. He confirmed that Gardai had met with the local ISPCA inspector and the county’s wildlife officer as concerns began to grow about the animal.

“We have got dropping samples and they’ve been sent away for analysis, so we’re not exactly sure what kind of animal we’re dealing with. However, the sightings report that it was a large, black, cat-type animal such as a cougar, that moved extremely fast across the fields, and was noticed crawling on its belly,” he said.

Full story in Irish Independent »
We at blather.net have been following the out-of-place animal reports for some years now – there’s been a real spate of big cat sightings in recent years fueling speculation on inadequate animal importation laws, cover-ups of escapes from exotic collections, or animals being dumped by unsavoury circus owners.
Other Irish Big Cat stories from the last few years »
More as it happens…

Chief Bottle Washer at Blather
Writer, photographer, environmental campaigner and "known troublemaker" Dave Walsh is the founder of Blather.net, described both as "possibly the most arrogant and depraved website to be found either side of the majestic Shannon River", and "the nicest website circulating in Ireland". Half Irishman, half-bicycle. He lives in southern Irish city of Barcelona.
previous article
Pygmy hippos photographed in the wild
next article
“Talk about something interesting!”: the evisceration of Sarah Lacy