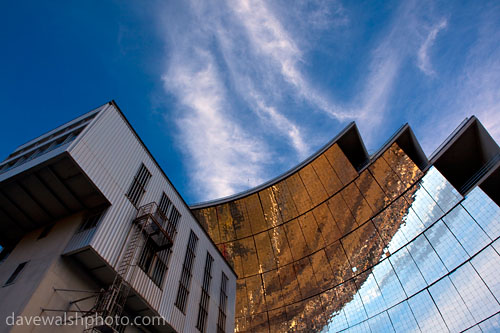 The Four Solaire d’Odeillo giant solar furnace, at the PROMES laboratory at the CNRS facility at Odeillo, France. By focussing intense sunlight through a system mirrors, the Four Solaire can generate the power of 10,000 suns (1000 kilowatts) and reached temperatures of over 3000 degrees Celcius. Most of the research work here concerns the conversion, storage and transportation of energy.

Chief Bottle Washer at Blather
Writer, photographer, environmental campaigner and "known troublemaker" Dave Walsh is the founder of Blather.net, described both as "possibly the most arrogant and depraved website to be found either side of the majestic Shannon River", and "the nicest website circulating in Ireland". Half Irishman, half-bicycle. He lives in southern Irish city of Barcelona.
Tags:solar
previous article
Dolly and Monkey
next article
The Cross at Collioure