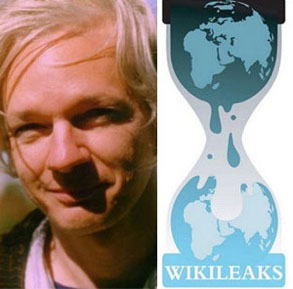 (Photo of Julian Assange of WikiLeaks and its logo: http://edu.npo.eu/news/)

What will be on the video that will be shown in Washington D.C. today?

The website Wikileaks.org is a non-profit organization that publishes countless classified documents, typically ‘from corrupt banks, the US detainee system, the Iraq war, China, the UN’ and it gets away with it by being based in more than one jurisdiction. So the last few years they have been publishing globally, made possible because each country on this planet has different laws about what one can and can’t publish. This is a truly unique situation. It has proven impossible for governments to clamp down on WikiLeaks.

It seems, then, certain governments are thinking of using other methods to prevent material getting onto that site.

‘…the increase in surveillance activities this last month.. [is] excessive,’ says a WikiLeaks press release of 26 March (reproduced in full here), ‘some of the new interest is related to a film exposing a U.S. massacre we will release at the U.S. National Press Club on April 5.’

This is some of the text from the press release, detailing the surveillance:

‘We have discovered half a dozen attempts at covert surveillance in Reykjavik both by native English speakers and Icelanders. On the occasions where these individuals were approached, they ran away. One had marked police equipment and the license plates for another suspicious vehicle track back to the Icelandic private VIP bodyguard firm Terr ( h )… On Thursday March 18, 2010, I took the 2.15 PM flight out of Reykjavik to Copenhagen–on the way to speak at the SKUP investigative journalism conference in Norway. After receiving a tip, we obtained airline records for the flght concerned. Two individuals, recorded as brandishing diplomatic credentials checked in for my flight at 12:03 and 12:06 under the name of “US State Department”. The two are not recorded as having any luggage… On Monday 22, March, at approximately 8.30pm, a WikiLeaks volunteer was detained by Icelandic police for over 20 hours on an insignificant matter. The police then apparently took the opportunity to detain the volunteer over night, without charge–an unusual act in Iceland. The next day, during the course of interrogation, the volunteer was shown covert photos of me outside the Reykjavik restaurant “Icelandic Fish & Chips”, where a WikiLeaks production meeting took place on Wednesday March 17, 2010–the day before individuals operating under the name of the U.S. State Department boarded my flight to Copenhagen. The spied on production meeting used a discreet, closed, backroom. The subect: a concealed, scandalous, U.S. military video showing civilian kills by U.S. pilots. During the interrogation, a specific reference was made by police to the video—which could not have been understood from that day’s exterior surveillance alone.’

The same day as the press release, Washington D.C.-based investigative journalist Wayne Madsen reported that ‘Wikileaks is part of U.S. cyber-warfare operations’. He quoted unnamed ‘Asian Intelligence Sources’, who stated ‘Wikileaks is running a disinformation campaign, crying persecution by U.S. intelligence- when it is U.S. intelligence itself. Its [Wikileaks’] activities in Iceland are totally suspect.’ Madsen also stated that ‘John Young, who runs cryptome.org, a site that publishes a wealth of sensitive and classified information’ claimed WikiLeaks ‘was a CIA front.’ (It is not necessary to sign up to access Madsen’s blog: the full text of Madsen’s blog entry is reproduced here, in Arthur Zbygniew’s ‘International Press Review’ blog).

That’s the kind of thing that gives me mad dreams: two websites, each happening to reveal U.S. classified information, but one says the other is a C.I.A. front.

I can see why an ‘Asian’ intelligence agency might take the view that when WikiLeaks publishes classified Chinese information, it is helping ‘U.S. cyber-warfare’ – but it doesn’t make sense when they’re publishing information damaging to the U.S. Or, perhaps when they publish U.S. ‘leaked documents’ they’re really publishing misinformation or disinformation? Or, what if the C.I.A. is just using Wayne Madsen to make us think just that, thus we won’t give credibility to anything we read on WikiLeaks? Actually, according to WikiLeaks’s twitter feed on 31 March, Wayne Madsen is ‘ex-NSA’ (the U.S. National Security Agency).

I thought of another possiblity when I watched this November 2009 video from Denmark of a talk given by Julian Assange of WikiLeaks (don’t worry about the first seconds if you click that link, the talk is in English): what if WikiLeaks received help from the U.S. to leak stuff about China, and help from the Chinese to leak stuff about the Americans? Assange talks of playing the powers (U.S., China and Russia) off one another (51 minutes 29 secondsinto the talk, in the context of one country revealing another’s gag orders).

But it doesn’t seem likely to me that they’re in bed with any, let alone all, of the world’s intelligence agencies, which would be, after all, potentially lucrative. The website states [no longer on the website but reproduced here] that ‘We have raised just over $370,000 for this year (our yearly budget is around $600,000)’ and names the Associated Press, the Hearst Corporation, the Los Angeles Times, Ralph Nader, the Electronic Frontier Foundation, the ACLU and the Project on Government Oversight (POGO) as some of their supporters.
And is there really any enmity between WikiLeaks and Cryptome? On 24 February, WikiLeaks described Cryptome as ‘a venerable New York based anti-secrecy site that has been publishing since 1999’, while John Young of Cryptome attested to the usefulness and importance of WikiLeaks on the BBC’s Culture Show on 29 January (video).

Meanwhile, today we wait to see what this video is. It is to be shown at the U.S. National Press Club. ‘Speculation about which video we are releasing on Monday is interesting, but we have not yet disclosed which event it pertains to’ tweeted WikiLeaks on 2 April.

Update, night of 5 April: WikiLeaks has released the video, with accompanying text that states it is ‘a classified US military video depicting the indiscriminate slaying of over a dozen people in the Iraqi suburb of New Baghdad — including two Reuters news staff. Reuters has been trying to obtain the video through the Freedom of Information Act, without success since the time of the attack. The video, shot from an Apache helicopter gun-site, clearly shows the unprovoked slaying of a wounded Reuters employee and his rescuers. Two young children involved in the rescue were also seriously wounded. For further information please visit the special project website www.collateralmurder.com‘ – and that’s where you can watch or download the video. There are also transcripts of the radio communication in the video, in five languages.

Warning: Disturbing scenes of being killed by helicopter gunships

Update: For clarity, I should point out one thing about today’s Guardian article about Wikileaks and the ‘collateral murder’ video. The article refers to a Pentagon report on WikiLeaks that was itself leaked a month ago. Sayeth the Guardian: ‘The Pentagon report, reflecting the depth of paranoia about where Wikileaks is obtaining its material, speculates that the CIA may be responsible’ – this is not accurate. I’ve read the report, which is entitled ‘Wikileaks.org–An Online Reference to Foreign Intelligence Services, Insurgents, or Terrorist Groups?’, and it only states that there have been allegations (in the blogosphere) that WikiLeaks is a front for the C.I.A. The report does not lend any credibility to these allegations at all, so it is not right to even call it a speculation. In the above Blather article I’ve linked to Wayne Madsen’s Wikileaks-C.I.A. conspiracy theory but I am not convinced by it. The Guardian writer may have only meant INDIVIDUALS in the C.I.A. leaking stuff, because the report certainly shows concern that there are individuals in various organizations a-leaking, as implied in this phrase on page 3 of the report: ‘moles within DoD or elsewhere in the U.S. government’.

14 April 2010, Two Members of Bravo Company 2-16 from the WikiLeaks Video Speak Out against the War.

19 June 2010, ‘The strange and consequential case of Bradley Manning, Adrian Lamo and WikiLeaks’.

16 July 2010, Why WikiLeaks is right about journalism.