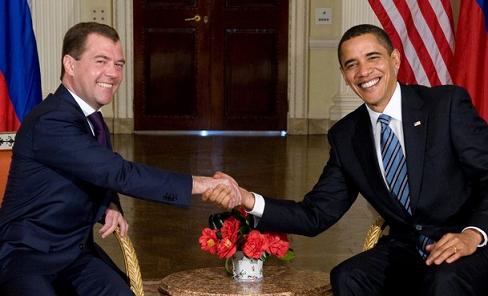 (picture from this source)

Yesterday in Prague, the U.S. President Barack Obama and the President of the Russian Federation, Dmitry Medvedev, signed START, the Strategic Arms Reduction Treaty, which limits the number of deployed strategic nuclear warheads to 1,550 each. Sounds great, unless you realize what the figure of 1,550 actually means. Our ignorance of the meaning of numbers of deployed strategic nuclear warheads allows politicians to get away with making worthy speeches and nice fluffy agreements without actually changing anything.

Although no-one could criticize both sides for sitting down together with some flowers on the table, wagging those chins and shaking those hands and reducing the amount of deployed strategic nuclear warheads from about 2,126 American and 2,600 Russian to 1,550 each over the next seven years, this is far from being a ‘giant step‘, or even a ‘step’. A nuclear doomsday scenario, wiping out all advanced life on Earth, remains possible. Not only the amount of American and Russian nuclear warheads, but their nuclear weapons policies (or ‘postures’) do not alter the road map to Armageddon. The new START treaty, in terms of the survival of the human species, is flippant and meaningless, and I will explain why.

(As I don’t have access to any Russian documents, I will ‘examine’ nuclear weapons policy from the American side. I suspect the Russians provide a perfect mirror image of the Americans on this issue, but here in the Blather Bunker Complex beneath an unnamed mountain somewhere undiscovered in the southern hemisphere, we would like it to be known that if it so happened that one of our readers fluent in Russian with access to all the right documents came forward, we’d probably publish their ‘analysis’.)

1. Deployed strategic nuclear warheads: what do the numbers mean?

If both sides remain true to their word, in seven years, each will have 1,550 deployed strategic nuclear warheads. I have to explain what this figure of 1,550 means in real terms.
Daniel Ellsberg, the famous Pentagon whistleblower, has written a memoir of his ‘research and consulting for the Departments of Defense and State and the White House on issues of nuclear command and control, nuclear war planning and nuclear crises’.

Writing this memoir in 2009, he noted that ‘…hemispheric and possibly global clouds of smoke and soot from the burning cities attacked by U.S. or Russian forces would block out sunlight for a prolonged period, lowering temperature drastically during spring and summer, freezing lakes and rivers and destroying crops worldwide.’ This of course is the ‘nuclear winter’ first calculated by scientists in the 1980s and, as Ellsberg pointed out, recently confirmed, alongside studies that ‘show the possibility of ecological catastrophe from smoke effects on the ozone layer after a very much smaller exchange, such as could occur between India and Pakistan.’

But how many warhead detonations would it take to cause a nuclear winter? Ellsberg: ‘the explosion of 1,000 warheads together by the U.S. and Russia could trigger a full-scale nuclear winter’ (his italics).

Now. Let’s leave aside for the time being the thousands of other nukes the U.S. and Russia have in their stockpiles: Russia’s total inventory is said to be 12,000, America’s 9,400. Let us also leave aside the number of nukes possessed by other nations: UK 185, France 300, China 240, India 60-80, Pakistan 70-90, North Korea 10, Israel 80, and oh, oh, Iran 0 – the five other nations with nukes, Belgium, Germany, the Netherlands, Turkey and Italy, don’t count because their nukes ‘are in the sole possession and under constant and complete custody and control of the United States‘. That leaves us with the U.S. detonating 1,550 and Russia 1,550 on short notice if they go to war, or if one side mistakenly believes it’s being attacked. Now, what is the point of 1,550 warheads each, when detonating 500 each will wipe out the human race? Seven years from now, we will go from a position of being prepared to wipe out the human race five times over, to being prepared to wipe it out ‘only’ three times over!

We know that 500+500 achieves level 2, and above I asked what the point is of 1,550+1,550? There can only be one rational reason for the existence of a number of deployed strategic nuclear warheads above annihilation level 2, and that is to achieve level 3 (possibly even 4). Reducing the number of warheads to anything above 500+499 is meaningless, illogical and, I’m sure any psychiatrist would agree, insane, or by any definition, evil.

The U.S. government has undertaken a ‘Nuclear Posture Review’ in a new 72-page document (download as zip or read as pdf), which, as you would expect, lies about Iran and glibly insults the effectiveness of the IAEA, but it is not all mendacious trash: it’s worth reading to discover what the U.S. nuclear posture actually is. First of all, the U.S. is not giving up its ‘right’ to use nuclear weapons first. Out of all the nuclear powers, only China, India and North Korea pledge not to use nuclear weapons first and to retain them as a deterrent only.

To be willing to use nuclear weapons first in a conflict is inherently dangerous for the world. About the reality of this during Cold War, Daniel Ellsberg has written: ‘…something that was rarely made clear to the American public, that what was to be deterred… was not only nuclear attacks by the Soviets but conventional, non-nuclear Soviet aggression, in Europe in particular… Deterring Soviet non-nuclear aggression in Europe–say, a military occupation of West Berlin–depended ultimately on a presidential commitment to direct, if necessary, a U.S. nuclear first strike on the Soviet Union.’ So, the Soviets did not have to launch a nuclear attack in order for the U.S. to strike, and there was no reason to think a nuclear war wouldn’t have resulted from some other conventional aggressive act on the part of the Soviets. In fact, Ellsberg reveals that the Joint Chiefs of Staff thought that this was the most likely way in which a war would come about! And regardless of how or why the war starts, Apocalypse is inevitable: the fixed military plan is for the same targets ‘to be attacked under all conditions… No forces would deliberately be held in reserve… our overall system for strategic response had the character of a giant thermonuclear mousetrap on a hair trigger. For a wide variety of provocative circumstances–definitely not requiring and most not involving either Soviet-initiated nuclear attacks or imminent expectation of them–it was set inflexibly to annihilate…’
Ellsberg pondered on the risks from ‘…the array of contingencies–accidents, false alarms, outages of communications, Soviet actions misinterpreted by lower commanders, unauthorized action–that might release pent-up forces beyond their control; and on possible developments that could lead them personally to escalate or launch a pre-emptive attack. Eisenhower had chosen to accept these risks. To impose them on humanity, and all other forms of life. Kennedy and Lyndon B. Johnson to my direct knowledge did likewise. So did Richard Nixon. To bring this story up to the present, there is much evidence–and none to the contrary–that the same has been true of every subsequent president.’ Ellsberg wrote this in September 2009. The Cold War is over, the Soviet Union is gone, but the system, the apparatus, the military plan is still in place.

So far so ‘Argh!’ But one positive declaration in the Nuclear Posture Review is that the ‘the United States will not use or threaten to use nuclear weapons against non-nuclear weapon states that are party to the NPT and in compliance with their nuclear non-proliferation obligations’. Yay! However, regarding ‘states that possess nuclear weapons and states not in compliance with their nuclear non-proliferation obligations – there remains a narrow range of contingencies in which U.S. nuclear weapons may still play a role in deterring a conventional or CBW [chemical or biological weapon] attack against the United States or its allies and partners. The United States is therefore not prepared at the present time to adopt a universal policy that the “sole purpose” of U.S. nuclear weapons is to deter nuclear attack on the United States and our allies and partners…’ This, euphemistically, is America granting to itself the ‘right’ to nuke North Korea and Iran if it feels like it.

I’m happy to report here that there is fresh thinking in the American establishment, and it’s not all this political rhetoric about a nuke-free world that no-one takes any real action towards creating. A 16-page article published last month in Strategic Studies Quarterly entitled ‘Remembrance of Things Past – The Enduring Value of Nuclear Weapons‘, by three U.S. Air Force insiders, James Wood Forsyth Jr., B. Chance Saltzman, Colonel, USAF (the ‘chief of the Strategic Plans and Policy Division at Headquarters Air Force‘), and Gary Schaub Jr., contains the magic sentence: ‘In fact, the United States could address military utility concerns with only 311 nuclear weapons in its nuclear force structure while maintaining a stable deterrence.’ Yes, three hundred and eleven.

And they go on to write: ‘Moreover, it does not matter if Russia, who is America’s biggest competitor in this arena, follows suit. The relative advantage the Russians might gain in theory does not exist in reality. Even if one were to assume the worst–a bolt from the blue that took out all of America’s ICBMs [Inter-Continental Ballistic Missiles]–the Russians would leave their cities at risk and therefore remain deterred from undertaking the first move.’

They then raise three arguments against this, and answer each in turn.

Argument 1: ‘…a minimum nuclear posture is of little value to the United States because it must maintain a nuclear arsenal large enough to cover all of its contingencies. In other words, while Pakistan has to contend with India, the United States has several potential contenders that, when combined, pose a large challenge.’
Counter-argument: ‘…it ignores the vast conventional superiority of the United States… also… the United States is deterred in most contingencies by China, which has a much smaller force structure. Presumably, if China can deter the United States, small numbers are effective. In fact, arguments for a large force have no meaning…’

Argument 2: ‘…the triad… was the fulcrum of deterrence throughout the Cold War.’
Counter-argument: ‘…the Soviets had no such operational concept. They relied heavily, almost exclusively, on missiles and still managed to deter the United States. If one accepts the basic idea that it is the political value of nuclear weapons that matters, the method of delivery is immaterial.’

Argument 3: ‘…there is concern over organizational competency and professional development. How small can a force become before it no longer resembles a force at all?’
Counter-argument: ‘In some instances, a smaller force can be extremely competent, and increasing its size could lead to its undoing… Sizing of the nuclear force should be based primarily on the requirements for a stable, reliable, nuclear deterrent, with support issues like industrial base support, crew force management, and training only weighing in as secondary considerations.’

So there you have it, a superior nuclear posture. A way to get the numbers below annihilation level 2.

Contact him here.
previous article
Wikileaks: Surveillance, Suspicion and a Mysterious Video
next article
My Midsummer Mashing up the Mystic