This week’s entry is written by blather.net‘s editor Dave
Iâ€™m sitting in the waiting area of Dublin airport’s Pier C, waiting to board a flight to Oslo. It’s a busy Friday afternoon – across the water, in Heathrow and other UK airports, chaos reigns, thanks to the arrests of suspect bombers.
I’m people watching. Today’s game is figuring out who at Gate C44 is Irish, who is Norwegian, and who is neither. Some travellers are obvious Scandinavians – tanned, blonde hair, tall. I mark a few Irish people off my list, smug in my pigeonholing. As I join the queue for the flight, I realise I’ve got it wrong – overhearing some people talking I realise that some of my borderline Nordics are actually Irish, and vice versa. The vikings, after all, did make themselves comfortable in Ireland.

On board the SAS flight, I drift off to sleep somewhere over the Isle of Mull, and wake up again, my nose bent against the perspex window. Below me are fjords and mountains. In the seat ahead of me is a guy who looks like a Norwegian Johnny Vegas.
This isn’t my first trip to Norway, but it is the first time I’ll be socialising here – the prospect is daunting – I’m currently living in a part of the west of Ireland where I have to nail my door shut at night to stop myself from going out. I’m approaching Oslo with a serious sleep deficit.
Some smiling immigration officers, a very quick bag collection and I’m on the high speed train into Oslo. It’s been raining, but the sky is now clear, with the departed sun burning some pink across the evening sky .Whenever there’s a break in the trees, there’s a bucolic view of a silhouetted farmhouse, a light in a window, and a small cloud of mist rising off the lush grass.
Oslo central, and onto the number 13 tram, texting Barry to let him know my position. Minutes later I stumble into Sound of Mu, at Markvien 58, where Barry feeds me a big glass of Hansa beer, which I desperately need. It’s 10pm and I’m ready for bed. Which doesnâ€™t mean I go there.
Showered, fed and recalibrated, we leave Sound of Mu at 1am, and head to Mystisk Sted (â€œMysterious Placeâ€), where Now We’ve Got Members â€“ yes thatâ€™s a bandâ€™s name – are on stage.Great psychededic jazz madness, but I’m a bit too shattered to give it full tribute, and can only entertain the enquiries of friendly people with bland monosyllables. The venue is amazing – this weirdly shaped warehouse – shades of a 70s church, the sound echoes around the distant ceiling, but not unpleasantly. I fold into an armchair. Big mistake. My eyes flood with glue, and the Sandman shoots dope into my brain. I need bed, badly, and finally manage to get some sleep in Barry’s apartment about 4am.
1pm Saturday. Breakfast in the yard, with newspapers from Ireland. We slink off meet friends of Barry’s who are visiting from London, and have lunch. Then we roll back to Grünerløkka and think about dinner. Today is definitely a sleeping, eating, and sitting on one’s arse and talking day.
9pm – we’re back in Mystisk Sted again. Tonight, Center of the Universe and the wonderful Salvatore are playing. Barry is DJing. My camera bag has a special compartment especially designed to hold one litre of Kilbeggan whiskey, mighty useful. Tonight I’ve more energy, I meet lots of fine, fine people, take photographs, surf the edge of tipsiness. Salvatore are a delight – very different to the ambient feel of their records, they’ve gone all instrumental rock. Which is good. The place is flooded with survivors of a big music festival that’s on this weekend. As usually, Iâ€™m people watching. 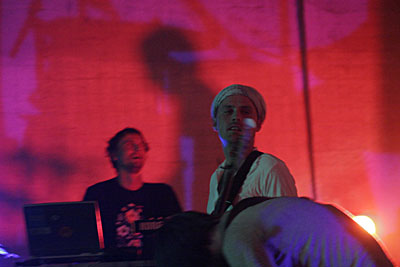 3.30 am. Barry’s winding down the music, all CAN, Cabaret Voltaire, Kraftwerk, even Kate Bush. We stumble out, a load of us, but end up with a skeleton crew – Irish and Norwegians, finally ending up in Barry’s kitchen. No one but me seemed to notice the couple humping away in the park as we walked home, despite the bare legs akimbo, not 10m from where we walked. We welcome in the dawn with the Kilbeggan, and Murphy’s Irish Red beer, which I’ve never seen in Ireland. Somehow, we make it to bed at 8am.
11:30am Sunday. Barry kicks me out of bed. I curse him, plead, negotiate, manage to get coffee into the equation. We’re meeting Alex, a New Yorker who lives in London, and heading to the mausoleum of Emmanuel Vigeland. It’s only open for four hours week, but still, I could have done with more sleep.
Vigeland – whose brother Gustav built the massive Vigeland Park, spent 25 years designing a massive, ornate memoral to himself, tucked away in an affluent suburb of Oslo. It’s a work of beauty and madness – four massive walls covered in masses of frescoes of writhing, naked bodies representing facets of human existence – birth, childhood, motherhood, fatherhood, love, sex, death. It takes 15-20 minutes inside the tall dark room to fully appreciate the work. Genius, crazy, beautiful, but genius anyway. 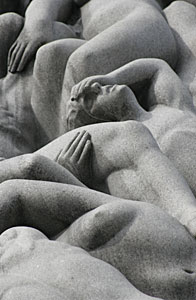 Onto to Vigeland Park, as designed by The Brother. I don’t know what the hell was going on in the Vigeland household at the end of the 19th century, but the two boys grew up hating each other, while creating monumental artworks on virtually the same themes. The Park, which took 20 years to complete, is a major part of the Oslo landscape. Without going into massive detail, it is full of bronze and granite sculptures of nude people – men, women, children, caught up in moments of thought or quiet intimacy, symbolizing all aspects of humanity – but without any sense of the erotic. The whole thing culminates in a rather phallic monolith of naked bodies. It’s a work of beauty, a celebration of humanity. The park is full of Sunday visitors – children are clambering over the massive bodies of embracing lovers.
Later, we wander down to Sound of Mu, where New Zealand musician Greg Malcolm is playing three guitars at once. Beautiful, melancholic stuff. Barry and I are having an early night, which is why he, Alex, a young lady called Ronja and I end up in a pub called Cacadou till about 3am, and then stay up talking till 5am.
I need a holiday.
– Dave “sleepy” Walsh
Read Part II »