This week’s entry is also written by blather.net’s editor Dave, as a followup to last week’s. Where is Barry?
I’m jolted awake by a roaring in my head. I desperately try to take in my surroundings. I appear to be on a passenger aircraft. None of the other passengers look alarmed. I try to act inconspicuous, then realise I’m wearing headphones, and follow the cable into the seat pocket in front of me. I find my Ipod inside. The noise in my head is the intro to Understraum, from the album Straum by Norwegian fiddle player Nils Økland. I must be on the return flight from Norway. I had my Ipod on shuffle, so it’s just coincidence – or synchronicity – that I’m woken up by a Norwegian musician.

I glance across the aisle. The Drunk Irishman is slumped forward, his nose mashed against the folded-up tray table, a collection of crumpled beer cans are on his lap, and hanging out of the seat pocket. A corporate ID card with a Statoil logo is swinging from a cord around his neck. Dangerous, someone could throttle him in his sleep.
The memories start flooding back. When we got on board the SAS Boeing 737, chaos broke out – a party of my compatriots – young, loud and a bit drunk – were scattered around the flight. They were shouting at each other with broad obscenities like they were in crowded bar – not in a packed international flight with kids all around them. Whiskey bottles were passed around. Then the main ringleader, the Drunk Irishman, flopped down in the seat across from me, belched loudly and shouted something like ‘yeronlyabollix’ at one of his mates halfway down the plane. I hid behind my complimentary copy of the International Herald Tribune and controlled delicious homicidal fantasies. The biggest wanker on the flight, or probably in the whole of Norway, and he’s sat beside me. I pray for peace. He passes the whiskey two seat rows forward, and shouts again.
The plane taxis towards the runway. A stewardess stands in front of us, doing the part of the job she must love – demonstrating the safety procedures.
“Whatcherthink?”,shouts Drunk Irishman in his thick Dublin accent. “How many marks outa ten wouldyagiver?”
Her eyes narrow to slits. Maybe she’s thinking about any emergency restraints they have on board.
As soon as we’re in the air, Drunk Irishman shuts up. Maybe it’s the air pressure or altitude, but something seems to subdue him. Perhaps the stewardess spiked his drink. I read, and fall asleep, only to be woken up later by Mister Økland.
My final hours in Oslo had been fairly calm, considering the intensity of the nights before. On Monday afternoon, as the rain eased, I left Barry’s apartment and wandered through the damp streets, down to the harbour. It was too late in the day to head out to Bygdøy, to the Fram, the Kon-Tiki or the Viking Museum. Instead I sat outside a cafe, sheltering from the latest downpour, drinking coffee, and reading Oryx and Crake by Margaret Atwood.
Later, I traipsed through the streets, in a sort of freefall state, not really thinking. I estimate I covered about 4 times the actual distance back to Barry’s place – I like to make a city my own when I visit. In last week’s entry I’d forgotten to mention that I’d been here before – and had mentioned it in blather.net. In August 1998, I was part of an ‘expedition’ – I use the term loosely – concerning an apparently mythical beast that lived in a lake in Telemark. We found the beast, but it appeared to be residing between the ears of a Swedish ‘lake monster hunter’. The joke ran a bit thin, I got sick of the whole caper, and decamped to Oslo. You can read more all about hilarious episode here ».
Back then, I had wandered Oslo, a bit shell shocked, and a bit lost. I had arrived out of the blue, with little preparation, and nowhere to stay. The tourist office sent me off through sheets of rain to a hostel – which turned out to be run by Born Again Christians, and located in a cavernous ex-factory. They, despite what the tourist people had told me, were out of beds, but offered to put me on a mattress next to what looked like a stage. They then told me I’d be forced to arise at some unGodly hour, because they’d be having some kind of prayer service. I threw my rucksack on the damp mattress, packed my valuables into a smaller bag, and wandered out into the rain.
I slouched through the streets all that afternoon, trying to find a place to stay. There was no room at the inn – I got bad news everywhere. Then I spotted a sign hanging from a building: ‘Summerhotel’. I went into the tiled, trim reception, trailing puddles behind me. I got a smile… and a room. Ironically it was some kind of bible school with student accommodation, that turned into a budget tourist hotel in the summer. Saved! 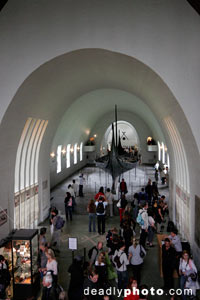 I spent the remaining – hotter and dryer – days wandering about the city, and swimming off the rocks at Bygdøy. Surrounded by mountains, sea and forest, Oslo is very comfortable city – it never feels choked with traffic, or overwhelming. I liked it straight away, but I found it hard to connect with it on a social level – I didn’t know where things were happening.
This trip – August 2005 – was different, because I had a straight connection through Barry. The city makes sense to me now, outside the usual pathways of a tourist. If I pitched up out of the blue again, I’d know where to go to find interesting events, and interesting people.
Tuesday morning – this trip. I fell out of bed early and said goodbye to Barry, still abed in the broad day. Caught a tram downtown, and left my stuff at Central Station before catching the tram to the old Harbour. I love the City Hall in Oslo – a massive redbrick Deco structure that won Oslo’s “Structure of the Century“. After coffee and breakfast, I took the boat to Bygdøy. The day was already running away from me, so I skipped the Fram and Kon-Tiki, and made for the Viking Museum. 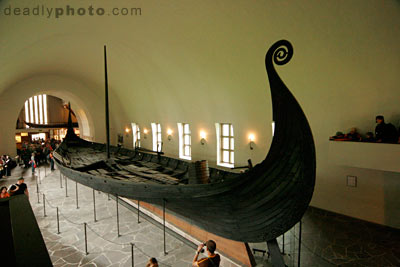 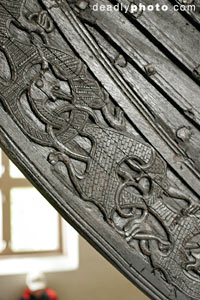 I grew up in Wexford, in the south east of Ireland. Wexford town, or Waes Fjord is one of the many settlements established in Ireland by the Vikings in the 9th century – Dublin being another.. I can’t claim any descendancy for sure from the Norse invaders – but I definitely feel that the Vikings are part of my culture. On both my visits to the Oslo Viking Museum, I’ve had a curious sense of homecoming, that some part of me had a root in the old Norse world. During my 1998 visit, I reflected on how Americans coming to Ireland and other parts of Europe must feel.
The museum Bygdøy keeps it simple – they don’t waste too much time ‘interpreting the past’ – instead they dish up three Viking ships in various states of repair, all found in the Oslo region, along with cases of artifacts. It’s simple, but effective. The place was milling with flocks of tourists – I played the lone freak, patiently waiting till the oblivious left my camera frame.
A quick bus ride back into Oslo had me outside the station – then the 19th minute but very expensive Flytoget train to the airport. Which brings me back to the Statoil party. 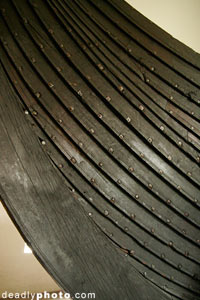 As the plane rolled to a halt outside the terminal building, one of them started a conversation with his pal, the Drunk Irishman. One of their number had, apparently, been left behind. Late getting to the airport, the others had gotten through security and had made for gate 58. The absent one had said “I’ll be about 15 minutes”, and vanished off into the toilets, suffering from a dose of the shits. Now everyone on the plane knew about it. At least he wasn’t there to be embarrassed.
– Dave
Note: Any resemblance to any Drunk Irish People living or undead, any Norwegian oil companies, or Swedish lake monster hunters might be a coincidence, or even a synchronicity.
Read Part 1 »

Chief Bottle Washer at Blather
Writer, photographer, environmental campaigner and "known troublemaker" Dave Walsh is the founder of Blather.net, described both as "possibly the most arrogant and depraved website to be found either side of the majestic Shannon River", and "the nicest website circulating in Ireland". Half Irishman, half-bicycle. He lives in southern Irish city of Barcelona.
previous article
When West Goes North
next article
Love !