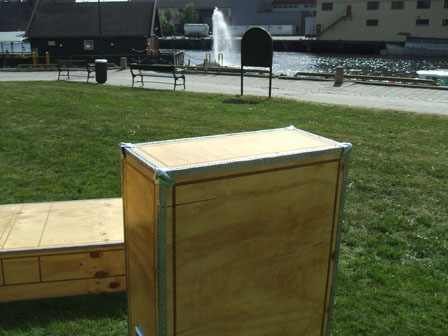 What’s this? It’s the edge of art…
These boxes are artworks by Kristina Müntzig, part of a collection of ‘fake’ furniture placed in a public park in Skien, Telemark, as part of Skien’s public art festival, Tempo. Rather than showing you the art itself, I’m showing you where it meets the harbour. Where it meets ‘reality’! Kristina was only one of about a dozen artists who placed their strange objects around the town.
My own ‘art collective’, Sound of Mu, were involved in our own distortion of Skien’s reality, as we upped sticks and moved there for one day, to host Tempo’s opening event. So into our hired van went musical instruments, a projector, all our microphones and DI boxes, a frying pan, even parts of the floor (each piece of wood having its own story to tell, apparently)… yes, Mu was packed up and driven to Skien on 31 May.

There were at least seventeen of us involved in this operation, and the way we worked together was described as “quiet” and “smooth”. I suppose it’s a special group of people. A local 80s-retro bar was transformed by our many bales of straw and video projector into another realm, and we put on two unusual and entertaining live bands, the sort-of theatre soundtrack music of 3 Øre and the cowboy poetry orchestra Lasso.
I’m not sure I have any funny stories about the event… Our cook set off a fire alarm… A leopard man brought us to a nachspiel where there was a free wheelchair and free alcohol provided… hmm… no it was all fairly smooth. We return to Tempo for another event in October.
I can’t type anymore tonight anyway: I only have one working hand following a bicycle crash on Wednesday night. I’m supposed to be playing guitar at Musikkfest Oslo tomorrow… Will my left hand recover in time? ‘Tune’ in to the next blog entry to find out!
Linkages:

Contact him here.
previous article
I Like What You’ve Done With The Place
next article
Musikkfest Oslo and Other Adventures (with poetic licence)