An Attempt to Take Caravaggio’s ‘The Taking of Christ’

Blather’s Dave Walsh attempts to take The Taking of Christ

BLATHER’S Dave Walsh was yesterday licking his wounds after security personnel ejected him from the National Gallery of Ireland in Merrion Square, Dublin.

Walsh’s The Taking of Caravaggio’s The Taking of Christ
(click image for t-shirt)
A spokesperson for the Gallery said that Walsh was attempting to wrestle Caravaggio’s The Taking of Christ from the wall of the gallery, while making loud comments about ‘blasted picturehooks’ and wearing a the blue jersey of the Italian national cycling team.
According to witnesses, Walsh was dragged by his heels from the room, while shouting ‘Give Italy back to the Italians’ and ‘dia l’Italia di nuovo agli italiani’. He was cheered on by his entourage, which was mostly made up of Italian language students, and his mother, who was visiting from Wexford. 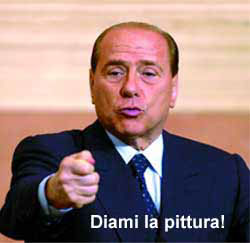 Walsh’s attempts to remove the painting are thought to be connected to the alleged attempts by Italian Prime Minister, Silvio Berlusconi, to repatriate the painting, which depicts Christ’s arrest in the Garden of Gethsemane. Berusconi, however, has denied any such plans, and went on to blame P45, which he described as ‘un web site irlandese molto divertente’.
For more on the Caravaggio debacle, see P45 Comes Clean

Chief Bottle Washer at Blather
Writer, photographer, environmental campaigner and "known troublemaker" Dave Walsh is the founder of Blather.net, described both as "possibly the most arrogant and depraved website to be found either side of the majestic Shannon River", and "the nicest website circulating in Ireland". Half Irishman, half-bicycle. He lives in southern Irish city of Barcelona.
previous article
Daftest site of the week
next article
Mirror, Mirror… Muppa!