Is this a joke? A clown college? Ah, if Oskie Wilde were only alive to see it now…

You can’t make this shit up. Two days ago, a little burd (you know you are) told me about a rather surreal spelling mistake on a Dublin Bus stop in Merrion Square.
In the buttery sunset (this time of year? Just after lunch.), I stole into the southside in black ninja gear and with my camera bag. Across from Wilde’s decadent repose, and a few doors down from the American College, is the School of Cosmic Physics, part of the Dublin Institute for Advanced Studies. Outside is a bus stop.
It looks much like any other bus stop in Dublin. A blue pole, with the Dublin Bus logo on it, and a load of bus numbers and times, as well as the location of the bus stop.
But look a little bit closer… and this bus stop reads:
School of Comic Phisics
I guess the spellchecker was off that day. Didn’t anybody spot the error? Have the dozens of boffins traipsing in and out of the School failed to notice? Or are they too busy working the story into their stand-up routines?
Comments please – I want you to all post your ideas on what kind of surreal things happen at the School of Comic Phisics!
Related story: The Dublin Institute of Advanced Studies, and the research that showed that there is no God and two St. Patricks »
– Dave 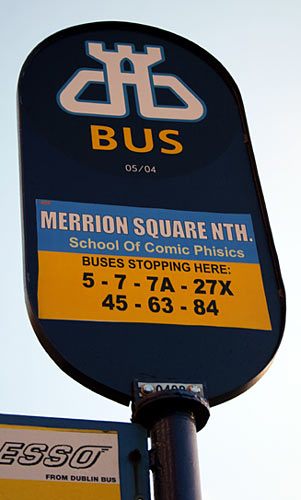 Chief Bottle Washer at Blather
Writer, photographer, environmental campaigner and "known troublemaker" Dave Walsh is the founder of Blather.net, described both as "possibly the most arrogant and depraved website to be found either side of the majestic Shannon River", and "the nicest website circulating in Ireland". Half Irishman, half-bicycle. He lives in southern Irish city of Barcelona.
previous article
Wayne Rooney declared stupidest man on Earth
next article
The Anthropology of Roads