Sweet Jesus but it’s a good day for nonsense news. Spare a moment for Bandit the Owl. A handsome devil he is (I’m sure you’ll agree) but sadly what Bandit make up for in the hottie stakes, he sadly lacks in general avian matters. Or to put it simply, Bandit is a shit flier. 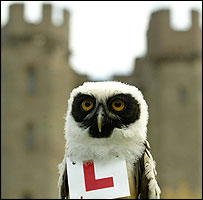 “An owl at a tourist attraction in Warwickshire is such a poor flyer that the hapless creature has been given its own learner plate. The six-month-old spectacled eagle owl, known as Bandit, is one of the most recent additions to Warwick Castle’s Birds of Prey line-up.
I have been training birds for 20 years and I’ve never come across a case like it,” [said Chris O’Donnell.]
“Certainly some birds take longer than others to become accomplished flyers, but Bandit is in a class of his own.”
Have a hoot

Damien DeBarra was born in the late 20th century and grew up in Dublin, Ireland. He now lives in London, England where he shares a house with four laptops, three bikes and a large collection of chairs.
previous article
Fucking fuckers fucked off with road-sign fuckery
next article
Ghost of French dwarf terrorises South Carolina