Sunset above the Beara Peninsula, West Cork, Ireland. Can you believe this is Ireland, in October? Not photoshopped - this was the actual light temperature. Available as a fine art print. Beara Peninsula - Order prints here

A seal with a glint in her eye. A selkie, perhaps? Common seal, Phoca vitulina, near Garinish Island, Glengarrif, Co. Cork, Ireland. There's about 30,000 common seals in Irish waters, and these examples were pretty relaxed with the regular visits of the Garinish "Blue Pool Ferry". Copyright 2011 Dave Walsh All rights reserved - please contact about usage possibilities. Get high resolution common seal photographs

Red Deer stag and harem, Cervus elaphus, in Killarney National Park, Kerry, Ireland, during the annual rutting season. Native to Ireland since the last ice age, the red deer population dwindled to around 60 at the turn of the 20th century, but thanks to protection and management now number in the hundreds. During the rutting season, the stags gather around 5 hinds into a harem, and give out a loud, deep roar to challenge or ward off other males. Inexplicably, the red deer hinds are still hunted in Ireland, although it's illegal to hunt the stags in Kerry.

Beautiful Elafonisi, or Elofonissi beach in southwestern Crete, at sunset. One of the most famous Greek beaches, its turquoise blue waters and white sand attract many tourists during the summer season.

Archaeological remains of ancient Greek city of Falasarna or Phalasarna, near Kissmos Kastelli in Crete, Greece which dates to between the 3rd and 4th century BC. Apparently damaged by an earthquake in 365 AD, it was the harbour for nearby the nearby stronghold of Polyrrhenia. The ruins are open for the public to wander around and are near the beautiful Falassarna beach

Beautiful Falassarna Beach, Crete. Tucked away from most of the tourist traffic, Falasarna is regarded as one of the most beautiful beaches in the Cretan northwest, near Kissamos Kastelli. > iframe {position: absolute;top: 0;left: 0;} _psEmbed("https://davewalshphoto.photoshelter.com");

The ancient Hellenic city of Polyrinia, Crete. The place name means "many sheep" and it was the most fortified city in ancient Crete 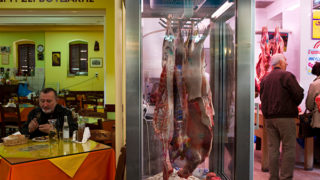