‘If Christ Came Again He Would Die in a Car Crash’ – J.G. Ballard

[This material was recovered by Blatherskites Greg Barrett and Dave (daev) Walsh, allegedly originated on the hard disk of a nomadic laptop, which apparently once belonged to a security agency of note. No members of royalty were injured in the making of this publication.]

The following report details a preliminary investigation into the Archaeology of bisociative coincidence. It outlines a methodology for the recovery of subconscious effects within particular contemporary scenarios. Such Events incur a generic and socially constructed formula known throughout the modern world as “accidental”.

“The arrangement of physical objects and temporal sequences that precede an accident must be seen to be purely coincidental: they cannot have been willed.” [1]

Abiding by this definition, the accident is analogous to the psychological effect of what the psychologist Carl Gustav Jung termed the bisociative coincidence. Each thread of a bisociative coincidence can be traced back according to the linear causality of their respective autonomous paths. However, no individual element can be said to have a causal relationship to another prior to their convergence; the moment of luminosity.

“The significance of these coincidences, that is, the special quality of meaning that makes them not simply unrelated events – is in no way derived from the background factors that can be traced in terms of causality.” [2]

Thus an oblique formula of objective chance aligns the object within the environment by which it presents itself. At the crux of an individual’s subjective purpose and the objective chance of their environment, we have the collision of multiple and autonomous causal series. These series provide the facility for divination; such that the intention which initiates a trajectory is subordinate to the synergy which these coinciding components “inadvertently” provide.

The sequence of events by which the luminosity came into being is oblivious to its effect: the chains of cause and effect are reconfigured at the point of perception, so that the original cause is recast according to its effects.

Abiding by the methodology of The Dogma, the scope of Forensic Parapsychology has been extended by allies of This Organisation to include the examination of traces which sit beyond the archaic phenomenology of cause and effect which stifles conventional Archaeology.

Spaces inevitably manifest a bed of signs as a direct result of their inhabitation, a source of knowledge derived from the continuous processes of life which traverse that space. As we will see, this bed consists of multiple strata; traces that are psychological and physical, deliberate and unintended.

The trace that concerns us is an index of a process which offers a portal to the anterior action of the space which provides it. However most spaces provide for the intersection of multiple trajectories of fate.
Within the context of this maelstrom of activity, space is revealed as psychologically contested. At certain moments, trajectories tangential in source and intention affect each other through the synergy of their co-presence. The spaces in which they present themselves act as a tableaux of indexes, traces of intention and inadvertence.

It is by this methodology that The Participant reveals significant repercussive manifestations of The Event in defiance of the conventional temporal inertia of The Setting.

Research in this area is ongoing, recent field experiments conducted at Pont de l’Alma, Paris have revealed some significant results. 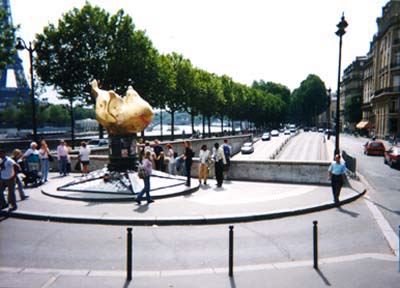 The first picture describes The Setting; located on the south bank of the river Seine about half a mile north of the Eiffel tower. The gold sculpture is the Flame de Liberte; a replica of the Statue of Liberty’s flame which was given to the French government by the U.S. as an object of cultural exchange. 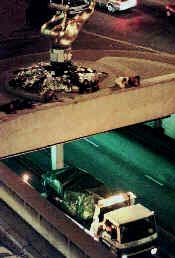 This original significance was usurped however, in the hours following the death of the Princess of Wales. She died from injuries sustained in a car crash which occurred in the tunnel directly beneath this monument. As of that moment it became a focus for the thousands of mourners who adopted it as an ad hoc shrine. With no other official monument to replace it to date, it still stands as the Princess’s principle memorial.

00:24 hours August 31st 1997: The Princess of Wales, Emad Al Fayed, their bodyguard Trevor Reese Jones and their drunk driver Henri Paul were travelling in a Mercedes S-280 from the Ritz hotel at Place Vendome. They were heading West through Pont de l’Alma tunnel when their car went out of control and struck one of the support pillars. The Princess later died from multiple injuries. 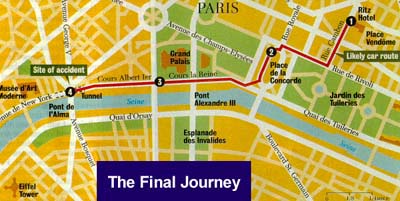 This space has recently been the site of field experiments into objective alignments of bisociative allegories pertaining to The Event.

This information could not have been prised free of the context in which it lay without the assistance of our compliant Participant.

Mr. R___ (hitherto referred to as ‘The Participant’) is pictured below in the casual sports-gear-ensemble typical of a New Yorker on vacation. A proud father of six and a traditional family man, he has been Brooklyn’s second largest Dry Cleaning chemicals distributor for the last thirty odd years. A self made man, he would like to think he knows his business inside out.

What he is less aware of, however, is his ability to manifest latent subconscious perceptions from his surroundings. This field experiment would not have been possible without the patient assistance and understanding of his loving wife M__ who, along with her daughters, helped us to gain the trust of her husband and tap into the wealth of his particular gift.

Abiding by our standard methodology we conducted an oblique interview with The Participant prior to the field experiment, to determine to what extent he was aware of the details of The Event under investigation. This interview would also reveal his personal conception of the subconscious percepts with which he is gifted.

His knowledge of the The Event was entirely sourced from the mainstream press, and his conception of his gift was sceptical/dismissive according to the tenets of common sense associated with the rationalist Lifeworld model.

His spouse has been aware of these skills since the birth of their first child and shows much compassion in these ‘special situations’ whenever they arise.

If anything she is perhaps guilty of pro-active sheltering, suppressing his realisation and prolonging the buttress of denial by having helped ‘explain away’ incidents by which he had been troubled in the past.

In order to withhold our agenda, and thus safeguarding the integrity of the experiment, we arranged, by way of a fictitious competition, for The Participant and his family to win a vacation to Paris for a weekend. Our team were sporting the style and manner appropriate for this charade. 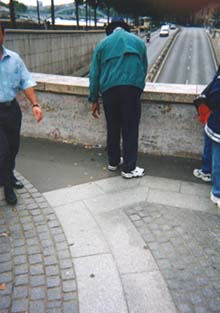 When first introduced into The Setting, The Participant quickly adopted a formula response, shaking his head slowly, emitting tuts and sighs as he moved around the monument reading its ‘personal’ inscriptions. At the north eastern side of the monument he pauses, raises his gaze toward the tunnel exit and begins to nod. He moves toward the tunnel wall and begins to tap at the ground with his cane. We allow a few more seconds to pass to be sure of the significance of his actions, then give the signal to The Spouse. She quickly moves in and begins the sensitive process of comforting her husband, who at this point is both blissfully unaware of his actions and devastatingly overcome with emotion. M___ prises the objects out of The Participant’s hands and gives them to us. She then leads her husband away from the scene, and the curious stares of the other tourists. 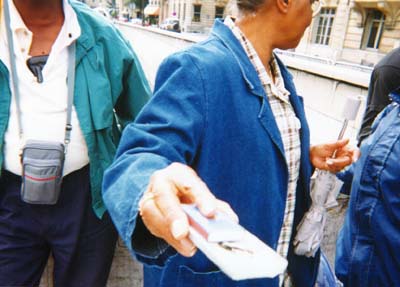 Our team immediately evacuated the scene for further investigation: replacing the artifacts exactly as The Participant had found them.

As we can see the two objects (hitherto referred to as o-1 and o-2 respectively) are :


a grey cardboard presentation box, and

However, these were selected within the context of other items of detritus of this environment. Among them were; cigarette butts, a spent match, a candy wrapper, a section of the back of an Elastoplast and, a sous-verre or beer-mat (hitherto referred to as o-3). 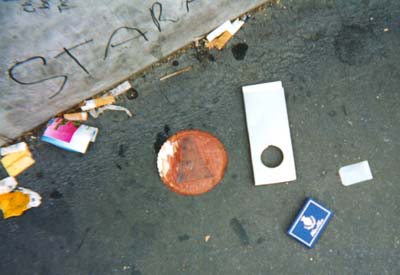 Following preliminary investigations, objects o-1, o-2, and o-3, were deemed of particular significance and considered to have been the ‘operative-set’ for The Participant within this space: “such that they compose an allegorical representation of The Event: a pastiche of the objective trajectories which has caused them to coincide: that is by the same proairetic code as The Event.”

It was subsequently discovered that: 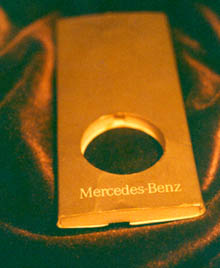 Pertaining to o-1: the grey box was a presentation box for a key ring bearing the Mercedes Benz logo. It is sourced at all of the 11 Mercedes dealerships in the City; the P.A.S (Proximate Available Source) being at Place de La Republic, 2.5 kilometres away. Contents: empty. 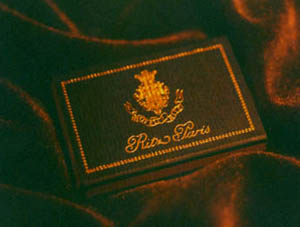 Pertaining to o-2: the match box is sourced only at the P.A.S: The Ritz Hotel at Place Vendome 1.2 kilometres away. Contents: empty. 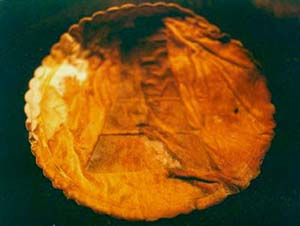 Pertaining to o-3: the sous-verre bears the iconography of the Eiffel Tower, visible from the site, and is sourced from twenty six individual cafes, bars and restaurants around the City. The P.A.S. being at an establishment off Place Vendome, 1.2 kilometres away. The predominant red staining on was probably due to it having been used to mop a nose bleed on site 40 minutes previous to the experiment. This person may be of benefit to our investigations.

An investigation of associated mantic symbols affected by the event.

Aria Records Inc.: The company were about to release a recording by Artiste Kylie Minogue entitled: Accidental Princess. Following the event, Ms. Minogue re-named the release in order to avoid associated semiotic malaise.
Ms. Minogue may be of benefit to our investigations.

Mercedes Benz Global Marketing: Inquiries into the alteration of their advertising portfolio during the period of media furore surrounding the crash. The fact that the make and model of their car was being included in press reports amongst the other details of the crash:

According to Mr. T__, for weeks after the crash, memos circulated within the company outlining the details for a complete withdrawal of advertisements for Mercedes Benz products, excluding only those in specialist journals.

Several members of the customer services department were distressed enough to leave work due to the dozens of phone calls they were receiving, the general content of which being; quote,”…you bastards, you murdered our Princess!”

The official line from the head of the department, Mr. K__ is that Mercedes had pulled their advertising as “a mark of respect; as did many companies advertising various brands all over Europe” – dubious.

Ms. A__ representing B.M.W : “No, it didn’t affect us because she was actually killed in a Mercedes and we advertise B.M.W… I know that Mercedes pulled their campaign for a couple of months, but it didn’t apply to us at all.”

Pictures from the Crash

Chief Bottle Washer at Blather
Writer, photographer, environmental campaigner and "known troublemaker" Dave Walsh is the founder of Blather.net, described both as "possibly the most arrogant and depraved website to be found either side of the majestic Shannon River", and "the nicest website circulating in Ireland". Half Irishman, half-bicycle. He lives in southern Irish city of Barcelona.
previous article
Out of the Marvellous – Black Masses, Lord Dunsany and Falling Fish
next article
The Event: Princess Diana’s Death