Opening a Can of Worms on Europe’s Frontiers 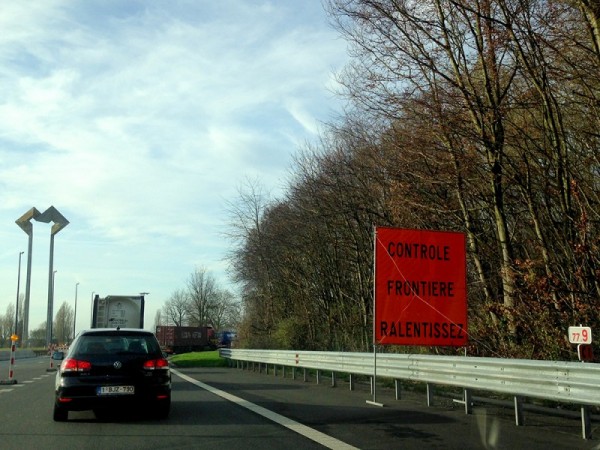 I don’t drive very often, but when I do, I often end up thinking about the absurdity of steaming along in immaculately streamlined rockets that are powered by exploding long dead and decomposed organic matter, and spewing out the aftermath into the atmosphere. When I have to sit in traffic, I find myself staring at other more patient, gridlocked drivers with a desire stick my head out the window and shout “do you really think this is NORMAL?”

And so I found myself in a long stuttering tailback of trucks and cars waiting to cross into France from Belgium. Since the November 2015 attacks in Paris, border checks had been stepped up between the neighbours, causing some commentators to upgrade their lamentation of the slow death of the Schengen Area that had started with the refugee crisis.

Passing the dishevelled customs posts, between Mons and Valenciennes is normally a quick and anticlimatic affair. Like most Schengen area border crossings, there’s a sign encircled by EU stars and “France” or “Belgique”, followed by a text message to your phone warning you the roaming charges (these too shall soon pass).

I had crossed this border a week earlier, heading north. On approaching Belgium, the few cars and trucks on the road were funnelled into a road looping around the back of the old customs building. There was checkpoint to speak of, just where a gaggle of disinterested policemen and soldiers who barely glanced at the drivers navigating the gargantuan potholes that marked entry onto Belgian territory.

Going back into France wouldn’t be like this, of course. No disrespect to the Belgians, but the French are serious, they’re going to check everything. The road surface will be immaculate. They will ask complicated questions. That’s what this big delay is all about. I switched the engine off, dug out my passport and thought about what the Douanes or the police might ask me.

Bonjour Monsieur, what do you have in the coffre?

I have a piano, several lampshades and a box of garden worms.

Monsieur, seriously, what do you have in your car?

Really, I have a piano, lampshades and worms.

Look, there are hordes of radicalised Daesh terrorists roaming around Belgium and France and they are a threat to us all. Please don’t joke.

A box of worms? Passport? Mais oui, the Monsieur is Irish. Never take the Irish literally. He is of course speaking about a metaphorical box of worms.

No, no, it’s not a metaphor – I really do have a box of worms. If you like I can open it for you.

The two policemen freeze, their hands on their sidearms.

Are you threatening us, Monsieur? Please step slowly out of the car, with your hands above your head.

I picture myself sitting alone in a windowless interrogation room, coated in peeling brown gloss, somewhere in the innards of a Valenciennes police station. Outside in the carpark, the chemical warfare HAZMAT team have packed up and driven back to Paris, disappointed. Chain-smoking detectives in leather jackets and tinted glasses are stumbling through Gainsbourg’s Je t’aime on the piano. Uniformed cops are telling jokes and sharing gardening tips with the worms (the worms are thrilled, it’s their first trip to France). I can’t imagine what’s happened to the lampshades. A magistrate is sitting somewhere, explaining to others in the room how he’s going to have to make an example of l’Irlandais.

The car in front of me starts rolling, so I restart the engine. The frontier approaches. I can see minivan parked in the distance. The bastards must be searching cars. Shit. The car stereo is playing the 1994 Fatima Mansions’ album Lost in the Former West. Its title and many of its songs tell of a world changed by the end of the Cold War, with Brunceling’s Song depicting former CIA chief James Jesus Angleton selling sunlamps door to door, because “in this so-called peacetime, even spooks fight to stay alive”.

The album’s songs have been in my head all week, Cathal Coughlan’s lyrics proving strangely relevant to the new era of European and world history we are all currently creating. The song I’m listening as the French border approaches is Belong Nowhere, which now seems oddly prescient. It seems to be about the breakup of Yugoslavia, but it could be about any of the not-far-from-the-Mediterranean crises occurring today. Coughlan’s reference to drones means something far different today, of course.

Belong nowhere. Here I am, an Irishman, based in Belgium, driving into France. Where do I belong? In Ireland? While I’m culturally Irish, after years on the move, I feel a citizen of a world that that instead me to subscribe to a narrow national limit. I belong nowhere, and everywhere. This fanciful thought is a luxury for me, of course; thousands, millions, are looking for any peaceful land that will accept them. Belong Nowhere.

Borders fascinate me. The natural liminal zones between ocean and land, where the forests end, and the tundras or deserts begin. The supernatural and mythological kinds, like the river Styx, places on earth where it said that only a thin veil hangs between this world and some other, like that of the gentry or faeries. The ancient landscapes in Ireland, like Sligo and Limerick’s Lough Gur. The stairs and landing at the Palmer household in David Lynch and Mark Frost’s Twin Peaks, the precursor for the circle of 12 sycamore trees where Agent Cooper enters the Black Lodge, accompanied by the haunting singing of Little Jimmy Scott.

Then there’s the grim, grey human versions, like this one, a arbitrary invisible line cutting through flat, sodden fields. I remember crossing the border into Northern Ireland as a 10-year old in my parents car, fascinated by the gaunt security infrastructure and unsmiling RUC men, checking out car for weapons. Crossing back later, Irish customs questioned my father after they found an accordion in the boot. They thought he had bought it in the north and were trying to get him to pay import duty, but managed to convince that he had bought it in the Republic (which was true). I remember waking up on an overnight train from Frankfurt to Prague in the mid-90s, as it stopped for a passport check and refreshments at some ungodly hour of the morning on the Czech border. I had no secrets worth selling, but I felt like a character of a Graham Greene or John Le Carre novel.

But here I am, like my father before me, about to cross a grim, grey frontier with a musical instrument in the boot that I will struggle to explain. At least he could play the accordion. I hit pause on the Fatima Mansions, lest it enrage the lawmen.

As the line of cars picks up pace, I clutch my passport between my knees and hope for the best. The French side road is no better than the Belgian aide. I detour a pothole that may be UNESCO-protected WWI crater, a good match for the one on the Belgian side. The open mini-van is actually a police car. One policeman and two soldiers are standing by it, looking generally towards the line of traffic, but not doing much else. The line of cars files past, then accelerates as each machine faces the open road. I wonder if I am the only traveller who has found this a odd and pointless. I want to wind down the window and shout into the wind “I suppose you all think that was NORMAL!”. Instead, I ask the worms, the piano and the lampshades “all right in the back there lads?”, put the Fatima Mansions back on and enter the land of Liberté, égalité et fraternité.

Chief Bottle Washer at Blather
Writer, photographer, environmental campaigner and "known troublemaker" Dave Walsh is the founder of Blather.net, described both as "possibly the most arrogant and depraved website to be found either side of the majestic Shannon River", and "the nicest website circulating in Ireland". Half Irishman, half-bicycle. He lives in southern Irish city of Barcelona.
previous article
Cop21: The Poor Mouth in Paris, starring Enda Kenny
next article
Crossing Europe’s Frontiers #2: Pointless Pyrenean Traffic Jams