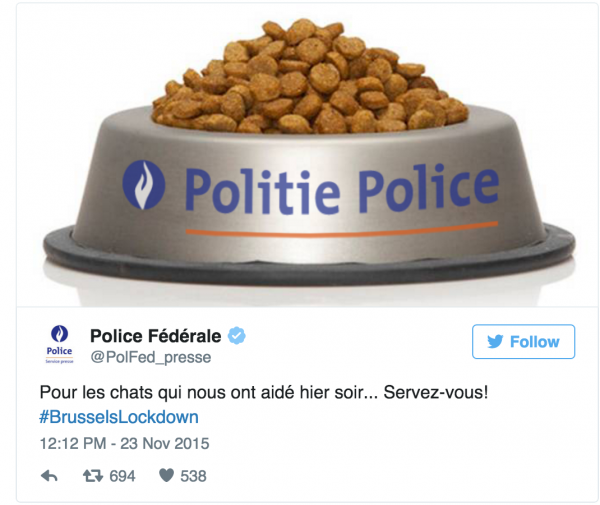 That was a weird weekend. Brussels, the world’s 2nd most cosmopolitan city, with 62% of its population born elsewhere, has been a standstill for three days. The metro is still not running. Music venues, bars, cinemas, suburban swimming pools, all closed. Parents have kept their kids home, waiting for news on whether schools will reopen tomorrow. Soldiers and armed, balaclava wearing police patrol empty streets downtown, and in some of the suburbs.

On our roof terrace on Sunday afternoon, the cold November air smelled of barbecues and baking apple pies. There’s rumours of a baby-boom in nine months time. Across our street, more lights are on in apartments than seems usual. In one apartment, where the television alternates between cartoons or shoot-em-up games non-stop from 6am till midnight, I can spy revolving news stories showing b-roll of Brussels streets, cut with press conferences with the Belgian Prime Minister, Charles Michel, and mugshots of Europe’s most wanted man, Salah Abdeslam.

Abdeslam is the man that allegedly fled back to Belgium, having apparently decided not, or failed to, ignite his suicide vest during last weekend’s Paris atrocities. Belgian authorities are looking for not only Abdeslam and an accomplice, but are looking to stop what might be a larger group of home-grown terrorists from carrying out an attack. In response, they have raised the “terror level” to four – meaning an attack is imminent, and that people should avoid large congretations.

It’s a curious situation; city life is on pause. With the streets empty, shops and schools closed, there seems little incentive for a suicide bomber to end it all, if it means taking nobody with him. Maybe a determined, more patient bomber might wait till everything returns to normal. But who can rationalise what is going on in the mind of someone intent on blowing themselves, and anyone around them, to smithereens? The government, for its part, is buying time without putting lives at risk, but not without impact to businesses and the freedom to go about one’s business.

Last night, as multiple police raids rolled out across the city, the only streaming TV footage showed Italian Sky TV journalists stamping their feet and police officers jumping up and down to keep some circulation rolling. Eventually, Sky too went offline, joining national and international media in heeding the government’s request to quit broadcasting the whereabouts of police activities. This was intended to starve the terrorists of information, and to give the police and army a greater chance of surprising their prey. The plea went beyond the media – the public too, were asked to stay silent about police operations, particularly on Twitter.

The response was remarkable, and humorous. This being Belgium, Twitter did not simply go quiet. It went surreal, with the #Bruxelles and #BruxellesLockdown hashtags becoming a torrent of cat photographs, interspersed with occasional images of Brussels martial arts legend Jan Claude Vandamme. And as the world capital of bande dessinée franco-belge and the home of Magritte surrealism, people were unearthing the ultimate Belgian symbol of wryness, Le Chat, drawn by Philippe Geluck, showing our hero in Kamikaze mode. By Monday morning, news of the cat meme was reported worldwide. The Federal Police responded by posting photoshopped images of cat food, as a thank you. 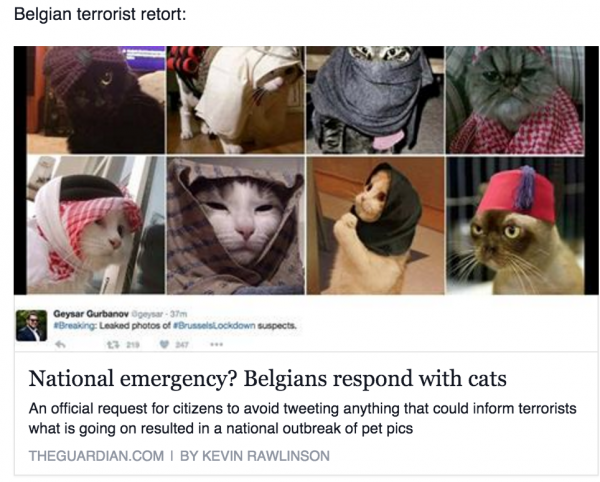 Monday morning also brought news of some 22 raids on Sunday evening, in Brussels and Charleroi, wand with 16 arrests, no weapons found. By Monday afternoon, another five suspects had been arrested, after raids in Brussels and Liege and load of cash and the National Security Council were meeting to decide next steps.

We haven’t really left our quartier since Friday, which bridges the line between urban and suburban, mainly because haven’t really needed to. We’re not venturing downtown, at least not for now, certainly not with our five-month old son. I realise that this kind of tension haunts many cities in, for example the middle east, and people go about their work as normal, despite the risks. But for western Europe, the threat of suicide bombers is a new concept, and the Belgian authorities seem determined to nip it in the bud. If they can’t, it’s not clear how long a city of more than 1 million people can remain in so-called lockdown mode, waiting for a handful of individuals to present themselves, or to be unearthed by the police. 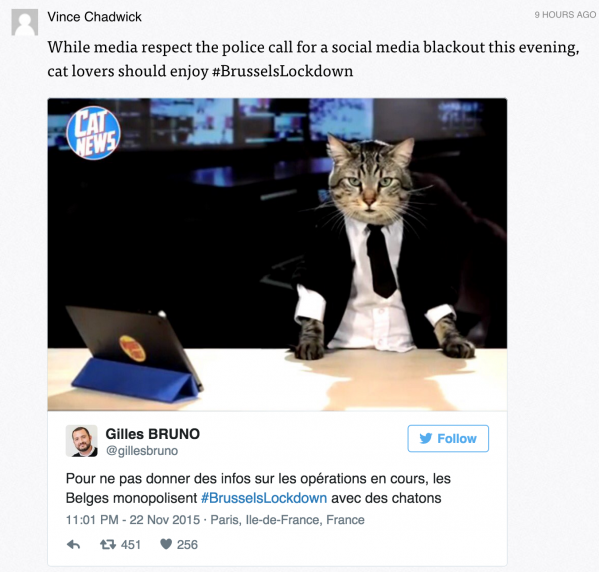 Chief Bottle Washer at Blather
Writer, photographer, environmental campaigner and "known troublemaker" Dave Walsh is the founder of Blather.net, described both as "possibly the most arrogant and depraved website to be found either side of the majestic Shannon River", and "the nicest website circulating in Ireland". Half Irishman, half-bicycle. He lives in southern Irish city of Barcelona.
previous article
Dublin: All Stops to the Point
next article
Cop21: The Poor Mouth in Paris, starring Enda Kenny