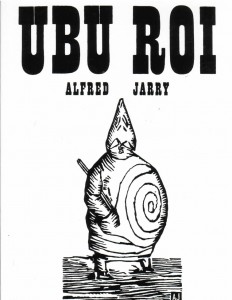 And so Pere Ubu issued the very word that the finally threw the audience at the Theatre de l’Oeuvre into a frothing frenzy, during the 1896 staging of Alfred Jarry’s (1873-1907) infamous Ubu Roi. The Parisians didn’t take well to the absurd affront delivered upon them by the bold 23 year-old playwright. This broadside of “Shite!” successfully outraged the bourgeois, and shot Jarry to strange stardom aboard a wave of scandal.

Jarry’s influence has been considerable. While he himself owes much to Rabelais, movements such as Dadaism, Surrealism, Futurism, Expressionism Cubism, Theatre of the Absurd – all owe debts to his works. Picasso, Flann O’Brien, The Marx Brothers, the Goons, Mad magazine, Robert Anton Wilson, Monty Python and their spawn were all influenced by Jarry, whether they knew it or not . . .

The Ubu plays came as a cultural shock to the smug chattering classes. He created a world where no meant yes, where parody became reality, and where artistically, no tribute was paid to the history of theatre. In Jarry’s theatre, the characters are shockingly dehumanised until they are mere marionettes, language is twisted, and nothing is preached. The theatre-goer is left to their own devices when it comes to understanding the ‘message of the plays’, or discerning whether or not one even exists. Ubu, Jarry’s main character, had appeared before, in the playwright’s schooldays, when he and his friends constructed elaborate puppet shows, parodying their teachers. It is only here that we can draw the ancient tradition which Jarry mined – the grotesque humour of a beachside Punch and Judy show.

So, who was this Pere Ubu? Some may know of a music group of the same moniker – but in King Ubu, Pa Ubu is an oafish, idiotic dictator, who kills and invades for no sound reason. His nagging spouse Ma Ubu, accompanies hims as he and his army of Barmpots assassinate Good King Wenceslas of Baloney. One of the King’s sons, Billikins, escapes, and receives "a great big sword" to fit the Ubu terror. Ubu, enjoying his new found Kingdom, soon lets it get to his head, and starts ‘debraining’ any dissenters, and demanding triple tax. His citizens side with Billikins, while Ubu’s lieutenant, the obscene Dogpile, joins up with Tsar Alexis of All the Russkies to restore Billikins. Meanwhile, Ma Ubu elopes with a handsome Balonian soldier, along with the state treasures. Pa Ubu ends up living in a cave with two cronies, Wallop and McClub, before teaming up with Ma again, and they all head for Engelland.

I never promised it would make sense – and this was the madness
presented to the good people of Paris in 1896.

The other two plays – Cuckold Ubu and Slave Ubu – are no more sensible. The former is incomplete in its modern form, but is replete with an Egyptian statue of Memnon, which Ma Ubu cuckolds Pa Ubu for. It’s a difficult play to describe, and is darker and weirder than King Ubu. In true Punch and Judy style, a crocodile turns to chase off some of the characters. In Slave Ubu, Pa Ubu tires of tyranny, and becomes a slave instead. To cut a long story short, they end up in a jail, ready to be sold to Sultan Suleiman of Turkishland. The jail is so plush that the Populace try to break in, in order to become convicts. They become Turkish galley-slaves, and all row off into the sunset, and all live happily ever after.

Other well-known examples of Jarry’s works include the wonderful The Passion Considered As An Uphill Bicycle Race, a short prose piece, with Barabbas scratched from the starting board, Pilate starts the race, and St. Matthew is the sports commentator. Jesus gets a good start, but a bed of thorns puncture his front tire, and ends up carrying his cross-shaped frame up the hill, while the two other competitors (‘as thick as thieves’) escape . . . and so on. Other notable publications include the futuristic and macabre Supermale (which involves a 10,000 mile race between a locomotive and a five-man bicycle), and the posthumously published Exploits & Opinions of Dr. Faustroll, Pataphysician, an absurd novel about Dr. Faustroll, who with his baboon and summons-server (who was trying to evict him at the start of the book) travel across strange lands in their sieve in search of ‘Pataphysical solutions – ‘Pataphysics being "the science of imaginary solutions, which symbolically attributes the properties of objects, described by their virtuality, to their lineaments." On his way to eternity, Faustroll proves that "God equals the tangential point between zero and infinity."

And what of the man, Jarry? Under five feet tall, he habitually dressed in black cycle-racing clothing, grooming himself like Mephisto in miniature. A serious eccentrics he took very seriously the art of taking nothing seriously, and referred to himself in the third person. As if this wasn’t enough, he referred to his bicycle as "that which rolls," and the fish which he caught in the Seine as "that which swims." He ate his meals in reverse, desert first.

Often he would be seen, tearing in and out of Parisian bars and houses astride his bicycle, swilling absinthe and pointing his two pistols at anyone who questioned him. He often alternated between meticulous cleanliness and not washing.

He wrote: "Anti-alcoholics are unfortunates in the grip of water, that terrible poison, so solvent and corrosive that out of all substances, it has been chosen for washing and scourings, and a drop of water, added to a clear liquid like absinthe, muddies it". And so he drank his absinthe straight . . . and when he couldn’t afford that, he took ether.

He fell ill, mainly from his absinthe drinking and ether sniffing, at the age of 34, and had himself photographed as a corpse, so that he could send postcards to his friends. Eventually, he was overcome by tubercular meningitis, and lapsed into a coma, waking momentarily before death to call, not for a priest or absinthe, but for a toothpick . . .

This collection includes Jarry’s Antliaclasts, How to Construct a Time Machine and Hommages Posthumes.

The Passion Considered As An Uphill Bicycle Race
Read it in parallel with J.G. Ballard’s story The Assassination of John Fitzgerald Kennedy Considered as a Downhill Motor Race.

Why Anti-matter Matters
This essay by Douglas Cruickshank contends that Jarry disoverd anti-matter.

Ubu’s Almanac: Alfred Jarry and the Graphic Arts
Exactly what it says it is!

Alfred Jarry: A Cyclist on the Wild Side
An essay on Jarry’s obsession with bicycles.

Chief Bottle Washer at Blather
Writer, photographer, environmental campaigner and "known troublemaker" Dave Walsh is the founder of Blather.net, described both as "possibly the most arrogant and depraved website to be found either side of the majestic Shannon River", and "the nicest website circulating in Ireland". Half Irishman, half-bicycle. He lives in southern Irish city of Barcelona.
previous article
The Confabulous Mind – An investigator of the paranormal searches out human memory
next article
Savage Controversies – Irish Lake Monsters