Maybe It’s Because I’m Not A Londoner 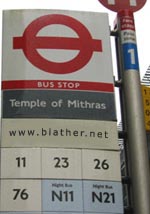 Back in London… A city I can appreciate on many levels, but can never quite warm to. My last visit had been in 1999 or 2000, probably for a Fortean Times UnConvention. My lightning-raid incursions tend to happen over weekends of busy intensity, so I’m perhaps unqualified to judge the place. Besides, the denizens seem to be managing quite well with out me. St. Paul’s Cathedral
THE AFTERMATH
The next morning, we dragged ourselves into the City, to meet a crowd of Megalithomanics on the steps of St. Pauls Cathedral. Saturday’s speaker Rob Stephenson led us off into a sneak preview of the London Before London exhibition in the City of London Museum. Workmen were still finishing the lighting as we passed by cases of lion, mammoth and hippo bones, ancient tools and human remains and other artefacts leading up to Roman times. 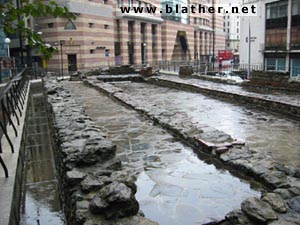 The Temple of Mithras
A quick dash around some of the rest of the museum took in artefacts from the Temple of Mithras, which was a temple dedicated to the Persian Sun God, discovered in the Walbrook area of the City, after World War II. 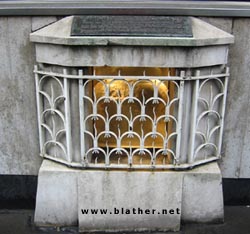 The London Stone
After we left the museum, Rob Stephenson led us, in pissing rain, around some interesting sites – the Temple of Mithras itself, in its new location, Sir Christopher Wren’s St. Stephen Walbrook – the temple’s original location…the London Stone, stuck in the wall of a financial company’s office, through the ruins of the Church of St. Mary, Aldermanbury, also designed by Wren in 1667, destroyed in the Blitz in 1940, and subsequently rebuilt in Fulton, Missouri… we saw churches by Hawksmoor and more by Wren, and the Guildhall, built more or less on top of the original Roman amphitheatre. 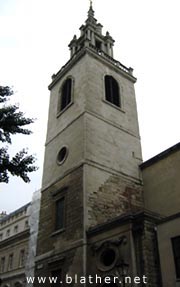 Chief Bottle Washer at Blather
Writer, photographer, environmental campaigner and "known troublemaker" Dave Walsh is the founder of Blather.net, described both as "possibly the most arrogant and depraved website to be found either side of the majestic Shannon River", and "the nicest website circulating in Ireland". Half Irishman, half-bicycle. He lives in southern Irish city of Barcelona.
previous article
How I Failed The Turing Test Without Even Being There
next article
Megalithomania: Maybe It’s Because I’m Not A Londoner