The masters of metal-machine music come to Ireland… 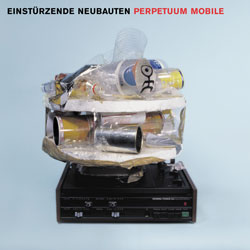 I came across their music through an act of faith. I was in 1993 that I read about Neubauten, and thought – ‘This is the band for me’. I went into the long vanished Freak Out records in Dublin and got myself a copy of Strategies Against Architecture II – a compilation of their work. It was almost unlistenable, but was impulsive listening, especially the fraught Ich Bin’s (It’s Me), and Z.N.S. (DNA). And then there was their curious rendition of Lee Hazelwood & Nancy Sinatra’s Sand, complete with howling and mechanical groans.
This is not to say that Neubauten’s music is ugly, by any means. There’s a reaching, a yearning in their music – Sehnsucht. It seems to be music was born of a need to transcend the ugliness, the faded glories of Berlin, a city torn apart by World War II and the Cold War. Neubauten’s visceral metamorphosis has been going on since 1980… they’re no longer spiky haired heroin-taking codpiece wearing steampunks. These days they’ve filled out a little, wear sharp, moody suits and sport a natty line in hats. Their last studio album was called Silence is Sexy…
You’d be forgiven for thinking that they’d sold out or stopped making noise, and opted for middle-aged opulence. Nonsense. Neubauten are no so compromising. Instead, they’ve honed their sound from the angry metallic percussion of the early years, into a more coherent tense beauty, laden with melodies that sound like they’ve been lovingly filed down and polished in a fitters workshop. Their drumkits came from necessity – Unruh had sold his drumkit, and couldn’t afford another so he built one from springs. The bass drum is a suspended coil spring, struck laterally. Snare drums sounds come from large sheet metal. Some pictures of current instrumentation, including they ‘aircake’ – made from styrofoam and Pepsi bottles can be found here »
They’s still fronted by Blixa Bargeld – also known as that lean, gaunt guitarist from Nick Cave &amp The Bad Seeds, thought after years of dividing his time between both acts, he’s forsaken Cave’s outfit for his beloved Neubauten. Typically, Blixa’s voice is unconventional, and his lyrical style more like poetry (scroll down for Blume lyrics).
Other founder members in the band are Alexander Hacke and RU Unruh while Rudi Moser and Joachim Arbeit are relative newcomers. Former members include FM Einheit and Mark Chung.
Following years of hassle with record companies (but finally finding a home at Mute, the EN boys took an unusual move – they’ve started a supporters website. For a nominal fee, the site gives access to the webcam coverage of the recording process, and the fans actually have real input into the creation process. In a recent interview in The Wired, Bargeld says that while it was a difficult leap of faith, it’s paid off, with some music – on the verge of being discarded – championed by fans, and making it onto their most recent album Perpetuum Mobile. Supporters also get one-off CDs and DVDs from the band, and even get to meet up with the band while on tour.
I’m a signed up fan, and I feel as though I’ve become a patron of Einstürzende Neubauten, rather than someone who just buys their records. I doubt that EN are about to start artistically pandering to the whims of their fanbase, but they do seem to have discovered a love of collaboration.
Buy Perpetuum Mobile on Amazon.co.uk
Buy Perpetuum Mobile on Amazon.com
Visit www.neubauten.org – official website
Blume
(English version, performed with Anita Lane)
Chrysantemum
For you I am a chrysantemum
Supernova, urgent star
Astera Compositae
For you I’ll be a dandelion
a thousand flowerettes in the sky
Or just a drop in the ocean
If you know my name
don’t speak it out
it holds a power – as before
Liliacea
A lily of the valley
a flower of saron
Helianthus annus
For you I even be a sunflower
Do you hear my enlightening laughter?
another reason to cut off an ear
You know my name, do you not?
don’t say it
For it’s a sacred, immovable – frozen
Rosa, Anemone et Nymphea alba
I’ll even be a waterlily,
a marygold, a rose
or a little thistle
Euphorbiaa
blue dahlia, a black tulip
that’s where opinions differ
the scholars disagree
My name, should you know it
remains unspeakable
and it’s spoken – malediction

Chief Bottle Washer at Blather
Writer, photographer, environmental campaigner and "known troublemaker" Dave Walsh is the founder of Blather.net, described both as "possibly the most arrogant and depraved website to be found either side of the majestic Shannon River", and "the nicest website circulating in Ireland". Half Irishman, half-bicycle. He lives in southern Irish city of Barcelona.
previous article
The Giant Irish Man of Louth and Meath
next article
Ireland and Genetic Modification of Food