NOTE: BLATHER.NET DOES NOT ISSUE NSK PASSPORTS
So stop asking us!
‘Art is fanaticism that demands diplomacy…’ 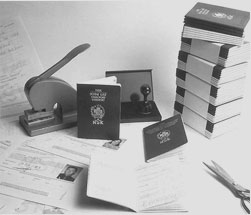 Happened along to Dublin’s Project Theatre last night, and finally (after a decade of procrastination) obtained my NSK (Neue Slowenische Kunst) Passport. I had my photo taken, joined the passport office queue, and chatted to other new wannabe citizens. I waited as an NSK official typed up my passport, pasted my photo in, stamped it, signed my letter of welcome to NSK State, and then shook my hand. I am now a citizen of the non-geographic global State in Time. You have been warned. 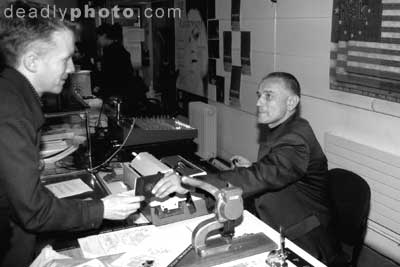 NSK may be ‘merely’ an ‘art project’ – visiting Dublin as part of a week long Slovenian takeover of Dublin, but its important enough to warrant the attendance of the Slovenian ambassador. NSK has gone mainstream. I was talking to one businessman (suit) and all, who had come across NSK while working with a bank in Slovenia. There was an old lady (bearing a remarkable resemblance to the Queen of England) who was signing up for hers. The passport office is open for the next few days. Dublin has not year earned a full-time NSK embassy or consulate. Let’s lobby a TD.
The NSK Passport, looks, and reads like a real passport. But its attitude is subversive, born of a dry, wry humour. Cynics may argue that €24 for a useless passport is a rip-off. I’d argue that I’ve purchased a very funny, very necessary piece of art. NSK is art on a grand, transnational scale.
Founded in the Slovenian Republic of the Federal Socialist Republic of Yugoslavia in 1984, NSK’s strategy ‘has been one of over-identification with the implicit properties of state ideology‘. 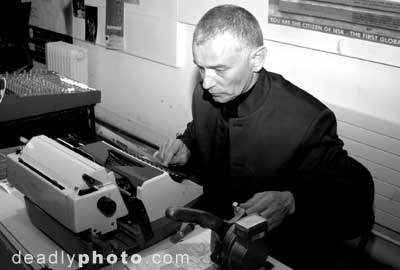 With the week that’s in it – the EU summit in Dublin, and a celebration for the accession of 10 new member states, the deadpan totalitarian humour of NSK has never been more relevant.
From the documentation:
Anybody can become an NSK Passport holder and acquire the status of an NSK citizen. The NSK state denies in its fundamental acts the categories of (limited) territory, the principle of national borders, and advocates the law of transnationality.
The passport is a document of a subversive nature and unique value. A holder fills in data and collects in it stamps, signatures, etc., at NSK events and similar campaigns. In this sense, the applicability of the passport is unlimited and subject to the responsibility of its holder.
NOTE: BLATHER.NET DOES NOT ISSUE NSK PASSPORTS
So stop asking us!
Obtain an NSK Passport »
More on NSK State in Dublin »
A Thesis on NSK – More total than totalitarianism: The strategy of Neue Slowenische Kunst »

Chief Bottle Washer at Blather
Writer, photographer, environmental campaigner and "known troublemaker" Dave Walsh is the founder of Blather.net, described both as "possibly the most arrogant and depraved website to be found either side of the majestic Shannon River", and "the nicest website circulating in Ireland". Half Irishman, half-bicycle. He lives in southern Irish city of Barcelona.
previous article
Carrowkeel Megalithic Tombs – Sligo
next article
Screaming for Perspective