Better late than never: The Blather guide to surviving Christmas….

Most people associate Christmas with the pleasure of gift giving, or the enjoyable tradition of drinking oneself stupid. But this time of celebration is also associated with other far weirder customs. If you wish to avoid luck in the coming year, you would do well to be cautious.
For example, ivy and holly, seemingly innocent decorations that we place in our homes, have superstitions surrounding them. Ivy has something of a mixed reputation in both Ireland and England. A plant of ill omen, it should not be used alone or overused when decorating the house for Christmas. Although regarded as bad luck, it was also thought of as a plant of divination.
In Cornwall there is a saying;” Anyone who wishes to dream of the devil; should pin four ivy-leaves to the corner of his pillow”.
As for holly, it can be taken as good luck when a sprig of Christmas holly is thrown on the fire and makes a crackling sound. But if it burns with a dull flame and makes no sound, there could be a death in the family within the year. Such beliefs were widespread in nineteenth and twentieth century Britain and Ireland.
Nowadays, to avoid bad luck, we know to take the decorations down by the twelfth day of Christmas. In the early twentieth century decorations were left up till Candlemas day-2nd February. A quote from Worcestershire explains; “It is unlucky to keep Christmas holly about the house after Candlemas Day, as the Evil One will then come himself and pull it down”.
In Suffolk in 1864 it is recorded; “If every scrap of Christmas decoration is not removed from the church before Candlemas-day there will be a death within a year in the family occupying the pew where a leaf or berry is left.”
Holly itself is a tree with lots of customs. For instance, like a faery tree, they should not be cut down. In mid twentieth century Devon this was the case; “About fifteen years ago two holly trees were cut down in the parish. Locals protested violently, saying this would produce poltergeist havoc.”
The innocent mince pie also has strange superstitions attached, such as this one from late nineteenth and twentieth century England; “Mince pies, too, have their own magic; if you eat twelve of them, from twelve separate friends, during the twelve days of Christmas, you are promised a lucky twelve months to follow.” This may be an excuse for gluttony. It is also reportedly bad luck to eat mince pies outside of the twelve days of Christmas.
Another strange belief is associated with Christmas Eve. “At midnight on Christmas Eve cattle are supposed to kneel in their stalls in adoration of the Saviour. It is said that anyone who enters the stable to test this, will be struck dead.” This is from 1927 England.
My mother grew up in rural east Galway in the 1950s. She has a different memory of Christmas Eve; “Whenever my father or farmers in the locality went to check on their animals, at the time of night when Jesus was born, the animals would be kneeling down.”
She remembers another belief associated with New Year; “Every 6th of January the family, including extended family would gather to say the rosary. Before we started it was traditional to light little candles. We had a board, and we’d each stick a candle to the board. Everyone had their own colour. The candles would be lighting all through the rosary, and as they were burning, the children would build up the candle grease to made their candle last, as the tradition was that whosever’s candle died first, they would be the first to die.”
Another important date until recently was Holy Innocents Day- 28th of December. This is the day dedicated to the first-born children slaughtered by Herod (Matthew 2:1-18). This day is also known as Childermas. It was known as a ‘dismal’ day, a day that was unlucky. Despite falling within the twelve days of Christmas it was known be a heavy and subdued day. In the Aran Islands fishermen refused to leave the harbour to fish. If anything was started on this day, it was sure to go wrong. Washing yourself or clothes was avoided as this could cause a death in the family.
Melton says in 1620, observing Cornish superstitions of that day; “That it is not good to put on a new sute, pare ones nailes, or begin any thing on a Childermas day.” Donkeys fared a little better from this day of hardship. They were given a day of rest and an extra feed, in thanks for helping Mary’s flight to safety in Egypt. If not observed the ubiquitous bad luck will be sure to follow.
Another animal to do well at Christmas is the fly. Try not to harass or kill them and they will bring you good luck. Even if they are licking your dinner.
A final word concerns gifts; even this harmless custom could incur doom. “A small Herefordshire farmer sometime since made lamentations, that a pair of new shoes had been unwittingly received into his house on Christmas morning, and said it was ‘bad job’ for he ‘lost a sight of cattle that year’.
If there is anything to be learned, it is to be a little cautious around Christmas, as the year ahead, indeed life could depend on it.
– Sue 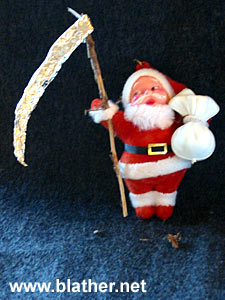 Sue Walsh was partly brought up by cats in her native Wexford, where along with her brother, she scoured the river for junk. At the age of three her mother caught her carrying kittens in her mouth. She lived in the woods for a while, then the lure of the stage was too much, and she ran away with a theatre company. This enabled her to keep her multiple personalities happy, and so she is continuing to act whenever the opportunity arises. When not on stage or the silver screen, Sue can be found scribbling away and conducting séances. She is still scouring the river, hoping to find treasure in amongst the junk, just like Suzanne in the song...
previous article
Planes, Leprechauns and Amputations
next article
O Cruel Death! At the Hill of Slane