Medieval Stave Churches, so called because they are constructed with wooden staves, could once be found in various parts of Europe, but they have survived only in Norway. There are 28 here and I visited two of them.
Most of the stave churches were built between the 1130s and 1350. The Black Death spread in Norway from 1349 and construction of all kinds soon ceased.

Borgund Stave Church (pictured here and below) in Sogn was constructed in the 1180s and is the least altered of all the churches. There are additions like the 1654 altarpiece depicting the crucifixion, but the Medieval stone altar is still intact. The stave churches became altered as Christianity evolved. For example, in Heddal Stave Church ( in Telemark, constructed in 1147 and the largest of its kind) the figurative mural on the walls from Catholic times had a simple pattern painted over it when the Lutheran era came.
I visited these churches with people from different countries and of different faiths, and I believe there were different psychological reactions. I think that for Lutherans a church is its people, and the church building is just a building. The congregation could conceivably meet anywhere. The building is perceived as a faith-inspired artwork, only as sacred as, say, a piece of religious music by Bach. Lutheranism and other Protestant traditions generally identify with the original Christians, who met in barns or houses, and the buildings themselves had no special significance.
I think that for Catholics the church building is a sacred place, and they are generally less comfortable with tourists clambering around the churchyard or taking photographs of the altar. This may have to do with the doctrine of transubstantiation. For Catholics, there is an intense aura around the tabernacle where the host is stored, an intense feeling that God is present in the church building.
This sense of a holy place is also found in paganism, with places like Stonehenge and Newgrange being perceived as having a special aura, and they are often referred to as places of power. And it is often said that churches were built on old pagan sites, implying that there was always something special about these spots of land.
Once this perception is instilled, it is very difficult to shake off. If you are standing in a place that feels like a holy place, it is because you feel the place is affecting you, and it does not feel that you are projecting something onto the place, even if that is the case. A waft of incense and you stop in your tracks.
So for some people, the stave churches are just buildings, and for others, they are something else entirely. 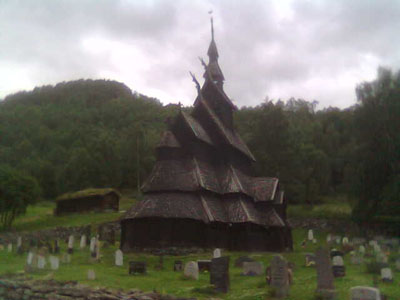