Despite the prolific downing of bottles, jeroboams and even buckets of alcoholic liquid, no-one approached the toilets; the tension ran so high in that room that we just sweated it out. The question on our minds was: who would win the prestigious Blather Award for 2006? The competition was fierce; everyone had a chance this year.

Rotund, bespectacled Seamus ‘Elephant’ Crosbie, Managing Director of Blather Soft Drinks and Web System Solutions (a subdivision of Killkid Aircraft Weapons Solutions Inc., registered in Fort Worth, Texas) approached the podium with the glittering golden envelope and read out the nominations.
DeBarra’s head fell into his hands, gripping his full hair with his nervous fingers. A well-remembered Republic of Ireland penalty shoot-out came to mind. Did we have a Dave O’Leary on our team? Unshaven, influenza-eyed Kavanagh turned a bleary, wistful eye to the windows, wishing he was far away from this swanky hotel (the Paris Hilton Underwear Continental), sad that he was not born in another era, another epoch, on another planet, when he would not have to live with such tremendous anxiety. Goatee-bearded Walsh leaned back in his chair, dressed in coal black, half-full cognac glass in hand, turning what have often been described as his “cold, staring, murderous eyes” towards ‘Elephant’ Crosbie, while his sister gently caressed a certain voodoo plaything under the table, a ghost of a cruel smile dancing upon her inscrutable lips.
‘Elephant’ cleared his throat. “And the nominations for the prestigious Blather Award are…
Oooh, first up is Capitalism Magazine, because ‘individual rights are the moral basis of society’ and we all agree with that! Mmm, money is goood!!! You can stuff my trousers with cash, anyhow! Scrumptious! I can go lower!
This year we were particularly charmed by the online prayer against Satan and his Rebellious Angels, a necessary addition to the world wide web. Prince of Darkness! We drive you from us!!! Ow! Get down on your knees and puh-ray, baby!
Speaking of getting oh-so-squeaky clean, we just couldn’t live without How To Clean Anything Dot Com, it’s just sooo handy daaahhling! At least for my cleaning staff, ha ha ha!
And oooh, our fourth nominee is something incomprehensible called Blather.net but it wins because it pays our wages and because it’s the only blog that got nominated. The others are all boring old fashioned website thingies and this is 2006 so, like, WISE UP, mademoiselle!!!”
The prestigious Blather Award in the form of a Golden Calf was lifted aloft by a troop of pensioners dressed in sackcloth, but the arrogant Blather team didn’t bother walking over to the stage to collect it.
“So we win again. But why was ‘Elephant’ so camp, decadent and Nero-esque this year in his vocal delivery?” Kavanagh asked.
“Last year’s angry-white-male-body-builder approach didn’t go down too well with the TV networks,” Walsh answered, sagely.
“Where’s the bar?” asked DeBarra, regaining the moment.
A particular voodoo item dropped down softly into a lady’s bag, unscathed for another year. 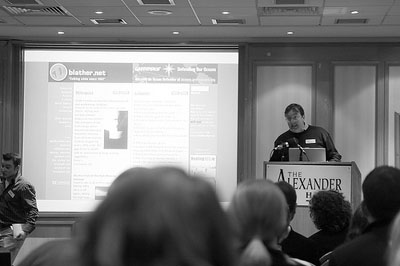 Photograph borrowed from here »
Earlier Zeitgeist thread: Irish Blog Awards
Blather.net was on the shortlist for the Irish blog awards

The disembodied collective editorial voice of the only really nice website in Ireland.
Tags:"Featured Articles"
previous article
Irish Priests rocked by allegations of not molesting children
next article
So, your man is going to the World Cup, eh?