In which the Count O’Blather tells of his great friendship with the late Fr Pat Noise, who died in suspicious circumstances when his carriage plunged into the Liffey in 1919.

As I have just returned from the tropics, it has taken me some time to re-engage with the political hoo-hahs and media blurtings for which the fair land of Ireland is well known. However, I do see it as my duty to stay abreast of issues that concern the plain people of Dublin, like lap-dancing clubs and ‘morr-guages’.
On my arrival back into Ireland (via, of course, the eternal Pigeon House), I was handed a rolled up copy of the Sunday Turbine. Inside, some journalist was wittering on about the ‘sudden’ appearance of a plaque on Carlisle Bridge, dedicated to the demise of a Father Pat Noise, who was an advisor to the one and only Peader Clancy. Father Noise, as the plaque tells us, died in suspicious circumstances when his coach and four plunged hundreds of feet into the abyssal waters of the River Liffey, on August 10th 1919. Suspicious indeed – his death may has been linked by some to the rise of Cabaret and the signing of the constitution of Germany’s Weimar Republic – which occurred the following day.
As people of my generation can attest, 1919 was a very cold summer – we had none of yer fancy ‘global warming’ back then, I can tell you. The steel-clad wheels of Father Noise’s carriage slipped on some black ice as he rounded the bend from O’Connnell Bridge onto the quays. The holy father was being pursued by some swarthy gentlemen from a certain establishment in Lad Lane at the time, who apparently were aggrieved over Father Noise’s alleged failure to cough up a sum of money equal to the pleasure he had experienced in a nearby salon of discretion. Which is, of course, complete lies – his worship was never shy with flashing a few bob.
The driver of the late Father’s carriage, hellbent on making for the M4 motorway, where he felt he could lose the stingy sods (The Sunday evening traffic would have been coming the other way), was forced to swerve in order to avoid creasing an unmarried gentleman who was loitering on Bachelor’s Walk. The ice (quite thick, even for August) caused the wheels to slide sideways, taking the coach, horses, driver and the late father through a hole in the river ice, and into the swirling torrent of Anna Livia. A passing itinerant veterinary surgeon and swimming champion managed to rescue the four horses. The driver was swept away, atop the carriage, but was later rescued off the coast of South Georgia. Alas, not a trace was found of Father Noise – some speculate that he later reappeared in public life as Oliver St. John Gogarty, who needed to have several versions of himself in order to retain his polymath status.
I hear tell that the young rapscallions running Dublin City Council want to remove the blessed plaque – claiming that it has only been in place since 2004. This is, of course, is balderdash, I was there myself for its installation, during a unseasonally hot December 1920. Based on this claim, the Council plan to replace this splendid memorial to a great friend of the profane, and replace it with a plaque dedicated to a ‘real’ person. Well, I never.
Adding insult to injury, I now hear that some young turks – ‘students’ or somesuch – are claiming responsibility for the creation of the Father Noise memorial – and are touting ‘video’ evidence as proof. Damn, next they’ll claiming that the Padraig Sheehan memorial on Hawkins Street is a hoax! Pater Noster my eye!
– The Count O’Blather
Dublin City Council: Plaque on O’Connell Bridge
Dublin City Council: The Illegal Plaque on O’Connell Bridge
Video footage of the alleged artist
In Memory of Father Noise
Wikipedia: Father Pat Noise
Mystery plaque to be removed from O’Connell Bridge
City planners puzzled by new bronze plaque on bridge
Mystery plaque to be taken down at O’Connell Bridge

© Dave Walsh/blather.net
Get a high resolution printable version of this photo from davewalshphoto.com » 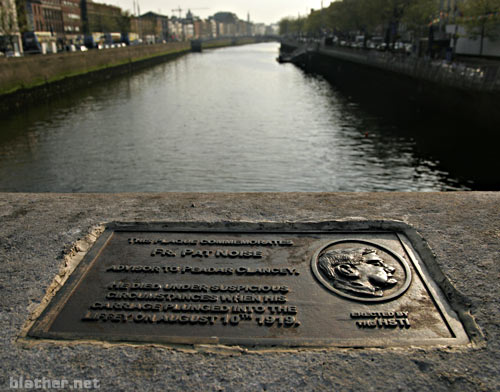 © Dave Walsh/blather.net
Get a high resolution printable version of this photo from davewalshphoto.com »
The Sunday Turbine (07/05/06) article:

The plaque, which even contains a picture alleging to be that of the mysterious religious figure, claims to mark the spot on which Fr Noise died “under suspicious circumstances when his carriage plunged into the Liffey on August 10th, 1919.” The plaque states that Fr Noise was an “adviser to Peader Clancey.”
After being informed by the Sunday Tribune of the plaque’s existence, council officials inspected it on Friday afternoon and hope to identify when and how it was placed into a hole on top of the wall on the bridge. The plaque is located on the Ha’penny Bridge side of O’Connell Bridge, near to the traffic lights on Bachelor’s Walk.
The plaque claims to have been erected by an organisation called “the HSTI”, although the heritage department of the city council said it had never heard of a group by this name.
“Council officials had a look at the plaque (on Friday) but they said they had never seen it before,” said a spokeswoman. “It is certainly very unusual for this to happen.
The council said that it was possible the plaque was erected legitimately a number of years ago, although this would seem most unlikely given that nobody seems to have noticed it until last week.
The rough manner in which the plaque is inserted into the wall would also suggest that it was placed only recently. Although it appears expertly made, it is too small for the hole, which has several rough edges.
Council officials will now attempt to pinpoint the age of the plaque and the historical significance of ‘Fr Pat Noise’ before making a decision on whether or not to remove the memorial.
Found here, on museum of hoaxes »

Blather Note: There already was a recess in the stonework of the bridge, leftover from the ill-fated Millennium Clock that was placed there – so the hoaxers must have had the plaque made to fit. HSTI is an obvious anagram of ‘SHIT’.

“A short distance away from O’Connell Street by the banks of the Liffey lies the site of an ill-fated millennium clock, erected in the mid-1990s to count down the hours, minutes and seconds to the year 2000. The clock, with a green-illuminated digital face, was placed underneath the surface of the river by the bank so that the time shone up through the water. Plans were originally underway to attach a postcard booth that would personally print postcards for tourists, each bearing the exact amount of time left at that moment until the dawn of the new millennium. However, the clock entered a period of chronic ill health: it had to be temporarily removed to allow a rowing-boat race to pass by, and in the months that followed, it had repeated problems with letting in water and failing to display the time correctly. It was removed after a brief period, but not before it had been variously nicknamed the Time in the Slime and Chime in the Slime by the people of Dublin. A rectangular hole left in the side of the bridge was later filled with an unauthorised plaque commemerating a fictitious priest, Father Pat Noise.”

Wiki: Dublin statues and their nicknames »
The Padraig Sheahan Memorial
While this monument marks the site of a local tragedy, the reports from the time signify the provincial and national grief. The singular bravery of the policeman and the dignity of the municipal worker carrying out his job reverberated through the city and country. Sheahan was a native of Glin, Co. Limerick and rather a colossus of a man at 29 years of age, 6’4″, weighing 18 stone. On Saturday, 6 May, 1905, Constable Patrick Sheahan was on duty at O’Connell Bridge, he had volunteered that afternoon to cover for a colleague. The tragic incident which would end his life was not his first act of bravery, he had saved the lives of an elderly couple, both of whom he had carried from a tumbling building in Townsend Street and had wrestled with a runaway bull in nearby Grafton Street. The workman he tried to save at Burgh Quay was already dead at the bottom of the manhole when a newsboy, Christopher Nolan, ran for Sheahan’s help. When he disappeared down the manhole, two other men followed and were also overcome by gas, one was Tom Rochford, a clerk of works with City Corporation. A third man, Kevin Fitzpatrick, a hackney driver, tied a rope around himself and lowered himself down, managing to rescue the unconscious men, but Sheahan and John Fleming were already dead.
The monument bears a rather ironic choice of words:
This memorial Was erected in memory of Patrick Sheahan a constable in the Dublin Metropolitan Police Force who lost his life in the 6th day of March 1905 in a noble and self-sacrificing effort to rescue John Fleming who had in the discharge of his duties descended the main sewer close by this spot and was overcome by sewer gas. It was also intended to commemorate the bravery of a number of other citizens who also descended the sewer to assist in rescuing the beforementioned, thereby risking their lives o save those of their fellow men
Source: Dublin City Council »
Find Father Pat Noises’s memorial on Google Maps »

The disembodied collective editorial voice of the only really nice website in Ireland.
previous article
So, your man is going to the World Cup, eh?
next article
Blather Meets… Noam Chomsky

Last week, on the day Boris Johnson entered Downing Street, the top section of the BBC News website was dedicated almost entirely to stories about the new Prime Minister and his cabinet. But one story from the business section was considered sufficiently important to occupy the top of the front page...
View on Facebook
·Share

California Assemblyman Phil Ting has never been arrested, but he was recently mistaken for a criminal. He's not surprised. Ting (D-San Francisco), who authored a bill to ban facial recognition software from being used on police body cameras, was one of 26 California legislators who was incorrectly m...
View on Facebook
·Share

The Tally Ho talks to Chris Rodley February 22, 2018May 7, 2019 Posted in Media, Podcast, The Tally Ho Podcast, TV. Format Post format: Link2 Comments Welcome to The Tally Ho, a podcast about the classic TV series The Prisoner. In this episode, we talk to documentary filmmaker and writer Chris Rodle...
View on Facebook
·Share