Anyone familiar with the historical and monumental landscape of Ireland should be well aware of the mass proliferation of ‘Holy Wells’. Any self-respecting parish has perhaps half a dozen of these places, some of them are on said to be on the sites of ancient monasteries, and are often named for the Saint said to have founded or lived at the monastery. Others are less obviously historical, but are allegedly endowed with some form of healing powers, and usually named for some saint, whether or not the canonised one even hailed from Ireland at all. Places with water said to have healing powers are not confined to Ireland, one major example being Lourdes in France.

Crossabeg, the Wexford parish that this Blatherskite hails from, lies north of Wexford town, and is surrounded on three sides by the windings of the Slaney estuary. A compact (yet somehow decentralised) parish of circa 1100 people (compared to a rather ramshackle 3300+ on the 1831 census), it’s a pretty interesting place, dotted with Norman castles, semi-demolished estates, old mill houses and Holy wells. And of course, much like any Irish parish, Crossabeg is up to its gills in weird tales.
The tale of St. Maelruan’s Well has been nagging away at me for the last few weeks, ever since I read *Crossabeg – na Crosa Beaga – The Parish and its People* (1998, Volume 1). It contains a chapter, ‘The Holy Wells*, by Anne Foley, which tells of St. Maelruan’s.
St. Maelruan’s Well, with which healing stories are associated, is in Ballynaleck, some 3 miles (4.8km) or so from this writer’s homeplace, where Maelrun, Bishop of Tallaght (Dublin) lived and worked for many years during the 8th century (he died in 787). All well and fine, until we learn that in the 1750s, a ‘carved figure of black oak’, about 28-30 inches (71-76cm) in height was found floating in the well, ‘by persons who were digging for money below a portion of the ruins of the monastery’. The statue was said to have been in reasonably good shape, and partially gilded.
However, as is typical, another version of this story exists. WH Grattan-Flood, in a talk at St. Peter’s College, Wexford in 1902 tells us that:

“In the year 1750 a man who lived in the neighbourhood had a striking dream in which he was urged by some superior spirit to go and explore St. Maelruan’s well in which there was something remarkable concealed.

This dream recurred on three nights. The man visited the well, and in the course of his explorations, he came across a strange looking statue or effigy of a person carefully hidden in the well. He brought it away with him and it turned out to be none other than the long lost statue of St. Maelruain.”

I’m not quite sure I understand Foley’s next comment;

‘It represented St. Rogan, the guard of the Franciscan Order of the present day. Mr. Grattan-Flood who had examined the statue dated it from the fourth century.’

So was it Maelruain, or Rogan? And how would they have been recognised? Blather shall endeavour to solve this ambiguity.
Apart from that, we have two classic tales of discovery, however apocryphal they may be, discountable as tall tales if it weren’t for the fact that Grattan-Flood was said to have examined the statue. It gets even less simple to dismiss when we learn that the tales have gone beyond mere myth, and that the statue was in Crossabeg until some *15 years ago*.
According to Foley, ‘repeated attempts to remove this relic from the parish of Crossabeg’, invariably failed. One person tried bring it across the Slaney by boat – before there were bridges – and met with ‘such storms and bad weather that he did not succeed in accomplishing his aim’.
So the statue was was left with David Curran, a local farmer, and was eventually passed to his great-granddaughter, Mrs Kathleen Weldon, until it was stolen, and has of yet, never been recovered. 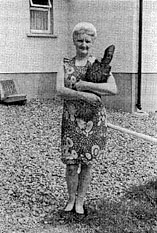 It has to be said, it’s a little bit bizarre when you stumble across a *Raiders of the Lost Ark* scenario in your own neighbourhood. Assuming for a moment that for *some* reason, the statue *cannot* be removed from the parish, that would suggest its current hoarding somewhere within the parish boundaries. If the theft was a discriminate attempt to attain the statue, to what end was such a crime committed? For monetary gain, or something far weirder?
Foley’s piece ends by telling us of how the only way of finding the well today is by a little wooden cross, due to the ‘swampy nature’ of the ground. On the 7th of July – St. Maelruan’s Pattern, a celebration used to be held in the area, with much singing and dancing around a bonfire until dawn. The term ‘pattern’ for those who are unaware, is used here the context of a religious celebrations — modern parish pattern days usually consist of mass being said outdoors at the local graveyard, where the graves have been especially decorated. Curiously, my OED doesn’t have this interpretation.
While this 7th of July party was dedicated to the *presumably* Christian St. Maelrun, around 1875, the then parish priest, Father Harpur denounced the goings-on, and subsequently made sure that such heinous entertainments were abolished.
Dave (daev) Walsh
Written on July 22nd, 1998

Chief Bottle Washer at Blather
Writer, photographer, environmental campaigner and "known troublemaker" Dave Walsh is the founder of Blather.net, described both as "possibly the most arrogant and depraved website to be found either side of the majestic Shannon River", and "the nicest website circulating in Ireland". Half Irishman, half-bicycle. He lives in southern Irish city of Barcelona.
previous article
On the Boyle
next article
Mammoth Hunt: The Giant Elephants of Nepal