The Irish Hellfire Club: No Smoke Without Fire

Overlooking Dublin city from the south west, at an altitude of 383m (1264ft), is a foreboding ruined hunting lodge, marked on Ordnance Survey maps as the ‘Hell-Fire Club’. Current urban lore insists on telling us that it was – and still is – a site commonly used for the practice of ‘Satanism’ and other occult activities, and that the Devil himself made a brief appearance there at some unspecified time in the past. In a story similar to the one attached to Loftus Hall (a haunted house on the Hook Peninsula), a mysterious stranger seeks shelter on a stormy night, and a card game ensues. A member of the household drops a card, and sees that below the table, the otherwise affable and charming visitor has a cloven hoof. His or her screams made the Devil ‘aware of her discovery, and he at once vanished in a thunder-clap leaving a brimstone smell behind him’ (Seymour and Neligan). 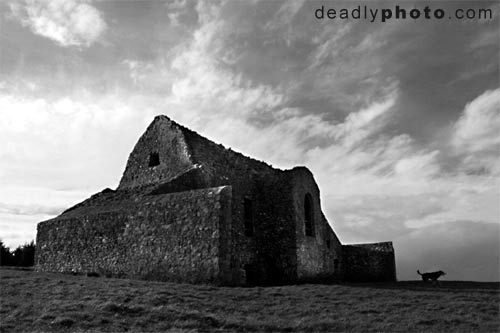 The elusive and rather ambiguous exploits of the Irish Hell-Fire Club have intrigued Blather for some time. While for most people the name denotes a ruined hunting lodge in the forested Dublin mountains, visited on Sundays by hordes of escaping suburbanites, it originally refers to an organisation alleged to have devoted to their time to the practice of unbridled hedonism.

Weston St. John Joyce mentions Mount Pelier on page 123 of his The Neighbourhood of Dublin, published in 1912:

‘Making our way over the gorse and heather up the slopes of the hill from Mount Pelier House, we at length come into view of the old ruin on the top – an interesting and conspicuous object from afar, but proving a most unprepossessing structure on closer acquaintance. It is variously known to the Dublin folk as the Hell-Fire Club House, the Haunted House, and the Shooting Lodge, although it really possesses no valid claim to any of these designations, it having been built, apparently as a mere freak, for use as an occasional summer residence, by the Right Honourable William Conolly of Castletown, Speaker of the Irish House of Commons, about the year 1725, shortly after he purchased the Duke of Wharton’s estate in this neighbourhood.’

St. John Joyce mentions another Satanic appearance, due to the use of part of a local megalithic standing stone in the construction of the lodge:

‘Shortly after the house was built, the slated roof was blown off one night in a tremendous storm – by the agency of the devil it was popularly believed, on account of the sacrilegious conduct of the builder in desecrating the old carn. But Squire Conolly was not a man to be easily beaten, and so he set to work and built a massive arched roof of stones keyed together as in a bridge, and of such impregnable strength that it has effectually withstood the efforts of wind or devil – whichever it was – from that day to this.’

St. John Joyce also expressed uncertainty with regard to the tenuous occult significance of Mount Pelier:

‘With regard to one of the names which seems to have taken the fancy of the public, it is to be observed that while the Hell-Fire Club may have held some of its meetings in this house, it is tolerably certain that it was never one of the regular meeting-places of that mysterious and iniquitous body, the ordinary rendezvous of which was the Eagle Tavern on Cork Hill.’

As with the exploits of other larger than life characters, the stories of the Hell-Fire Club vary, but most mention the Eagle Tavern, once on Cork Hill (by Dublin Castle) as the main centre of operation, where the “Bucks” swigged Scultheen, a ‘special mixture of whiskey and butter’. “Bucks” were a class of gent ‘”whose whole enjoyment and the business of whose life seemed to consist of eccentricity and violence”‘(Somerville-Large).

Somerville-Large tells us ‘popular supposition associates [The Hell-Fire Club] with the gaunt ruin on top of Montpelier Hill, and the odd black mass have taken place in Mr. Conolly’s airy shooting lodge. The club is supposed to have set fire to the place to give it a more hellish appearance, while the reputed burning of a lady in a barrel sounds like an outdoor occasion’.

Behan also mentions the story of a priest, who stumbled across the club’s fun’n’frolics (there’s no mention of what he was doing wandering about Mount Pelier Hill at night), and discovered that the centre of attention was a huge black cat.

‘Breaking free from his captors the cleric grabbed the cat and uttered an exorcism which tore the beast apart. A demon shot up from its corpse. Hurtling through the roof it brought down the ceiling and scattered the assembly.’

Behan also mentions that Conolly ‘is said to have met the devil in the form of a “black man” in the lodge’s dining room, which is probably a variation on the card-game story.

Unfortunately, Behan doesn’t provide us with references or basis for his theories (well, discounting the Cthulhu Mythos stuff). He also claims that Parsons was also known as Jack St. Ledger – which Blather deems doubtful – Colonel Jack St. Ledger seems to have been a real person (who, according to Somerville-Large, was so obsessed with the Duchess of Rutland that he would drink the water in which she had washed her hands). 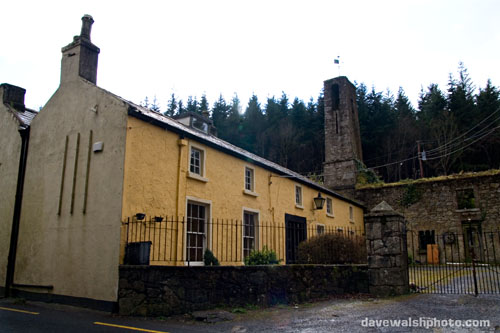 The website of Killakee House, a restaurant further down Mount Pelier Hill, tells us some more about of the Hell-Fire Club shenanigans, including of the burning, which they believe occurred around 1740, while it was in the hands of Richard Chappell ‘Burn-Chapel’ Whaley, so called because of his Sunday entertainment, which entailed riding around setting fire to the thatch of Catholic
chapels.

Anyway, the folk at Killakee tell of how, following a black mass, a footman spilled a drink on Whaley’s coat, after slipping on the mass of drunken bodies on the floor. Whaley poured brandy upon the man, set him alight, and soon had the entire building ablaze. Most were too drunk to escape.

The webpage continues to talk about Whaley’s death at the age of 34, in 1800, no mean feat for a man who burned down a building in 1740. I would imagine that they have confused him with his son, Buck Whaley, famous for having travelled to Jerusalem and back for a bet (no mean feat in 1789). “I was born with strong passions” begin Buck Whaley’s Memoirs, “a lively imaginative disposition and a spirit that could brook no restraint. I possessed a restlessness and activity of mind that directed me to the most extravagant pursuits; and the ardour of my disposition never abated until satiety had weakened the power of my enjoyment”. Whaley junior did indeed die in 1800 at the age of 34, following a masochistic squandering of his personal fortune.

Killakee House itself is no stranger to weirdness, with mention of spectral black cats (related to the sacrificed moggie of Hell-Fire Club days?), and the discovery of a dwarf human skeleton below the floor in 1970.

And so the ambiguity surrounding the Dublin Hell-Fire Club abounds. Does the Hellfire Club building really have anything do with the club of the same name? Were the members (of the Irish branch) students of the occult, or students of drunken revelry?

Whatever about the various specifics, it is entirely possible that some meetings of the club took place at the now ruined building on Mount Pelier Hill, even if only briefly. To quote V.S. Pritchett:

(See also Hellfire and Harlots, the Blather issue following this one, and Accidental Satanists, Dave (daev) Walsh’s talk at Fortfest 99)

Recommended: Geoffrey
Ashe – The Hell-Fire Clubs: A History of Anti-Morality

FOR THOSE OF A DELICATE NATURE
Blather co-conspirator Paul Clerkin has astutely observed this entry in St. John Joyce’s The Neighbourhood of Dublin (a copy of which now resides in the Blather library), concerning an apparent rodent problem in 18th century Dublin suburbia…

‘Walsh’s Impartial News Letter of 16th May 1729 contains the following curious item of news in regard to this neighbourhood: – “This morning we have an account from Merian that a parcel of these outlandish Marramounts which are called Mountain Rats who are now here grown very common… walk in droves and do a great deal of mischief.” The account then goes on to relate how these mysterious pests devoured a woman and a nurse-child in Merrion and that the inhabitants “killed several which are as big as Katts and Rabbits… This part of the country is infested with them. Likewise we hear from Rathfarnham that the like vermin destroyed a little Girl in the Fields.”‘

PAGAN BASHING?
It was just last week that we that discovered one web-site, which linked itself to us, has accused Blather of ‘pagan-bashing’, a curious pastime which we are not consciously engaged in partaking of.

In fact, the Blather article in question – the Hallowe’en
Issue – dealt with a backlash against the fictional work of Bram
Stoker. Despite this, it has been listed amongst the ‘ [link dead: http://www.mills.edu/PEOPLE/ug.pages/boza.public.html/danica.public.html/harassment.html] pagan-bashing web siteswe’ve found so far’.

Chief Bottle Washer at Blather
Writer, photographer, environmental campaigner and "known troublemaker" Dave Walsh is the founder of Blather.net, described both as "possibly the most arrogant and depraved website to be found either side of the majestic Shannon River", and "the nicest website circulating in Ireland". Half Irishman, half-bicycle. He lives in southern Irish city of Barcelona.
previous article
Straddling Two Worlds: Lake Monsters and other weird creatures
next article
The Irish Hellfire Club: Hellfire & Harlots