As mentioned in *Good Puzzle* a couple of weeks back, there was a spate of Dublin UFO sightings *predicted* for 0500 hrs on January 30th. Dare we admit it, but this insomniac was indeed awake at the time (after having spent the evening lurching about the streets). We saw nothing in the sky other than the manner of thing that one expects to see (stars, clouds, aircraft, etc.), and as we didn’t hear tell of any radio, TV or newspaper reports afterwards, Blather would only be *thrilled* to hear news to the contrary…

A report of a rather bizarre nature (as if anything we report *isn’t* bizarre) has come to us by way of the noble folk at Astronomy Ireland, originating with a certain Paraic O’Loughlin. He tells us that on December 27th 1998, he was motoring to Castlebar, Co. Mayo, along with three fellow passengers. At about 1910 hrs, whilst on the Tuam (Co. Galway) side of Claremorris, they were startled by two ‘very bright flashes about 10 seconds apart’.
One of the people in the car ‘noticed a very bright persistent light following the first flash which lasted about 6 seconds’. As the second flash happened, they pulled the car up at a gateway. It seems that the ‘persistent light’ remained for over 4.5 minutes.
No one had a camera with them, but Paraic returned a few days later to take some shots from the gateway with his digital camera, and from memory drew the ‘persistent light’ into the photograph, asking the other witnesses to verify the accuracy. They are all in agreement that the image shown ‘is as close as possible’ to the phenomenon they witnessed. 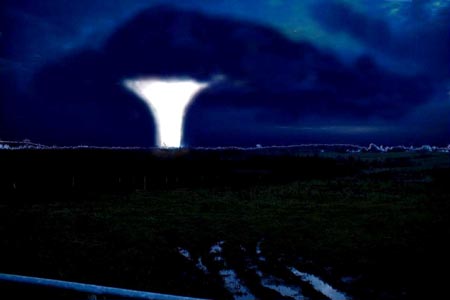 *Narrow Bands*
While looking at this strange light, they all noticed ‘narrow bands of coloured light rotating in a clockwise direction around the column’, as well as part of it. These bands briefly radiated outward at about 45 degrees to the base of the column, while continuing to rotate.
We’re not sure how Paraic made these reckonings, but he says that that ‘given the distance of about 1-1.5 miles [1.6-2.4km], we estimated the base of the column to be between 50 and 75 yards [48-70m].
Paraic and his friends contacted the E.S.B (Electricity Supply Board), who assured him that ‘no device was capable of producing that amount of power’ without their knowledge. Paraic then says that there *were* power outages in the area that night due to the extreme weather conditions [see *Storm Chaos* link below].
Working from Ordnance Survey maps [presumably 1:50000], Paraic drew a line between Claremorris and Crossboyne, about 2-3 miles [3.2-4.8km]. The sighting happened close to this line. On consultation with the Gardai, they opted to contact Mid West Radio, who mention it on the air, along with a taped conversation with Paraic. From this they have learned that others have seen the flashes, including three who saw the column, one driving from Galway to Clifden, one on Lurragh hill just outside Portumna and the other working at Breafy House Hotel in Castlebar.
Paraic is baffled, and welcomes any comments…
He can be emailed at padraigol@tinet.ie.
*60,000 homes*
Whatever this light was would have had to have been witnessed over a huge area, during a period of severe weather conditions in which two men died from tree falls, and 60,000 homes were without electricity. But as Blatherskiver John Maguire muses:
‘I am concerned at their other witnesses geographic location. They are giving us 4 points on a square area up to 70 miles by 70 miles. 3 other witnesses for an ENORMOUS 5 minute burst of light in a relatively populous area in DECEMBER at 7 o clock in the evening. During a blackout? No residual lighting, no street lighting. Hmmmm. This should have been seen by almost everyone. Portumna, Claremorris and Clifden as I don’t need to explain to you are quite a ways from each other…’

*Sprites?*
Us Blatherskites have mused much upon this matter – could have been some kind of terrestrial ‘sprite’ – as in an ‘Upper Atmospheric Optical Flashes Excited by Thunderstorms’? Sprites are large globs released into the upper atmosphere during large cloud-to-ground lightning discharges – a phenomenon only recognised since 1989.
Hopefully we can elicit more information from Paraic on this matter – for instance – was it cloudy that night? Was it windy at the time? Was there *thunder*? It’s even difficult to rule out sightings of Iridium flares, which have nothing to do with burning elements, but rather the name of a telecommunications company responsible for the placing of a series of low orbit satellites. There’s currently 66 of them in a near-polar orbit some 485 miles (780 km) above the earth.
Usually satellites can be seen moving steadily across the sky, winking. Iridiums, however, occasionally brighten – which even NASA feel will contribute to UFO sightings. The satellites flare up for 5-20 seconds, then vanish…as Jim Foster of NASA Goddard Space Flight Center says:
‘Astronomers use an apparent brightness magnitude scale to determine how bright one object is compared to another. On this scale, the faintest stars that we can see with the unaided eye have a magnitude of about 5. The brightest star, Sirius, has a magnitude of -1.4, Venus at its brightest can reach a magnitude of about -5, and the full moon is approximately -12. Iridium flares can attain a magnitude of -7, which is about 120 times brighter than Sirius! Some observers have mentioned that when the satellite “flares,” it looks like a headlight beam shining in the darkness.’
*Silver-coated*
This is due to sunlight reflecting from the satellites towards Earth, and the best time to see them is after dusk or before dawn, when the Earth is dark, but the satellite is still in sunlight. Glint from satellites is nothing special, but the Iridiums have silver-coated Teflon antennae.
‘Since the axis of the satellite is constantly oriented vertical to the Earth’s surface, the antennae plates are aligned in such a way that they can produce a direct, specular (mirror-like) reflection of the Sun’s disk. From Earth, this reflection may be viewed only from a narrow, approximately north to south swath, which is on the order of twenty or thirty miles (about 32 to 48 km) in width.’
It’s possible to predict when to see each of these satellites – we know where both they and the sun are…the German Space Operations Centre has a website that allows web users to determine the details for spotting most satellites, including Iridiums [see below]. It doesn’t let us go back in time, but it does let us know that the optimum time for seeing Iridiums from the Castlebar area at the moment is from 0500-0800 hrs and 1700-2000 hrs.
Now, before waves of protest break free from the angry masses, let us declare that the above meanderings are just theory – we’re merely examining possibilities. If Paraic’s description – and picture – are indeed accurate, we would doubt that it was a satellite, even an Iridium. However, if the source was terrestrial, we would tend to agree with the ESB – it would use an enormous amount of electricity. If it was some monstrous burst of winter lightning, has there been evidence found of it on the landscape – and how could it have lasted for such a length of time?
+Notes+
*Good Puzzle*
Astronomy Ireland
Storm Chaos – Irish Times December 28th (Reg required)
Electricity Supply Board
An Garda SÃ­ochÃ¡na – Ireland’s Police Force
Wikipedia: Iridium satellite
Iridium Flares (Wikipedia)
Bolts From the Blue – One of the most dangerous types of cloud to ground lightning

The disembodied collective editorial voice of the only really nice website in Ireland.
previous article
Good Puzzle
next article
Here be Dragons