Roman Ireland: What did the Romans ever do for us?

Is Roman Ireland nothing more than wishful thinking? Exploring Ireland’s forbidden archaeology is a tricky business… 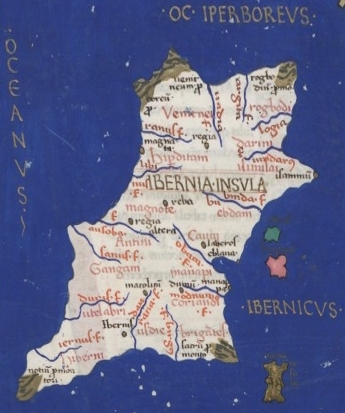 On a pleasant Sunday morning early in 1996, I was traveling to work, when my jaw hit the rather grubby floor of the bus on which I was sitting. The reason for my cartoon like gob-flapping was the banner headline from The Sunday Times.

I was, at the time, studying in what is now known as NUI Maynooth, (formerly known as just good old ‘Maynooth’) for a degree in Classics and English, so the newspaper headline was of some interest to me. It claimed that conclusive evidence had been discovered – or at least had been made public – that could lend proof to that most heretical of archaeological whisperings. I refer, of course, to the greatest of Irish historical conspiracies: the theory that at some long forgotten time in our past, deep in the murkiness of the Irish Iron age, the absolutely unthinkable had taken place. The Romans army had invaded and colonized the island of Ireland.

To say that I was excited by this dramatic revelation would be the understatement of the decade. I am, by nature, what many would call historically inclined, or perhaps what some would describe as enamored with the past. To put this more baldly, perhaps we should turn to the choice words of one of my friends who summarised the thoughts of all present when I tried (vainly) to regale them with the story of the new evidence about Romans in Ireland: he called me “a world class geek”. Matters such as these tend to get me into a book wormy flap and this story was the granddaddy of them all: alleged historical proof that the Irish of the Iron Age, the mighty Celts themselves, had fallen to the Roman Empire, much like the rest of the known world.

As I scurried into the National Museum of Ireland on Kildare Street (where I was working at the time) I was practically dribbling with hysteria. Every book on the museum shop shelf would have to be re-written. All the exhibitions would have to be re-thought. Our whole concept of what it was to be Irish, our sense of who we were was about to be dramatically re-defined…Right?

Sadly, my enthusiastic search for evidence was to be short-lived, and was to be replaced in the coming weeks with another sentiment: a combination of bewilderment and indignant rage…

The flap
The Sunday Times article (hereafter the ST article) of January 21st 1996 came as something of a shock to most. The banner headline read as follows:
“Fort discovery proves Romans invaded Ireland.”

The back page continuation of the article read much the same:

There could be no mistake; this article was effectively sounding the clarion call for a wholesale re-writing of Irish history. The content of the article, by Ciaran Byrne and John Mass, was startling. Complete with a fetching illustration of a rather swish looking Roman soldier in full uniform standing in front of a strange hybrid Romano-Irish fort, some illuminating facts about recent Roman finds and a welter of quotes from some heavyweight academics, it delivered its brutal message in bald terms. Ireland had not lived in a ‘heroic Celtic twilight on the fringes of the Empire’ as was normally supposed, but had been victim to the same fate as much of the rest of Europe, having bent its’ knee to the yoke of all conquering Rome.

The article’s central point of contention concerned a site known as Drumanagh (also called Loughshinny), near Rush, fifteen miles north of Dublin City. The site in question is a beautiful promontory covering 44 acres of land. This ‘nondescript patch of land’ indicated that ‘the country (Ireland) was, after all, invaded by the Romans’. The article stated that this was one of the most ‘exciting Roman discoveries of the century’ and that furthermore, it ended ‘the established belief that Ireland remained free of Roman influence’.

The ST article then stated that the both the location and significance of the fort had been known to a small group of archaeologists and the National Museum of Ireland for more than a decade, but that they have kept it secret. (My emphasis). Continuing, the article explicitly describes the evidence for Roman presence, namely the artifacts unearthed at the Drumanagh site. These are “large Copper ingots, ornate jewelry and valuable ornaments”, all of which are being held at the National Museum of Ireland, but remain in storage and not on display. Also, apparently, are also some Roman coins stamped with the names of the Emperors Titus, Trajan and Hadrian ‘suggesting Roman involvement in Ireland extended at least from AD 79 to AD 138’.

Having listed the material, the article starts ratifying itself by the use of academic backing. This comes from Barry Cunliffe, of European Archaeology at Oxford University, Barry Raftery, Professor of Archaeology at University College Dublin and Richard Warner, Keeper of Antiquities at the Ulster Museum.

In this particular article Richard Warner’s’ thoughts and theories are quoted extensively. According to the ST article Warner believes that Ireland may have been invaded by a force composed of exiled Irish and British adventurers with the support of Roman weapons, training and organisation. This possible invasion and attempted colonization may have been led by a prominent historical figure called Tuathal Techmar. The size of the supposed fort ‘suggests the Romans attempted to control Irish internal politics during the period with a series of military campaigns designed to carve out kingdoms in the country for exiled Irish nobility”. Furthermore Warner, it seems, believes that a further Roman military campaign ‘…led to the establishment of Cashel, now a key town in Tipperary’.

In the ST article, evidence of Roman involvement is allegedly further confirmed by several references from antiquity regarding Ireland, notably the section of Tacitus’ writings which deals with Agricola and a remark from Juvenal about Roman arms being advanced beyond the shores of Ireland. We are told that archaeologists are now eagerly awaiting a complete excavation of the site in question. The article finishes with a quote from Warner: ‘Drumanagh was the door of the Roman intrusion which then became a town over the next three centuries. It might compare with London or any other Roman sites which started off as part of a military campaign’.

The backlash
As might be expected, the ST article caused an uproar. Six months later, other articles were still appearing in journals such as Archaeology Ireland, attempting to redress the flap that had succeeded the ST article. On January the 24th, three days after the ST article, Professor Michael Herity published a response in the Irish Times. The banner headline was as forceful as the one in the ST; ‘Roman invaders were more likely native Irish traders’. The sub heading, which I will quote in its entirety, is a perfect abstract of the main article:

“Professor Michael Herity believes the recent archaeological evidence from the site in north Dublin suggests a rich Irish emporium trading with the Roman world and not an invasion by its legions.”

Professor Herity summarised the content of the ST article and all of its implications and added his own interpretation of the scant evidence that was cited the previous Sunday.

In doing so, he made some shrewd observations about the ST article and some of its shortcomings. In particular he referred to the statement by Mass & Byrne that knowledge of the site had been kept under wraps by the National Museum of Ireland. This is, as Herity pointed out, completely incorrect. Drumanagh and word of its purported artifacts are well known in both public and academic circles, and have been discussed in tortuous detail since the 1970’s.

Herity summarizes this best when he says “Loughshinny has been well-known for many years and Samian ware found about the site in the 1950’s long ago raised the question of its Roman affiliations. The site was in the headlines in the mid 1980’s when the Commissioners of Public Works put a preservation order on it”. This is indeed true – the Irish Sunday Press of July 7th 1985 carried a very prominent article about the National Museum of Ireland’s actions in recovering some of the artifacts that were found at Drumanagh in the late 1970s and were then, illegally, put up for auction in London. Staff from the National Museum of Ireland’s Antiquities division had, to quote Eamonn Kelly (the Museum’s Keeper of Irish Antiquities), ‘played a blinder’ in stopping the sale of the material.
Back to 1996: The debate raged on, both in the academic and popular press about the profound implications of the ST article. Professor Barry Raftery’s article in the Spring 1996 issue of Archaeology Ireland, which sought to respond to the ST article, is a well-written and persuasive piece of text. It seems as though Dr. Raftery had wielded common sense like a scalpel cutting through the hyperbole and the hot air. His arguments are detailed and primarily focus on three crucial things. These are:

His examination of these three areas, as well as other evidence, culminates in a direct statement, which is pretty unambiguous; ‘…there is nothing to support the notion of a Roman military incursion’. This would appear to be a definitive statement on the subject from one of Ireland’s leading experts on the Iron Age period.

From an initial reading of this article, you could be led to suspect and conclude that Professor Raftery does not hold any credence with the invasion hypothesis, in fact you could not be blamed for assuming that he is quite opposed to it.

previous article
Virus Hoaxing: Scrub Your Mind
next article
How I Failed The Turing Test Without Even Being There