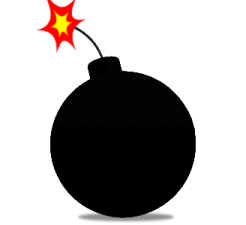 Lots of lightning in the news. Lots of lightning in the news. The Bulgarian president has personally involved in the plight of a family, after their home was struck by lightning nine time Then there's the British golfer, Vincenzo Frascella who had his umbrella struck by lightning on both the 14th and 17th holes of Orton Meadows Golf Course in Peterborough last Wednesday. And the British copper, Carrie Kwasniewski who was struck while on duty...

Feral ferrets, belligerent badgers in the news... Been some great, improbable 'animal attack' stories in the news in recent days. These are both from the UK: Hungry ferret causes rail scare A hungry ferret has caused panic on a train by racing around carriages and eating the driver's lunch, a train company says. From BBC News Badger rampage injures five A rogue badger attacked five people during a 48-hour rampage in a quiet suburb. One man required two skin graft operations, after the badger woke him up and attacked him when he went outside to investigate. More on the BBC website Incidentally, I've been appalled by the amount of dead badgers I've seen on Irish roads this year. I've started a 'dead badger watch' on p45rant.com.