A couple of rocks in a field. Really!

A few years ago, during a May bank holiday weekend, two friends and I were mountainbiking around part of Co. Wicklow. After climbing up through the Devil’s Glen, a muddy forest track spat us out onto an innocuous road. We headed for the next hill, but got confused at a fork in the road. While consulting the map, I spotted a couple of standing stones in a field, and pledged to find out more about them.
That junction was actually in Moneystown, a hamlet that I’ve passed through many times since, usually at about 30mph – in a bicycle race. Recently, I’ve passed through in a more lesiurely fashion, and made time squeeze off a couple of shots of these simple, but elegant stones. The bear the hint of markings on them, but theses have been obliterated by the weather, so it’s hard to make out which lines are man-made, and which are part of the natural rock.
There’s no telling how old these things are, or what their use was. I kinda like the ‘not knowing’. Negative Capibility, if you like.
‘Negative Capability, that is when man is capable of being in uncertainties, mysteries, doubts, without any irritable reaching after fact and reason.’
– Poet John Keats, letter to George and Thomas Keats, 21 December 1817 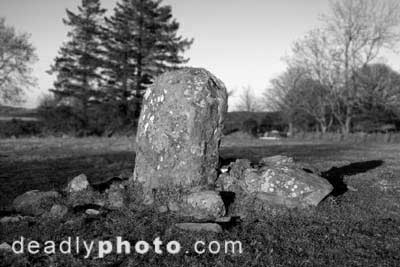 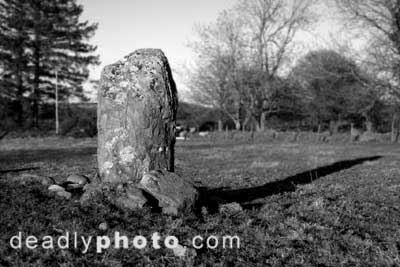 Related ‘Megalithic Travels’ thread on our discussion board »

Chief Bottle Washer at Blather
Writer, photographer, environmental campaigner and "known troublemaker" Dave Walsh is the founder of Blather.net, described both as "possibly the most arrogant and depraved website to be found either side of the majestic Shannon River", and "the nicest website circulating in Ireland". Half Irishman, half-bicycle. He lives in southern Irish city of Barcelona.
previous article
Nasa finds Planet X
next article
Ballyedmonduff Wedge-Tomb in the Dublin Mountains