How To Drink Absinthe

Dave finally gets his finger out, and publishes an article on the legendary green fairy.

all images from Aberration
of Society

"Got tight last night on absinthe and did knife tricks.
Great success shooting the knife into the piano. The woodworms
are so bad and eat hell out of all furniture that you can always
claim the woodworms did it." – Ernest
Hemingway

So much has been written about absinthe,
yet it’s so poorly understood. Absinthe literature is full of
yarns of ear loss, family murders and ruined livers. Books and
museums are dedicated to absinthe spoons and glasses. There are
reviews of the various flavorings and essential qualities, and
comparisons with other drugs and liquors. We’re told about the
famous souls who drank Absinthe – Van Gogh, Rimbaud, Wilde, Picasso,
and others. Coffee table absinthe books are piled with prints
of absinthe advertisements and admonishments, and paintings by
the artists who drank it, showing languid subjects with thousand-yard
states. Today’s magazines advertise absinthe dealers, fake absinthe
and home made recipes. Websites chatter on about illegality and
availability.

The history and tangible facts are laid our
before us, and today’s absinthe drinker is expected to show reverence
to a former fin-de-siecle culture. The drink makes one quite the
literary genius, apparently. Since the maelstrom of literary Paris,
wannabe writers have missed the craft for the booze, assuming
that knocking back a few green fairies will set the creative juices
flowing. Drinking might set one to work on that difficult first
novel, but it hardly promises quality.

In the rush to emulate ancient excesses,
we seem to have forgotten the point of it all. What does absinthe
do to us? What is the absinthe experience? Why do we drink it?

Well, it’s not like other drinks – it’s more like a drug. Most
brands have a very high alcohol content, but that’s only part
of the story. Absinthe also contains wormwood, a herb which grows
wild all over the world, traditionally used to treat digestive
problems, and even as a restorative of impaired cognitive functions,
like thinking, remembering, and perception.

About 50 percent of essence of wormwood is made up of a chemical,
thujone, which have some have likened to THC (the active ingredient
of cannabis), mainly because of it’s similar chemical structure.
The effects are different – thujone has stimulative characteristics,
while THC is more of a soporific.

Other drinks and plants contain thujone to some degree – vermouth,
benedictine and chartreuse, and dalmatian sage oil and cedar leaf
oil. It’s thujone that gives absinthe it’s real kick. Not that
I’m recommending that anyone go out and OD on thujone; it’s claimed
to cause – in high doses – delirium, convulsions, seizures, paralysis,
brain damage, renal failure and death. A good night out, by anyone’s
standards.

However, laws keep thujone contents at less than 10 parts per
million, making the alcohol by far the most toxic component.

I learned about absinthe the hard way. My first encounter was
with a bottle of homemade stuff. It had the vital ingredient,
wormwood, ergo it was deemed authentic. Consumed neat, it tasted
vile, and I couldn’t stomach it. Days later. some friends tried
to finish it off, but poured most of it into the carpet. One of
the drinkers broke into a nearby house ‘to make a phone call’,
despite nearby telephone booths.

A couple of years later, the absinthe craze
takes hold of Britain. Visiting Scotland, I’m whisked into an
Edinburgh bar by some friends. The room is dark, and blue flames
erupt and die along its length. The bar staff dip spoons in the
emerald green liquor, then coat them with sugar before setting
them alight with a candle flame.

The sugar browns and crackles, before being
plunged into the absinthe. The heroin chic of "cooking up"
has a perverse appeal, so we knock back several fast rounds of
Hills
absinthe. Czech made, it tastes like mouthwash, and has a
low wormwood content. Outside, in the cold February air, the booze
kicks in.

As we walk, one of my friends provides an
incredible dissertation on the relationship between Scottish football
and Northern Irish politics. Words pour lucidly from him, his
mind lubricated. Too bad he kept slamming into parked cars.

I wasn’t convinced by this experience. It
wasn’t the calm lucidity that I had expected from "The Green
Fairy." There was a certain sharp alertness, but otherwise
we might as well have been drinking some other crazy spirit, like
Jagermeister.

A year later, a club opens in a Dublin theater,
hidden down a back street. It’s called Club Absinthe, and serves
up Sebor,
another Czech absinthe. It’s a thicker, darker, and stickier.
There are no flames on the go here, but you can have ice if you
like. This is real absinthe, containing less alcohol than Hills,
but with plenty of wormwood, so there’s a proper speedball effect.
I sip it neat, and watch sultry chanteuse Camille
O’Sullivan perform numbers from Weil and Brecht’s Threepenny
Opera.

And it works. Some of my friends stick to
beer, or wine. Come 1AM, they’re lolling about, ready for a taxi
home to bed. I’m scheming, plotting, making devious plans, lucid
and calmly awake. The night is young, and there’s trouble to be
made.

Turns out the club impresario is importing
the stuff, so I get ahold of some Sebor for a couple of wild decadent
parties at my house. Though I’m the host, I manage to plot a perfect
bell curve of intoxication by taking my time with the absinthe.
Other guests are utterly trollied by 10pm, while I seem to be
imbued with that same calm alertness, and, I pray, a helping of
urbane sophistication. After 6 or 7 hours on the green stuff,
I still manage to talk the police into leaving us alone, after
they respond to a noise complaint. The neighbors kick up after
two absinthe-fueled maniacs are heard screaming in the front garden,
but when the cops arrive, they hear only Serge
Gainsbourg hits from the 60s.

I begin to read up on absinthe, trying to
understand the subtleties of different brands and preparations.
I’ve seen beyond the mere mad drunkenness, and I want to know
more. This doesn’t stop me from getting ossified on the stuff.

I’m in Barcelona, mixing my drinks. It’s
June, it’s hot, and I’m in a bar in the Plaça Real with
two English nurses and a Spanish waiter. I’m at one end of the
bar discussing absinthe with a barman, the waiter is at the other
end, buying something that looks and smells like absinthe, but
comes from Mallorca, and is made from olives. Minutes later, we’ve
downed both, and are all outside, holding onto the side of a fountain
which seems to be moving.

With absinthe, instead of blacking out, there’s
usually a skeleton crew left in control of the brain. In my case,
after several kinds of booze, my brain is only barely responding.
The night dissolves into mush, I lose the others, and stumble
onto the Rambla, ripe for a mugging. I find a taxi to take me
the crooked mile to the hotel. The absinthe effect on my brain
seems to get me home, despite the drunkenness. The next morning,
with no hangover, I stumble into a delicatessen on the Calle de
Ferrán, and buy two bottles of Deva
Absenta.

Deva becomes the absinthe of choice for me.
Made in Barcelona, it has a moderate alcohol content (50% vol.)
and consumed carefully, provides a serene sense of calm, and a
self-assuredness. It’s a sure confidence booster, but more inclined
to provoke silence and wonder in the drinker, rather than the
self-centered idiocy of cocaine. And it "louches" beautifully.

Louching, where a sugar cube on a spoon is
held over the glass of absinthe and cold water slowly dribbled
onto it and into the glass, plays a major part of the absinthe
experience, and is a way of marking quality before imbibing. In
the bottle, the drink is usually an clear emerald green, but in
most paintings or dramatic representations, it’s a thick mint
green. There’s a good reason for this.

When ice cold water is dripped into good
absinthe, or an ice cube added, the emerald green spirit clouds
into a milky, minty green. According to writer Phil
Baker, this is because "the water upsets the balance
of alcohol and herbal matter, making the essential oils precipitate
out of the alcoholic solution into a colloidal suspension."

That’s the science bit. Once the craft of
preparing absinthe is perfected, the absinthe experience becomes
a ritual to be shared. Make an absinthe for a visitor, then watch
their eyes follow the swirling tendrils of the green fairy’s robes.
Not only do the water and sugar make the absinthe more palatable
for those with sensitive tastes, but they also arrest the immediate
effects of the alcohol. My current stash includes a bottle of
La
Fee, a French absinthe, sold as ‘Spiritueux aux plantes d’Absinthe’
in France), which is a whopping 68% vol. A couple of neat shots
of La Fee and you would be on your ear. It’s also a good idea
to forgo any other alcohols before hitting the absinthe. A few
beers, and your body becomes too torpid to enjoy the effects.

With water and sugar, absinthe becomes a
drink to be savored, and sipped. The aniseed flavor cleans the
tonsils, and stings the tongue into pleasant numbness. There’s
a small weight upon the chest, while the stress of the day washes
away behind the eyeballs. As the drink kicks in, the facial muscle
relax, and drinkers’ movements become languid, yet confident.
A buzzing permeates through the toes, fingers and lips. I don’t
know what Hemingway was drinking, but I’ve never gotten "tight"
on absinthe.

Yet for all the languorous physical effects,
the mind stays keen. As the clutter of life drops away, the drinker’s
eyes twinkle as they entertain more lofty concepts, and appreciate
beauty without the twisted eyes of the office cynic. We have reached
our target. If the intake of absinthe is controlled, the drinker
will be up for anything, and won’t need sleep until a reasonable
hour, with little chance of a hangover. I’ve had some great sleeps
after absinthe. Mind you, I’ve had some fine sexual escapades
too.

On the other hand, if he or she starts lashing
the absinthe back, chaos may, and probably will, ensue. 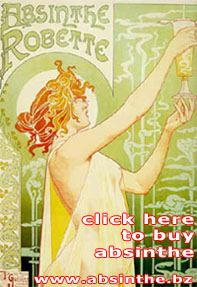 Chief Bottle Washer at Blather
Writer, photographer, environmental campaigner and "known troublemaker" Dave Walsh is the founder of Blather.net, described both as "possibly the most arrogant and depraved website to be found either side of the majestic Shannon River", and "the nicest website circulating in Ireland". Half Irishman, half-bicycle. He lives in southern Irish city of Barcelona.
previous article
The adventures of Jasper the dimension-hopping archaeological cat (Volume 3, Episode 2)
next article
The Editor Surfaces